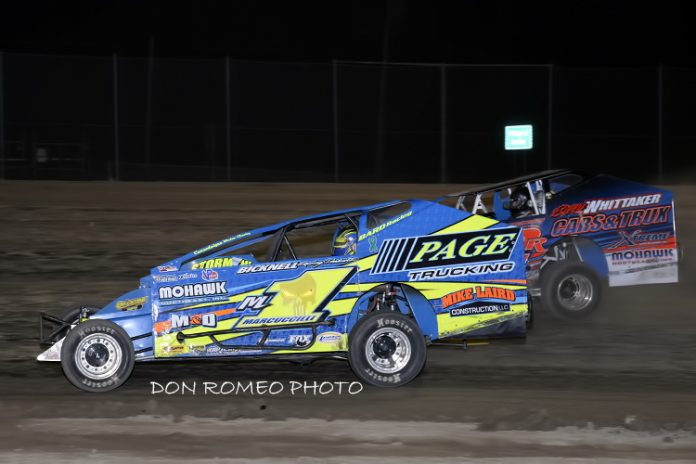 DUNDEE, NY – Dave Marcuccilli used the track position a lap 27 restart afforded him and won a side-by-side battle with Ronnie Davis III to claim a victory in the DIRTcar Sportsman Series Central Region Feature at Outlaw Speedway on Tuesday night. Marcucciili’s victory completed a perfect night with a fast time in qualifying and a heat race win. He also became the third different winner in three Sportsman Series Central Region races this season.

“I think he was on the outside of me and I didn’t see him there, so I kind of crowded him up a little bit,” Marcuccilli said. “He dove down into one and made a little contact. It is what it is. You get down in there and it gets a little rough. It’s no big deal.”

Davis took the early lead while Marcuccilli raced into second. The race was slowed for the second time on lap nine when Kyle Inman slowed on the front stretch. Davis and Marcuccilli raced side-by-side until lap 11 when Davis maintained the lead and Guererri joined the battle up front.

At the halfway mark, Davis led a four-car breakway with Marcuccilli, Gurerri and the Tom Collins Jr. driven No.713. The leaders worked the bottom groove in turns one and two and the high line in the higher-banked turns three and four.

On lap 22 of the 30-lap Feature, Marcuccilli reduced Davis’ lead to 0.2 seconds, but the lead was erased completely a lap later when Guererri suffered mechanical issues and spun on the front stretch.

The ensuing restart was the final one of the night. Davis held the top lane with Marcucilli on the bottom in a side-by-side battle. The two drivers raced that way until Marcucilli nosed ahead and cleared Davis on lap 27. Collins took advantage of the open space on the bottom as did Rocky Warner and created a three-wide battle for the lead. Collins took the runner-up spot, but had no time to track down Marcuccilli who won his fifth straight start at Outlaw.

“I was catching him and I was on him and faster than him, but then we had that one caution,” Marcuccilli said of Davis in Victory Lane. “After that, I was so loose. It took me forever to get back to him and when we started battling the caution came out. The caution helped. Things might have got a little dicey there in lapped traffic. To be able to battle that out with Ronnie and some great cars here is pretty awesome.”

The Eastern Region, which completed its first race on May 28 at Devil’s Bowl (VT) Speedway where Chad Edwards went to Victory Lane, will continue with it’s action on July 15 at Lebanon-Valley Speedway.

The Western Region kicks off on July 25 at Ohsweken Speedway alongside the World of Outlaws Craftsman® Sprint Car Series in the Six Nations Showdown. The Northern Region will host its first race on August 11 at Quebec’s Autodrome Granby.