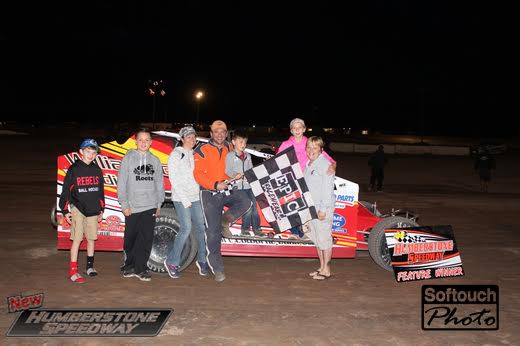 AJ Lewis and Aaron Turkey led the 20-car strong Crate Sprints to the green flag for their 20 lap A-Main with Turkey showing the way. Holly Porter took second from Lewis and started to reel in the leader. Porter would take the lead on lap six. Aaron Turkey battled Jesse McDonald as teammate Dylan Westbrook challenged Jerry Hill for the fourth spot, just as Jacob Dykstra and Allen Gilletta spun, in turn, one to bring out the caution on lap 10. Off the restart, Dylan Westbrook continued to drive to the front of the field as he passed Jerry Hill for fourth, then passed Jesse McDonald and then Aaron Turkey for second and then went after race leader Holly Porter. Westbrook would take the lead on lap 18 after Porter gave up the bottom groove. Westbrook would hold off Turkey and Porter to score the win.

Adam Leslie led Cody McPherson off the start of the PC Works DIRTcar Sportsman feature event Justin Sharp moved into third on lap four after passing Dave Flannigan Jr and beginning to catch the lead duo of Leslie and McPherson. Chad Chevalier worked through the field and battled Sharp for third by the race’s midway point. Chris Storm spun in turn four to bring out the caution on lap 11 for the first time on the night. On the restart, Brad Rouse entered the top six after passing Tom Richau Jr, just as Chevalier passed McPherson to take over second. On a lap 16 restart, Chevalier would take the lead away from Leslie after using the outside of the speedway and Brad Rouse battled with Justin Sharp for fourth place. Emily Puchalski came to a stop in turn four to bring out the caution on lap 20. Chevalier would hold off the field to score his second win of the season.

Rob Pietz took the lead from outside pole sitter Jeff Dayman off the start of the 20 lap feature for the Maple Leaf Foods RUSH Late Models. Tim Gillespie spun in turn four on lap five to bring out the races first caution. Off the restart, Pietz would lead Chad Homan with Sam Pennacchio running in third place. Pietz, Homan, and Pennacchio pulled away from Mike Greene as Jeff Dayman battled Paul Grigsby for the fifth place. Homan looked underneath Pietz for the lead on lap 14, with Homan taking the lead away exiting turn one. Homan pulled away from Pietz to score the win.

Fabio Oliveri and Olivier Larocque shared the front row for the Cosco Haulage Mini Stocks feature with Larocque showing the way. Cole Hardy battled with Leroy Buscumb for third as the lead duo checked out over the rest of the field. The leaders hit lap traffic at the halfway mark. Olivier Larocque would lead all 15 circuits to score the victory.

Mitch Dumont led from the opening green flag in the feature event for the Mike Knapp Ford Pro 4 Trucks. Dylan Llord moved into second with Craig Vlasic running in third. Dumont and Llord pulled away from veteran Danny Wurster and Taylor Vanderzanden over the last half of the race. Dumont would hold off Llord to score the win, his first at Humberstone.

Five minivans took part in the second round of the Minivans of Mayhem Series sponsored by Cooper Motorsports but it was Max Chichuck getting his second win of the season. Jeremy Cooper would finish in second with Neil Martens finishing in third.

NEWS AND NOTES: 81 cars signed in pit side for the racing action. The fans were treated to a pre-race Tailgate Party and car show from Country89. The drivers from the Pro 4 Trucks did a pass the helmet to help defray the costs of a home renovation for Tracy Vlasic, the mother of Pro 4 Truck driver Craig Vlasic, who had her leg amputated during the off-season. The racing action was completed before 10:00 pm.

Humberstone will be back in action on Sunday, July 2nd as Brian’s Tire Repair presents the Canada Day $1,000 to win Showdown special for all classes in memory of Harold Sonnenberg. The Race of Champions Sportsman Tour will make its first stop of the season on Canadian soil plus a 40 lap $1000 to win Enduro. Pit gates will open at 4:30 pm. Grandstands at 5:00 pm with race time scheduled for 6:30 pm.

Mike Knapp Ford Pro 4 Trucks: MITCH DUMONT, Dylan Llord, Danny Wurster, Taylor Vanderzanden, Nate Monahan and Craig Vlasic Did Not Start: Kyle Tomaski
Qualifying Winner: Kyle Tomaski
Humberstone Speedway is located just two miles East of Port Colborne on Highway 3, just 17 miles west of the US/Canadian Border at the Peace Bridge (Buffalo/Fort Erie). For more information, please visit us on the World Wide Web at www.humberstonespeedway.com as well as liking us on Facebook by searching NewHumberstoneSpeedway, following us on Twitter @NewHumberstone and Instagram @HumberstoneSpeedway Don’t forget to bring your portable FM radios and listen to all the action on 90.3FM. You can also call the speedway at (905) 834-4002 or the speedway office at Cosco Haulage (905) 935-2886