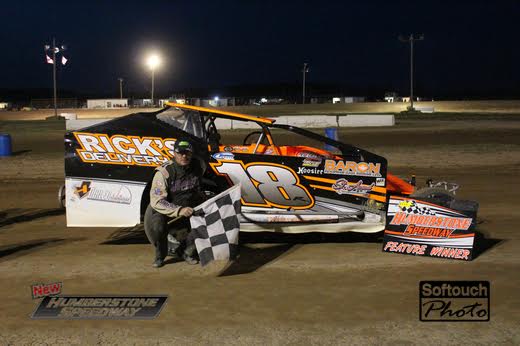 Defending track champion Brad Rouse and young gun Tyler Puchalski set the front row for the 50 lap feature for the Race of Champions (RoC) Sportsman Series with Rouse pulling ahead with Cody McPherson running in second with Adam Leslie in third. Rouse showed the way early on as Justin Sharp passed McPherson on lap four to take over second place. Rouse and Sharp battled for the lead as Sharp for several circuits, with Sharp taking over the lead on lap 11, and would open up the lead of over five car-lengths while Sharp entered lap traffic. Greg Martin spun, in turn, two and Emily Puchalski had nowhere to go to bring out the caution on lap 18. On the restart, Rouse and McPherson would regain the top two spots from Sharp. McPherson, defending RoC event winner at Humberstone, started to close in on Rouse as Rouse used the bottom of the speedway while McPherson was running on the cushion. James Michael Friesen entered the top five just past the halfway mark and moved into fourth after passing Justin Sharp. Chad Chevalier closed in on McPherson for second while working lap traffic as Rouse pulled away from the field. Chevalier and McPherson battled for second as Rouse continued to show the way up front. McPherson hopped the cushion, in turn, one, handing second to Chevalier and then hopped the cushion again in turn three, giving up the third spot to Friesen. Matt Farnham spun in turn four to bring out the caution with eight laps remaining, giving Rouse and Chevalier open racetrack to battle for the win. Chevalier would take the lead on lap 44 exiting turn four. Rouse would regain the lead on a late-race caution and would hold off Chevalier and Justin Sharp to grab the win and the $1000 payday.

The Maple Leaf Foods RUSH Late Models were led to the green flag by Bill Holmes and Sam Pennacchio with Pennacchio showing the way. Off a lap one restart, Chad Homan raced to the outside of Pennacchio and would take the lead away. Kyle Sopaz would take second away from Pennacchio on lap four and would begin to go after Homan. Sopaz would go to the outside and would pass Homan for the lead on lap six. Working their way into the top five early on was Brandon Mowat and Dennis Lunger Jr. Sopaz stretched his lead over the field as Sam Pennacchio was closing in on second place runner Chad Homan. Homan would catch Sopaz and would battle for the lead in the final circuits but it was Sopaz holding off Homan and Mowat to score the win.

Barry Beck Jr led the opening lap of the 25 lap feature for the JC Auto Street Stocks. Billy Bleich Jr would take the lead away from Beck on lap two with Dave Bailey running in third. Bailey would take the lead away from Bleich on lap three as the battle for third heated up between Ken Sargent and Justin Ramsay. Rob Murray entered the top five on lap six and pressured Ramsay for fourth place. Murray then passed Sargent for third and went after the leaders. Bleich would regain the lead on lap nine, but Bailey challenged Bleich throughout the event. The lead trio of Bleich, Murray, and Bailey raced on as Ramsay reeled in the lead pack. Bailey had issues and brought out the caution with five laps remaining. On the restart, Justin Ramsay spun in turn four and collected a handful of drivers to bring out the caution with four laps remaining. The final laps saw Rob Murray pull away and would go on to score the win. Murray would be found to be illegal in post-race tech, giving the win and $1000 to second place finisher Ken Sargent.

Alex Riley and Jonathan Ayrton brought the field of Cosco Haulage Mini Stocks to the green flag with Ayrton showing the way at the end of the opening lap. Cole Taylor spun in turn four to bring out the caution with one lap completed. On the restart, Ayrton continued to show the way with Kyle Rothwell in second, but Rothwell would take the lead on lap four. Rothwell continued to pull away from the field with Leroy Buscumb in second but was pressured by Alex Riley. Rothwell pulled away from the balance of the 26 car field to score the victory, earning $1,000 for his efforts.


Dylan Llord took off into the lead on the opening circuit of the Mike Knapp Ford Pro 4 Trucks feature event. Kyle Tomaski looked underneath Llord and battled for the lead but it was Llord keeping the lead in the races’ early stages. Off a lap eight restart, Kyle Tomaski would take the lead away but Llord would regain the lead on lap 11 with Mitch Dumont running in third. Llord would pull away from Tomaski to score the win and collect the $1,000 payday while also earning his second win of the season. Llord was found to be illegal in post-race tech, giving the $1000 to second place finisher Kyle Tomaski.

Humberstone will be back in action on Sunday, July 9th as Walters Excavating presents a full card of racing plus a Racers Only “Grudge Match” Demolition Derby. Also on the card will be Time Trials for the All Canadian Championships for the Mini Stocks and Pro 4 Trucks. Pit gates will open at 4:30 pm. Grandstands at 5:00 pmwith race time scheduled for 6:30 pm. 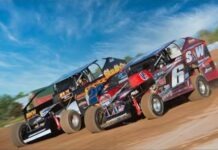