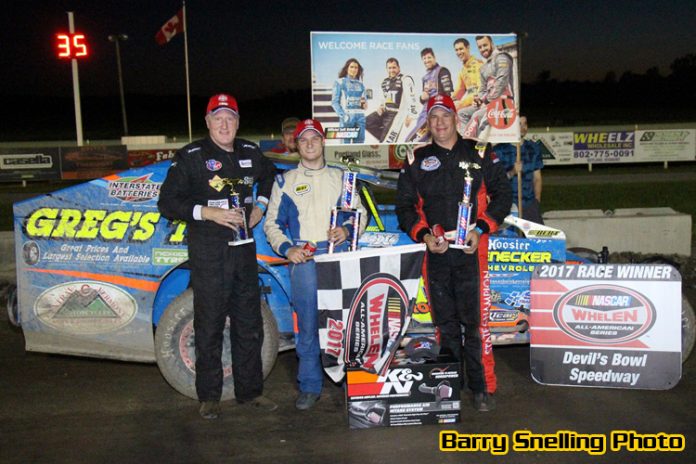 Twenty year-old Joey Scarborough from Brandon, Vt. – following in the footsteps of his father, former Devil’s Bowl champion Donald Scarborough, and cousin Norm Scarborough, a successful car owner and mechanic in the 1960s and ‘70s – beat a stellar field of 30 entries in the 35-lap Central Vermont Motorcycles Sportsman Modified feature for the win.  The youngster made quick work of things, needing only four laps to move from his fifth-place starting position into the lead.

Scarborough’s car was good in both the inside and outside lanes, but he was tested by the best late in the going as former champions Kenny Tremont Jr. and Vince Quenneville Jr. reeled him as the laps clicked away.  A green-white-checker restart with two laps to go set up a physical battle between Scarborough and Tremont, which allowed Quenneville to get past Tremont to take the runner-up position.

Tremont, who was visibly disappointed in his result, settled for third place.  Chad Miller and opening night King of Dirt Series winner Chad Edwards put on a show for fourth place, which went to Miller.  Tim LaDuc started 16th and rebounded from a mid-race crash to finish sixth with Justin Comes nailed down seventh place.  Jimmy Ryan came from the last-chance qualifier to start 23rd and finish eighth.  Brian Whittemore was ninth and rookie Walter J. Hammond finished 10th in his first dirt start at Devil’s Bowl.

Hometown driver Chris Murray of Fair Haven, Vt., was a surprise winner in the 20-lap feature for the Rosen & Berger Auto Recyclers Super Stock division.  Joey Trudeau had a dominant car for most of the race, but both Murray and Josh Bussino tracked him down from more than a straightaway behind.  Murray made his move with two laps to go and took the lead, holding on for his first win in the division.


Trudeau held Bussino off by just a few feet for the runner-up position, while Larry Bristol and Brian Rogers completed the top five.  Ronnie Alger was uninjured in a rollover on the opening lap.

Rutland, Vt.’s Chris Charbonneau earned his first-ever victory in the 15-lap feature for the Portland Glass Mini Stock division after an outstanding race.  Charbonneau – who finished second three weeks in a row prior to Monday’s event – came out on top of a four-car fight for the win by holding off Jason Porter, Robert Garney, and Chris Conroy in that order; Sean Perron was fifth.  Wayland Childs walked away uninjured from a vicious, high-flying, four-time flip down the frontstretch.

Richie Turner of Highgate, Vt., became the first driver in 2017 to win on both the 1/2-mile Asphalt Track and the 3/10-mile Dirt Track by taking his second Enduro Series race of the season.  Turner, a former Renegade champion at Devil’s Bowl, started out back but went to the lead in a hurry and was uncontested for virtually the entire 50-lap distance.  Cory Gray finished second after a good battle for position with Ethan White, who finished third.  Zach Wood was fourth, one lap behind Turner, with Craig Kirby fifth, two laps back.

Fireworks return to Devil’s Bowl Speedway on Saturday, July 8, with the rescheduled Independence Day celebration for the Asphalt Track, which was rained out last weekend.  The Mr. Rooter Pro Truck Series and the Enduro Series are both in action, along with double-points Mid-Season Championship events for the weekly NASCAR classes, presented by Brown’s Quarried Slate, Brown’s Orchard & Farm Stand, and Northstar Fireworks.  General admission is $20 for adults, $18 for seniors, $5 for teenagers, and free for kids age 12 and under.  Racing begins at a special early start time of 6:00 p.m., with fireworks at approximately 9:30 p.m.

The Dirt Track returns to action on Sunday, July 9, at 6:00 p.m. with the second half of the Pro Truck Series doubleheader, plus the “Vince Quenneville Sr. Memorial 38” for Sportsman Modifieds.  Super Stocks, Mini Stocks, and Catamount Mini Sprints will also be on the card.  General admission is $12 for adults, $10 for seniors, $5 for teenagers, and free for kids age 12 and under.