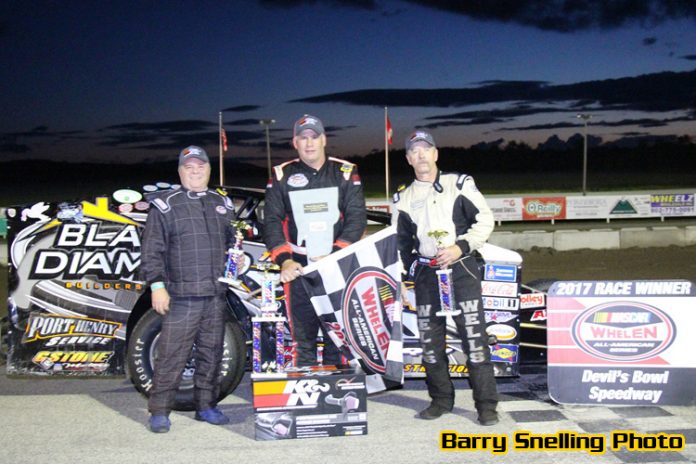 The Pro Truck Series kicked off its dual-surface doubleheader “Fast ‘N’ Dirty Weekend” event with the “Fast 55” on the 1/2-mile paved oval on Saturday night, and veteran driver Noll, of Monroe, Conn., was the cream of the crop all night long.  Noll won the pole starting position by virtue of having the fastest lap in pre-race practice, then jumped out front at the green flag and never looked back, leading all 55 laps in a well-driven, caution-free race.

Young Long Island driver Gerard Giordano Jr. kept a close distance to Noll in the first 40 circuits, but lost contact with him in lapped traffic near the end of the race.  Giordano took the runner-up position with Frankie Dumicich Jr. completing the podium.  Josh Stringer came from mid-pack at the start to finish a strong fourth, with Eric Finkbein Jr. rounding out the top five.  Frank Dumicich Sr. finished sixth, followed by Dave Koenig, Rick Ashlaw, Caleb Cashman, and Jim Thompson.

The Mr. Rooter Pro Truck Series will complete its weekend doubleheader with the “Dirty 30” on The Dirt Track at Devil’s Bowl Speedway on Sunday evening.

In weekly NASCAR Whelen All-American Series action, double championship points were on the line for the annual Mid-Season Championships.  Vince Quenneville Jr. of Brandon, Vt., copped his second win of the year in the 25-lap feature race for the O’Reilly Auto Parts Sportsman Modifieds in another green-to-checkers run.  Mike Wells battled hard with Ron Proctor for much of the distance, taking the runner-up spot in spite of some contact at the midway point.  Proctor settled for third place with Joey Roberts and Jason Durgan in tow.


Defending champion Jim McKiernan of Moriah Center, N.Y., won the 20-lap double-points race for the Rosen & Berger Auto Recyclers Super Stock division.  He as the first to break out of traffic and open up a sizeable lead; Dylan Rabtoy tracked him down near the finish but was unable to make a move and finished second.  Rookie Eric Messier finished third, followed by Scott FitzGerald and Jared Blake.  The results of the Super Stock feature are considered unofficial pending further review in post-race technical inspection.

Brendan “Roo” Forrest of West Rutland, Vt., was the unofficial winner of the 15-lap Mid-Season feature for the Portland Glass Mini Stocks, taking the first victory of his young career.  Forrest, who has had a feast-or-famine season, got out front early and won in convincing fashion.  Rookies Shawn Moquin and Cam Gadue completed the podium, with Gadue’s run being a career-best finish.  Garrett Given and rookie Mike Preston were next in line.

Cory Gray of Clarendon, Vt., won the 50-lap Enduro Series race for his first victory of the season.  Gray diced it up in the first half with the returning father-son team of Bill and Shawn Fountain before taking the lead and scooting away.  Shawn Fountain finished second with Bill Fountain third.  The full official finish is under scoring review and will be announced soon.

Devil’s Bowl Speedway is closed for its annual summer break on July 15-16, but returns to action with both the Asphalt Track and the Dirt Track on July 22-23.