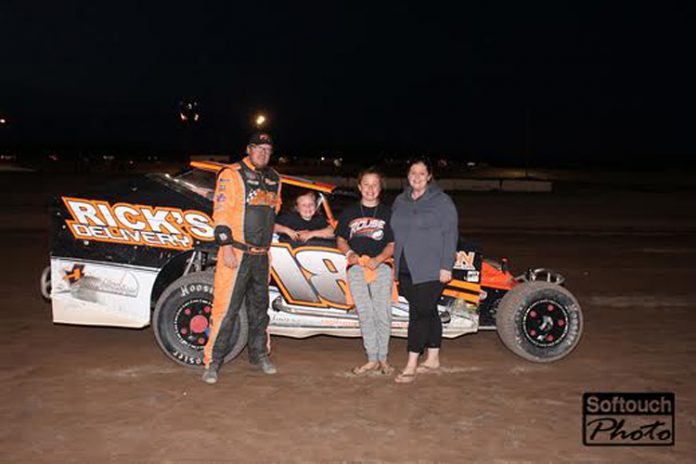 Adam Leslie and Tyler Puchalski were on the front row for the 25 lap feature for the PC Works DIRTcar Sportsman with Leslie taking the lead with Brad Rouse taking over second from Puchalski. Emily Puchalski came to a stop, in turn, four after having contact with Chad Brown, bringing out the caution with one lap completed. Adam Leslie would take the lead on the restart over Rouse as Tyler Puchalski held off Jay Mallory, Dave Flannigan, and Cody McPherson. Rouse would inch closer to Leslie and went to the outside going down the back straightaway on lap seven with Rouse gaining the lead. Tyler Puchalski would battle Adam Leslie for second with Puchalski regaining the runner-up spot on lap 11. Rouse would pull away from the field to score his third win of the season. Tyler Puchalski, Adam Leslie, Cody McPherson and Dave Flannigan Jr completed the top five.

Jeff Dayman quickly jumped out into the lead from the drop of the green flag in the 20 lap feature event for the Maple Leaf Foods Rush Late Models. Off a lap three caution, Dayman would jump back into the lead over Rob Pietz and Chad Homan. The battle was on for second between Pietz and Homan with Homan taking second place away on lap five. Ken Winfield came to a stop on the inside of turn two to bring out the caution on lap seven. Chad Homan would take the lead away from Dayman on lap eight. Rob Pietz would pass Pennacchio to take third away and would reel in Dayman for second on lap 11. The leaders would hit lap traffic with five laps remaining with Homan pulling away from the field. Ted Tremblay would go over the edge in turn three to bring out the caution with two laps remaining, bringing out the caution. Homan would pull away on the restart to score his third win of the season.

Jim Lampman and Jason Fontaine set the pace for the JC Auto Street Stocks 20 lap feature event with Lampman showing the way with a three-wide battle for second behind him with Billy Bleich Jr, Jason Fontaine, and Dave Bailey. Off a lap one caution for a John Overholt spin, Lampman would keep the lead with Fontaine regaining second. Fontaine would take the lead away on lap three and then had a three-wide battle for the lead with Dave Bailey and Ken Sargent on lap seven with Bailey taking over the lead. Billy Bleich Jr spun in turn three to bring out the caution on lap 11. On the restart, Bailey and Fontaine would battle for the lead with Bailey regaining control of the field. Bailey would pull away from Fontaine to score his second win of the season.

Sam Iftody and Fabio Oliveri led the field of Cosco Haulage Mini Stocks to the green flag for their 15 lap feature event with Oliveri showing the way over Jason Coutu and Kyle Haynes. Coutu would take the lead away from Oliveri at the end of lap three. With Coutu showing the way, Kyle Haynes would track him down and would go side by side and battle for the lead prior to the halfway mark. Brian Smith went over the edge exiting turn four and landed on his roof in the gulch. Smith was alert and climbed out of his car under his own power. Off the restart, Coutu jumped into the lead with Haynes holding off Oliveri for second. After a couple of late-race cautions, Coutu would hold off Haynes to score the win, his first of the season.
Kyle Tomaski and Craig Vlasic were on the front row for the Mike Knapp Ford Pro 4 Trucks with Tomaski showing the way. Vlasic would have a battle for second with Dylan Llord with Vlasic keeping the spot. The leaders hit lap traffic at the races’ midway point with Vlasic and Llord reeling in Tomaski. “The Rose City Rocket” Kyle Tomaski would pull away from the field to score his third win of the season. Dylan Llord would edge out Craig Vlasic for second narrowly at the line.

The racers-only demolition derby was scrapped due to only having two participants. The demolition derby that was originally scheduled for earlier in the season, has been rescheduled and added to the racing card set for Sunday, July 23rd.

NEWS AND NOTES: 73 cars signed in pitside for the racing action at the historic Humberstone oval. The entire racing program was completed at 9:25pm.Time trials were conducted for the Mini Stocks and Pro 4 Trucks for the All Canadian Championships, that saw Olivier Larocque and Craig Vlasic set fast time. Time trials set the heat lineups. If you cannot attend a time trial night and wish to race in the All Canadian, you will be added to the rear of the field in qualifying races on the All Canadian Championship night, scheduled for Sunday, August 6th.

The racing action continues at Humberstone on Sunday, July 16th as the Metro Group of Companies presents a full card of racing plus Vintage Cars, All Canadian Championship Time Trials for the RUSH Late Models and its Autograph Night! Pit gates will open at 4:30 pm. Grandstands at 5:00 pm with race time scheduled for 6:30 pm.