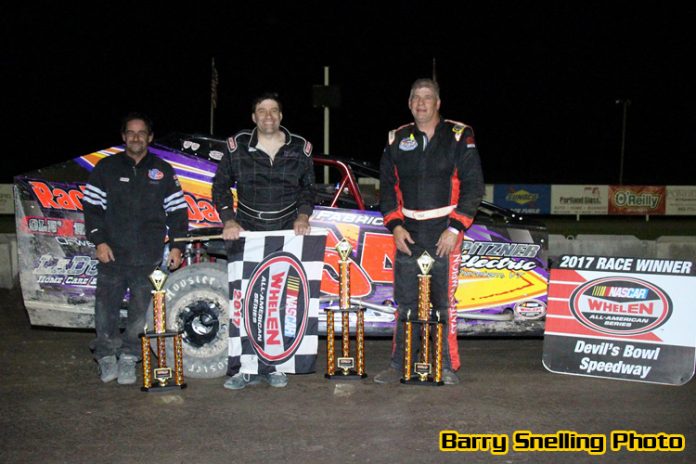 WEST HAVEN, VT – Jimmy Boyle picked the right night for his first career win with the Mr. Rooter Pro Truck Series, topping the field in an exciting event at The Dirt Track at Devil’s Bowl Speedway on Sunday, July 9.  Boyle came out ahead in the “Dirty 30” to win the first dirt race in the history of the Pro Truck group, and was one of five drivers to visit victory lane during the annual double-points Mid-Season Championship event.

Boyle, of East Windsor, Conn., started on the outside of the front row for the 30-lap Pro Truck race and watched as Andy Lindeman – a former dirt Modified driver and a heavy favorite entering the night – pull away and lead the opening eight laps.  Lindeman’s truck slowed suddenly, however, setting up an outstanding duel for the lead between Boyle and Dave Koenig.

The top spot officially changed hands four times in the next six circuits as Boyle and Koenig crossed the start/finish line, but the pair swapped the lead several times per lap in between.  Boyle took over for good one lap before the halfway mark, but Koenig held close to him until spinning out of contention with four laps to go.  Eric Finkbein Jr. and Gerard Girodano Jr. entered the battle at that moment and challenged Boyle again during the final restart with two laps left.

When the checkered flag flew, it was Boyle celebrating for the first time in the winner’s circle, with Finkbein a career-best second and Giordano third.  Long Island native Giordano had a solid two-track doubleheader weekend with the Pro Trucks at Devil’s Bowl, also finishing second on the 1/2-mile Asphalt Track on Saturday night.  Frank Dumicich Jr. and Frank Dumicich Sr. completed the top five, while the rest of the top 10 positions went to Josh Stringer, Rick Ashlaw, Saturday night winner Duane Noll, Koenig, and Jim Thompson.

Tim LaDuc of Orwell, Vt., grabbed Devil’s Bowl career win number 48 in the special 38-lap “Vince Quenneville Sr. Memorial” race for the Central Vermont Motorcycles Sportsman Modified division.  LaDuc started 12th and worked through traffic to take the lead from Tomas Kimball at lap 9; he was tested a few times on restarts, but was able to pull away each time to win his second race of the year.

Vince Quenneville Jr. finished a solid second in the race honoring his late father.  LaDuc, a long-time friend and on-track rival of Quenneville Jr., was complementary of his challenger in victory lane.

“I love winning and I almost hate to say this, but I sort of wish Vince had won this race for his dad, who was a great man,” LaDuc said.  “He had a good car, he ran me clean, and it was a lot of fun.  I finished second in the memorial race for my father [Charlie LaDuc] last year, so I know how bad it stings for him.  Maybe he can win my dad’s race in August and we’ll be even.”

Veteran driver Brian Whittemore recovered from some mid-race dramatics to post his best finish of the year in third place.  Justin Severance, who was involved in a crash that included Whittemore, took fourth place with Justin Comes fifth.  Lenny Pilsbury ran sixth, followed by Billy Lussier, James Fadden, Kimball, and Randy Howe.  Unofficially, Quenneville Jr. takes over the point lead with a seven-point edge on LaDuc (343-336).

Chris Murray of Fair Haven, Vt., posted his second win in a week when he survived a wild, wreck-filled 20-lapper for the Rosen & Berger Auto Recyclers Super Stock division.  Murray, who also won at the track on Monday night, was leading when friend and teammate Josh Bussino spun him out with just three laps left.

Asphalt regular Scott FitzGerald and Albany-Saratoga Speedway racer Damon Anderson – each in his first Devil’s Bowl Dirt Track start of the year – found themselves in the top two positions with two restarts at the end of the race.  Murray was on a mission and passed by both lapped traffic and the leaders to breeze to the win.  FitzGerald and Anderson held steady to take second and third, respectively.  Bussino was fourth officially, with Erwin Smith Jr. fifth, one lap down.  Bussino is the new unofficial point leader with Murray second (324-304).

Chris Charbonneau of Rutland, Vt., accomplished the same feat as Murray, winning Sunday’s 20-lap Portland Glass Mini Stock race as a follow-up to a win on Monday, July 3.  Charbonneau spun early in the race and had to cope with a broken gas pedal, but scored his fifth consecutive top-two finish.  Chris Conroy hung tough for the second spot, while former champion Brian Bishop Jr. returned to finish third in his first Dirt Track Mini Stock start of the year.  Robert Garney and rookie Jake Barrows were next in line.  Charbonneau widened his point lead, unofficially, with a 28-point margin on Garney (360-332).

The Catamount Mini Sprints had its fourth first-time winner in as many races, as Nadine Coates of Newport, N.H., scored her first victory.  Coates and Mark Mulready swapped the lead twice during the 15-lap race, but Coates held on for the win.  Mulready was second with Sean Beinhaur third, Robert Griffin fourth, and Austin Chaves fifth.

Devil’s Bowl Speedway is closed for its annual summer break on July 15-16, but returns to action with both the Asphalt Track and the Dirt Track on July 22-23.