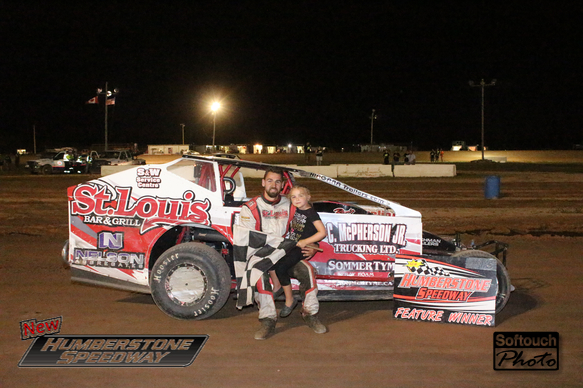 Cody McPherson was able to pick up his first win of the season in the rained out feature from July 16th for the PC Works DIRTcar Sportsman. For McPherson, it was his first triumph of the season at Humberstone. Chad Chevalier, Mark Chiddy, Adam Leslie, and Jay Mallory completed the top five. In the regularly scheduled 25 lap feature, Brad Rouse earned his fourth feature win of the season. The rest of the top five was Cody McPherson, Adam Leslie, Justin Sharp, and Chad Chevalier.

Rob Pietz was able to score his first win of the season in the rained out feature for the Maple Leaf Foods RUSH Late Models. Pietz held off Chad Homan, Sam Pennacchio, Jeff Dayman and Colton Ledingham to get the win. In the second 20 lap feature for the RUSH Late Models, it was “The Minion Mobile” with Sam Pennacchio at the controls taking home his second win of the season. Rob Pietz, Tim Gillespie, Jeff Dayman, and Chad Homan rounded out the top five finishers.

In the first 20 lap feature for the JC Auto Street Stocks, it was Caistor Centre, Ontario pilot Jim Lampman scoring the win. For Lampman, it was his first victory of the season at Humberstone. Lampman scored the win over Dave Bailey, Billy Bleich Jr, Jason Fontaine, and Kyle Pelrine completing the top five. In the nightcap, “The Fonz” Jason Fontaine used a late race pass to get around defending track champion Dave Bailey to score his first win of the season.  Kyle Pelrine, Ryan Dinning, and Billy Bleich Jr completed the top five.

NEWS AND NOTES: 70 cars signed in pitside for the racing action at the historic Humberstone oval. The entire racing program was completed just prior to 10:00 pm.

The racing action continues at Humberstone on Sunday, July 30th as the Reeb House presents a full card of racing plus the second visit of the season by the Crate Sprint Cars. Time Trials for the All Canadian Championships will also be held for the PC Works DIRTcar Sportsman. It is also another round of the Minivans of Mayhem Series. Pit gates will open at 4:30 pm. Grandstands at 5:00 pm with race time scheduled for 6:30 pm.