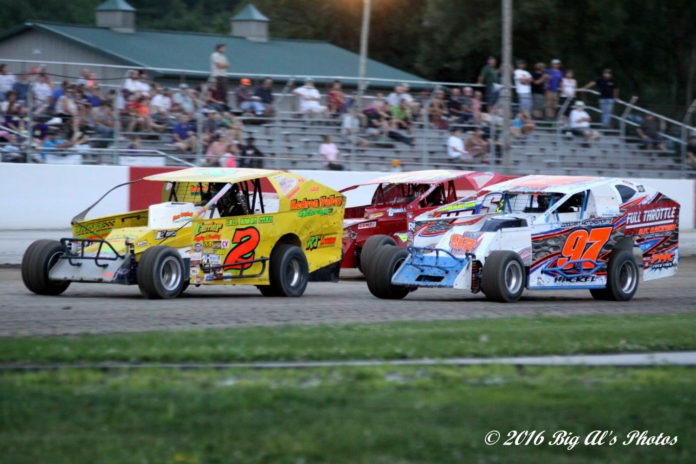 WEST HAVEN, VT – Devil’s Bowl Speedway has announced a list of changes to the remainder of the 2017 NASCAR Whelen All-American Series stock car racing schedule for its 1/2-mile Asphalt Track. Three divisions will alternate status as the weekly “headline” class for the balance of the season, in order to provide fans and race drivers with the best value for their dollar.

The changes begin this Saturday, July 29, on Community College of Vermont Night. The high-speed, four-cylinder racecars of the visiting Northeast Mini Stock Tour will be the main attraction, while the Rosen & Berger Auto Recyclers Super Stock division will take top billing among the weekly classes with an extra-distance 30-lap feature race. The Portland Glass Mini Stock and Ladies Mini Stock divisions will also be on the card, along with the popular Thomas Dairy Pit Area Tours at intermission.

The O’Reilly Auto Parts Sportsman Modified division has been removed from the July 29 program and will see the remainder of its championship schedule scaled back. The class has seen declining car counts in recent years and the 2017 season has been particularly difficult. As such, the Sportsman Modified championship schedule will wrap up with races on August 5 and September 2.

“Times are tough for the dirt-style Modifieds on asphalt, and we understand that,” Devil’s Bowl Speedway promoter Mike Bruno said. “We’re working hard to make sure that our teams still have a place to race, but we also have to protect the interests of our fans, sponsors, and the speedway as a whole. I appreciate the teams who have supported at the Asphalt Track and we’re still looking forward to crowning a champion later this year.”
The Sportsman Modifieds will return on Saturday, August 5, for the sixth annual “C.J. Richards Memorial” event with an adjusted format to be announced soon.


Positive growth has been seen in the five-race Driven Transport Late Model Series, and the Late Models will be in action with a 50-lap race on August 12, as well as the annual “3×10” special for the Mini Stocks. The Super Stocks will run a $500-to-win 50-lap race on August 19, and the Late Models will crown their champion on August 26 as part of the annual Sugar & Spice “Double Stack” Night. Plans for events in September will be announced soon.