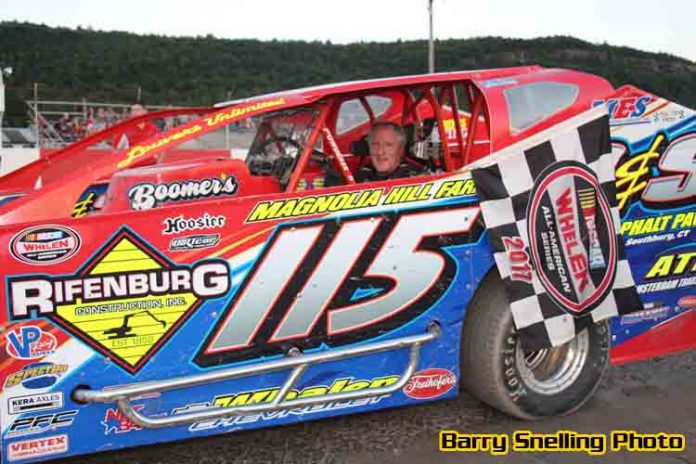 Tremont, of West Sand Lake, N.Y., started 12th in the 35-lap feature race for the Central Vermont Motorcycles division and quickly moved forward on the smooth, dry-slick track.  Hard-luck driver Jimmy Ryan took command at lap 4 after polesitter Tomas Kimball spun out, and ran the best race of his season, but was no match for Tremont and gave way at lap 22.

Tremont blistered the pack over the final 13 circuits to wrap up his second consecutive win at Devil’s Bowl and third on the season.  Ryan held on for a season-best runner-up finish, turning his campaign around in fine shape.  Tim LaDuc bounced through two crashes but drove a fast car to the front and ended the race in third place.  Justin Comes rode the outside lane to fourth place, and Randy Howe completed the top five.

Chris Murray of Fair Haven, Vt., made it a three-peat to sweep the month of July in the Rosen & Berger Auto Recyclers Super Stock division, winning the overall top prize in an exciting two-segment race.  Bill Duprey won the first 15-lap leg to earn one “segment point” in the cumulatively scored race, with Murray taking two points in second place ahead of Curtis Condon, Scott FitzGerald, and Lou Gancarz.

After a full-field invert between segments, Murray and Duprey put on a wild show coming from the back of the pack with several three-wide moves in traffic.  Duprey spun out with three laps left, but Murray soldiered on to win the segment over FitzGerald, Josh Bussino, and Matt Mosher; Duprey rebounded quickly to finish fifth.

Chris Conroy of Newport, N.H., scored his first win of the season in the 15-lap Portland Glass Mini Stock race.  Conroy took the lead from 14 year-old rookie Johnny Bruno on lap 3 and never looked back.  Bruno took a career-best runner-up finish, and fellow rookie Dakota Desabrais ran third in only his fourth appearance.  Chris Charbonneau extended his championship lead with a fourth-place effort, and Tim St. John was a season-best fifth.

Aaron Mulready of Buskirk, N.Y., wasted little time in earning his first Devil’s Bowl win, taking the 15-lap race for the Catamount Mini Sprints in just his second start at the track.  Fresh off a stint in the U.S. Marines, Mulready stole the lead from Austin Chaves with only two laps remaining.  Chaves and Colby Beinhaur – each just 15 years old – finished second and third, respectively.  Nadine Coates was fourth, and 12 year-old Cody O’Brien was scored in fifth place for his best showing.

Bill Putnam of Chester, Vt., won a fun final round in the annual Street-Legal Spectator Races, driving his 2000 Subaru Impreza to victory over a wild-driving Tim Whitney of Cornwall, Vt.; Whitney was broadsliding his 2003 Pontiac Sunfire through the corners trying to reel Putnam in, which thrilled the grandstand crowd.

Devil’s Bowl Speedway kicks off a busy month of August on Wednesday, August 2, at 7:30 p.m. with the third round of the Wednesday Night Drag Racing Series.  The 1/2-mile oval Asphalt Track is in action on Saturday, August 5, at 7:00 p.m. with the sixth annual “C.J. Richards Memorial” event, and the 3/10-mile Dirt Track cranks back up with double features in all divisions on Sunday, August 6, and 6:00 p.m.

Did Not Start: Kayla Given, Cornwall, Vt.