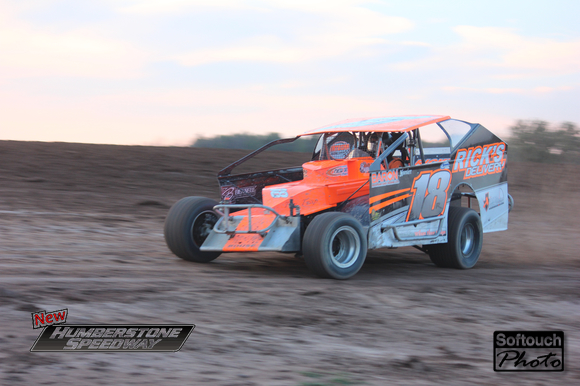 Chad Chevalier and Luke Carleton set the pace in the PC Works DIRTcar Sportsman feature with Chevalier leading Tyler Puchalski early on. Brad Rouse and Cody McPherson started to work their way into the top five by lap seven. Mark Chiddy spun, in turn, one to bring out the races first caution on lap nine. The restart would see two Port Colborne residents Chevalier and Tyler Puchalski on the front row with Chevalier pulling away as Puchalski got loose exiting turn four, losing several positions, handing second to Luke Carleton with Rouse and McPherson racing in third and fourth respectively. Rouse would take second away from Carleton on lap 13 and began to chase down race leader Chevalier. Rouse would close in on Chevalier and the two veterans would go at it for the lead. Rouse would go to the outside of Chevalier to take the lead away with five laps remaining. Rouse would go on to score his fifth win of the season.

Jeff Dayman and Chad Homan shared the front row in the feature event for the Maple Leaf Foods RUSH Late Models with Dayman taking off in the early lead over Homan, Rob Pietz, Jimmy Johnson and Sam Pennacchio racing in the top five in the races early stages. Dayman continued to lead over Homan and Pietz at the races midway point. Dayman and Homan continued to pull away from the field as Pennacchio caught Pietz for the battle for third. Homan looked underneath Dayman for the lead on lap 12 and when the leaders got back to the line, Homan would inherit the race lead. Pietz would try everything to get around Homan in the final laps but it was Homan edging out Pietz to score his fourth win of the season.

Bryce Richardson and Dave Bailey were on the front row for the JC Auto Street Stocks feature and it was Bailey taking the lead with Ken Sargent moving into second with Jason Fontaine moving into third at the end of the opening circuit. Bailey would continue to lead Sargent, Fontaine, Billy Bleich Jr and Kyle Pelrine early on. Sargent would battle Bailey for the lead with Bailey keeping the lead. Kyle Pelrine and Fontaine came together exiting turn two to bring out the races first caution on lap six. On the restart, Bailey, Bleich, and Sargent went three wide with Bleich taking over the lead as Bleich was behind the wheel of the Reese Motorsports number 11jr. Bleich, Bailey, Ryan Dinning, Sargent and Barry Beck raced in the top five during the midway point of the race. John Overholt spun in turn two to bring out the caution on lap 14. Bleich would pull away to score his first win of the season.


Jay Moulton and Mike Sarantakos brought the field of Cosco Haulage Mini Stocks to the green flag for their 15 lap feature with Moulton showing the way. Leroy Buscumb would take second away on lap one from Sarantakos with Olivier Larocque and Kyle Haynes racing inside the top four. Buscumb would take the lead on lap six with Larocque and Haynes taking positions second and third respectively at the halfway mark. Haynes would battle Larocque for second but Larocque would hold off Haynes’ advances. Buscumb would go on to score his second win of the season.

Craig Vlasic took off from his outside pole position in the feature event for the Mike Knapp Ford Pro 4 Trucks with Dylan Llord and Kyle Tomaski battled for second. Vlasic took off and led Llord and Tomaski by a half-straightaway at the races halfway mark. Vlasic would continue to pull away from the field as he hit lap traffic in the races’ closing stages. As the top three pulled away from the field, Mitch Dumont worked hard to get around Taylor Vanderzanden for fourth place. Vlasic would drive away from Llord and Tomaski to score his first win of the season.

NEWS AND NOTES:  88 cars signed in pitside for the racing action at the historic Humberstone oval. Adam Leslie set the fastest time in Time Trials for the All Canadian Championships for the Sportsman. Leslie will be on the pole for heat race number one next week.

Next Sunday is the longest running event in Southern Ontario, the All Canadian Championships. The Street Stocks will race in their first combined series race as part of the Duel on the Dirt. They will be joined by the Vintage Cars and a full Humberstone racing card. The All Canadian Championships will also feature a post race party in the camping area plus a Tribute to the Troops that will be a Must See as we are honoring the Wounded Warriors of Canada! Times are still being finalized and will be released on the track’s social media pages in the coming days. Race time is scheduled for 6:00 pm! Track management would like to thank Allen Gilletta for putting together the Vintage Cars and pre-race festivities for the All Canadian. Gilletta Flooring Services and Cosco Haulage will be giving away a brand new 602 Crate Motor to one lucky Vintage Racer! As part of the All Canadian, there will be a full military presence with World War 1 and World War 2 vehicles and equipment on display all day and the pre-race festivities with the firing of two Howitzer Cannons. The DC3 War Plane with eight parachute jumpers and members from the Niagara Military Association will also be on hand. All veterans with proper ID will be admitted for FREE next Sunday for the All Canadian.

RACE RESULTS – The Reeb House Night at the Races

Humberstone Speedway is located just two miles East of Port Colborne on Highway 3, just 17 miles west of the US/Canadian Border at the Peace Bridge (Buffalo/Fort Erie). For more information, please visit us on the World Wide Web at www.humberstonespeedway.com as well as liking us on Facebook by searching NewHumberstoneSpeedway, following us on Twitter @NewHumberstone and Instagram @HumberstoneSpeedway  Don’t forget to bring your portable FM radios and listen to all the action on 90.3FM. You can also call the speedway at (905) 834-4002 or the speedway office at Cosco Haulage (905) 935-2886