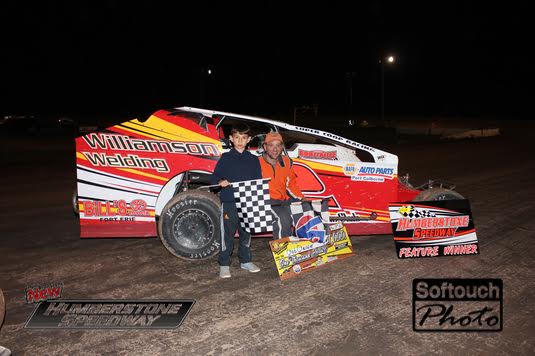 Rob Goulding and Adam Leslie were on the front row for the 50 lap feature for the PC Works DIRTcar Sportsman with Leslie showing the way. Goulding got loose exiting turn four and collected several contenders including Brad Rouse and Cody McPherson. McPherson was able to pull back onto the speedway while Rouse needed the CAA tow trucks to bring it to the pits. On the restart, Leslie would show the way with Jay Mallory, Chad Chevalier, Luke Carleton and Mark Chiddy racing inside the top five. Jordan Cosco would bring out the caution on lap five with a flat right front tire. The restart would see Leslie and Mallory continue to show the way. Chad Chevalier would take second away from Mallory on lap 12 and would start to go after race leader Adam Leslie. Brad Rouse would have front end issues and would come to a stop on the front stretch to bring out the caution on lap 17. On the restart, Chevalier would take the lead away with Matt Farnham and Justin Sharp moving into positions three and four respectively. Tyler Puchalski would spin in turn two on lap 21 to bring out the caution. On the restart, Chevalier would take off with Justin Sharp moving into the top three and would take second from Leslie on lap 22. Matt Farnham would take third from Leslie on lap 29 as Cody McPherson racing back into the top five. Chevalier would pull away from the field to score the win, his third of the season. Matt Farnham, Cody McPherson, Justin Sharp and Darrell Farraway would complete the top five.

Ken Sargent and Trevor DeBoer brought the field of JC Auto Street Stocks to the green flag for their Duel on the Dirt Combined Race with Sargent showing the way. DeBoer raced in second with Billy Bleich Jr Ryan Dinning and Jason Fontaine racing inside the top five throughout the races early stages. Sargent, Bleich, Dinning, Fontaine and Dave Bailey were in the top five on lap 10. Bleich Jr would take the lead away on lap 14 with Sargent and Bailey racing in the top three. Bailey would take the lead on lap 17. Justin Ramsay would enter the top five on lap 18. Bleich and Dinning got together in turn two on lap 19 to bring out the caution. On the restart, Bailey would pull away from the field as Sargent, Fontaine, Ramsay and Doug Anderson battled for second place during the midway point of the race. Ramsay and Sargent got together exiting turn four on lap 27 to bring out the caution. Bailey would lead off the restart with Fontaine, Doug Anderson, James Thompson and Ryan Beagle racing in the top five. Bailey would continue to show the way with 20 laps remaining. Fontaine would take the lead with 18 to go, but Bailey would regain the lead just one lap later. Once out front, Bailey would pull away from the field. Fontaine would catch Bailey with 10 to go but Bailey would hold off Fontaine. Bailey would go on to score his second straight All Canadian Championship. Jim Lampman was the overall quick time for the Street Stocks and won a contingency from Concept 1 Fabrication.

Sam Pennacchio and Rob Pietz led the field of Maple Leaf Foods RUSH Late Models with Pietz jumping into the lead over Pennacchio with Dennis Lunger Jr racing in third over Jeff Dayman and Chad Homan. Pietz would open up his lead over Pennacchio and Lunger in the first eight laps. Jay Liverance spun in turn two to bring out the caution on lap eight. On the restart, Pietz got loose and spun and collected several cars, including Dennis Lunger Jr and Colton Ledingham. The restart saw Sam Pennacchio and Chad Homan going wheel-to-wheel with Homan taking the lead on lap 12. Pennacchio would regain the lead on lap 19 but Homan would go at it again with Pennacchio for the lead. Homan would regain the lead on the last lap and would hold off Pennacchio to score his fifth win of the season, and first All Canadian Championship.

Nathan Berry led early on in the first feature for the Thunder on the Dirt Series for the Vintage Cars. Berry would lead all 15 laps to score the win Travis Braun would finish in second followed by Les Myers, Curt Sherwood and Mark Shadwell. The second feature for the Vintage Cars saw Steve Billings lead Brian Billings and Alan Byerly in the early race stages. Wayne Kendrick would move into second place on lap five. Rick St. Pierre would take the lead on the last lap to win the second feature. Steve Billings, Conrad Baker, Steve Lackey and Alan Byerly completed the top five. The third and final feature for the Vintage Cars would see Ryan Comeau lead the opening circuit. Jeff Larmet would challenge Comeau for the lead for much of the third feature with Larmet taking. Larmet, Tim Natalino, and Bill Profata completing the top three. Les Myers was the lucky winner of the new Crate Motor being given away by Gilletta Flooring and Cosco Haulage. Heat races were won by Dillon Sliter, Les Myers, Nathan Berry, and Chris Ketch.

Jonathan Ayrton and Kyle Haynes were on the front row for the Cosco Haulage Mini Stocks with Ayrton showing the way. After a couple of early race cautions, Ayrton would continue to lead as Leroy Buscumb battled with Haynes for second with Mark Bazuin challenging for the top three. Bazuin would take second from Haynes on lap eight and just one lap later, would pass Ayrton to take over the lead. Kyle Rothwell came to a stop in turn four after running inside the top ten to bring out the caution on lap 11. On the restart, Bazuin continued to show the way with Evan Curtis and Buscumb challenging for the lead. Curtis would go after Bazuin for the lead at the halfway mark, before Tom Neale spun in turn three on lap 14 to bring out the caution. On the restart, Bazuin, Curtis and Buscumb pulled away from the field. Bazuin started to open the lead up as Buscumb challenged Curtis for second place in the late stages of the race. Buscumb slowed on the back straightaway with four laps to go, bringing out the caution. The late race restart would see Bazuin drive on to score the victory.

Dylan Llord and Mitch Dumont led the field of Mike Knapp Ford Pro 4 Trucks to the green flag for their 20 lap feature event and it was Llord showing the way. Craig Vlasic and Kyle Tomaski challenged the lead duo with Vlasic taking the lead away from Llord on lap two after going three wide with Llord and Dumont. Vlasic continued to lead Llord and Tomaski at the halfway point with Taylor Vanderzanden and Terry Ronning racing in fifth. Tomaski would take second away from Llord with eight laps remaining and would reel in Vlasic. Tomaski would catch Vlasic with four laps remaining Tomaski challenged Vlasic on the final lap but it was Vlasic holding off Tomaski to score the win.

NEWS AND NOTES: 157 cars signed in pitside for the racing action at the historic Humberstone oval for one of the most prestigious nights in Southern Ontario racing, the All Canadian Championships. A special Tribute to the Troops was presented pre-race featuring a cannon salute, flyover and display of WW1 and WW2 vehicles and honored the Wounded Warriors of Canada. RedBoss Pyrotechnics provided the post-race Fireworks show.
Racing will return to Humberstone on Sunday, August 13th as Zanchin Truck and Trailer presents the Southern Ontario Sprints plus a full card of racing and another round of the Performance ATV Side-By-Side Races. Gates will swing open at 4:30pm in the pits, 5:00pm for the grandstands with race time being at 6:30pm.