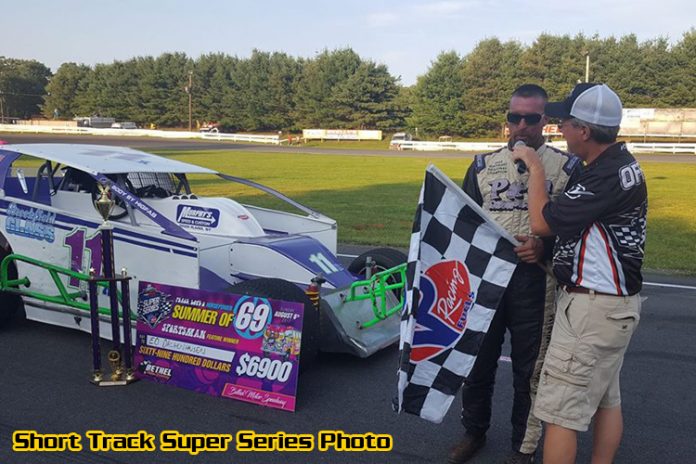 WHITE LAKE, NY – On a day that will stand out in the history of Bethel Motor Speedway, Ed Dachenhausen’s name will forever be etched the in the record books.

The 69-lap race, which pitted Open and Crate 602 Sportsman engine combinations, offered the largest Sportsman winner’s share at any venue in 2017, with the unique twist of dirt-style cars tackling the tight one-quarter-mile paved oval.

The event thrust Bethel into the spotlight with a large crowd, regional media attention and 30 competitors trying their hand at the money.

At day’s end, it was Dachenhausen’s Scott Sanford-owned car in Victory Lane.


“This is awesome,” said a thrilled Dachenhausen after climbing to the roof of his race car on the frontstretch before the energized Bethel fans. “I can’t thank everyone enough for putting this race on and giving a guy like me a chance to run for this kind of money.

“The cautions were working out in my favor. It’s always nice when you have open track to race on.”

Dachenhausen races on the dirt at Accord (N.Y.) Speedway on Friday nights in the Modified division. Bethel is his home for Saturday racing. He is a Sportsman regular while his son Tyler competes in the track’s pavement-style BMS Modified ranks.

The storybook weekend for Dachenhausen included Saturday wins by both he and his son at Bethel as a ‘Summer of 69’ prelude.

“It couldn’t have been any better of a weekend for us,” he said. “I was pretty emotional last night when my son won his first (Modified) race. This is Hollywood stuff.”

“I was lucky to win last night and not have to go through all the qualifying,” he admitted.

A field of 26 STSS Sportsman took the green on the Bethel bullring, setting up some wild moments in the race’s opening laps.

Jackie Brown Jr., from fourth, sixth-starter Dachenhausen and veteran Frank Jashembowski – up from 14th – defined themselves as victory contenders through the race’s rough-and-tumble beginning.

When Brown’s No. 6X became entangled with a lapped car in turn two during the latter part of the race’s first segment, it became a Jashembowski/Dachenhausen lead battle.

Through heavy slower traffic, Dachenhausen slipped past ‘Frankie J’ and established his No. 11x as the leader.

Race rules set two “competition cautions” on laps 25 and 50, giving teams the option to head to the pits and change tires.

For Dachenhausen, it wasn’t a consideration.

“I tried to keep the tires under me and drive straight,” he said. “We didn’t have any plans to pit.”

Dachenhausen remained the leader as the crowd intently watched Brown pick his way back through the field. Brown, a winner on dirt at Accord Speedway among other venues and frequent participant on the pavement at Devil’s Bowl Speedway in Vermont, raced back into second.

Despite a final caution on lap 66, the Hurley, N.Y., driver couldn’t unseat Dachenhausen at the front of the field.

Bethel regular Jeff Richardson of Goshen, N.Y., lost the powerplant on his No. 50 during Saturday’s program. He appeared to be on the sidelines, that is, until the main event started.

When Dom Roselli was involved in a heat-race tangle and later fought distributor issues, he failed to qualify for the main. Roselli then turned his car over to Richardson, who was eligible for a provisional start as the speedway’s point leader.

Richardson started dead last, 26th on the grid, and raced to a fourth-place finish.

Kevin Skelly of North Branch, N.Y., drove to a $1,069 payday in the 40-lap ‘Woodstocker’ Street Stock special. Skelly and Kyle Welsch distanced themselves from the field in an extra-distance event slowed by just a single caution. Skelly masterfully worked slower traffic to outdistance Welsh.

The ‘Woodstocker’ event allowed only street-legal DOT tires rather than racing tires. Skelly invaded Bethel on Saturday with DOT tires on to prepare and it paid off.

“I’m glad we came last night to get dialed in for this race on the DOT tires,” he said.

Like their full-fender Street Stock counterparts, the Four Cylinders ran with just a single caution in their 39-lap event! Mike Travis of Liberty, N.Y., took advantage of a head’s-up start to wire the ‘Hippie Bowl’ presented by Hibernation Heating and win the $669 top prize. Travis won convincingly over Shawn Maloney.

Up next for the STSS is the Recovery Sports Grill ‘Stampede at ‘toga’ on Tuesday, August 15 at Albany-Saratoga Speedway in Malta, N.Y., paying $5,000 to the Modified winner as part of the Halmar International North Region, plus a $1,000-to-win King of Dirt (KoD) Crate 602 Sportsman main.

BETHEL BEATS: The event carried a ‘Woodstock’ theme at a track located just miles from the original site of the 1969 festival. Era appropriate music, tie-dyed event shirts and more added to the event’s atmosphere….

The large crowd filled the speedway’s grandstands and spilled out to both sides with lawn chairs….

Despite the busy program of racing, the final checkered flew just after 7 p.m., well in advance of the town-imposed 8 p.m. Sunday curfew….