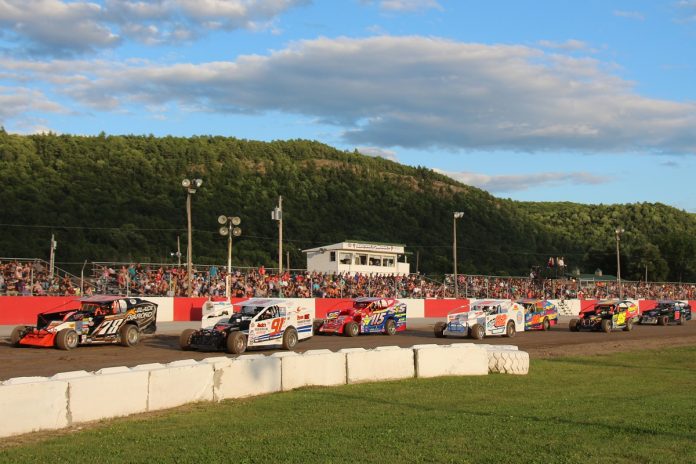 WEST HAVEN, Vt. – Devil’s Bowl Speedway is going back to its roots: Full-time dirt track racing will return in 2018. After eight years with an asphalt half-mile, with the last four years running with both asphalt and dirt layouts, the Rutland County facility will have an all-new half-mile dirt surface for its 52nd season.

The changeover marks the third period in the speedway’s history that dirt racing will be held on a half-mile surface; the track was similar in its first four seasons from 1967 to 1970 and again from 1975 through 2009. Asphalt racing has been held on the half-mile oval twice, from 1971 through 1974, and most recently from 2010 to the present. A 3/10-mile dirt track was built in the infield of the half-mile in 2014 and has operated simultaneously with the asphalt track since then.

The asphalt surface will remain intact as a solid base. A fresh new layer of natural Champlain Valley clay, which will be excavated from the speedway property in West Haven, will be laid down over the asphalt beginning in early September. About half of the width of the current infield dirt track will be also used, creating a racing surface approximately 75-80 feet wide with progressive banking in the corners. Should time and weather permit, an open test session will be held on the new surface in the fall.
In addition to the surface change, initial plans also call for an infield pit road to be constructed for use in long-distance races, and early preparation is underway to raise the height of the grandstand bleacher seating in order to provide a better viewing experience for race fans. Racing at Devil’s Bowl Speedway will continue under sanctioning from the NASCAR Whelen All-American Series for the eighth consecutive year in 2018.

Recent increases in car counts and participation in the asphalt track’s Super Stock and Mini Stock support classes have been encouraging, but the headline Sportsman Modified and Late Model divisions have ultimately proven to not be sustainable as weekly attractions.

In addition, Devil’s Bowl Speedway owners Mike and Alayne Bruno are hoping to lessen the workload for a dedicated group of staff, volunteers, and family. With asphalt racing on Saturday nights and dirt racing on Sunday nights, the current operational aspect of the facility has created a grinding seven-day work week.


“This decision is something that we have worked hard on for the last three years,” Mike Bruno said. “This is very bittersweet for me and my family. We have always loved asphalt racing and we are very proud of what we have accomplished during our six years at Devil’s Bowl. We will always be grateful for the support of our drivers and teams across all of our divisions through the good times and the bad times. Unfortunately, we feel that asphalt racing is heading in the wrong direction in this region and we have to make a change. We are excited to turn the page and start fresh with a brand new dirt track at Devil’s Bowl and build toward the future.”

Bruno made the announcement on Saturday afternoon prior to the asphalt racing event that evening and thanked the teams for their dedication since Bruno took ownership of Devil’s Bowl Speedway in November 2011. Bruno recognized several drivers by name for their support including Ron Proctor, Vince Quenneville Jr., and Robert Bryant Jr., who have competed in every event for their respective divisions since that time.

Bruno also announced changes to the end of the 2017 stock car racing schedule. Due to below-average car counts in the weekly Sportsman Modified division, the two-day “Vermont Championship Weekend” event on September 9-10 has been cancelled and officials from the American-Canadian Tour have agreed to remove that series’ doubleheader from their schedule.

Devil’s Bowl Speedway’s asphalt racing era will draw to a close on Labor Day weekend with a huge event on the afternoon of Saturday, September 2. A 100-lap Late Model race will be the main event, along with an Enduro. Sportsman Modifieds will run the annual “Leon Gonyo Memorial” event, and the Super Stocks and Mini Stocks will have extra-distance feature races. The Bandit Youth and Ladies Mini Stock classes will also be on hand.

Racing will start at 2:00 p.m. on Saturday, September 2. The final Asphalt Track Champions will be crowned in the Sportsman Modified, Super Stock, and Mini Stock divisions, and the annual pig roast barbecue party and bonfire will be held in the evening along with music and a fireworks display. General admission will be $20 for adults, $18 for seniors, $5 for teenagers (age 13-17), and free for kids age 12 and under.