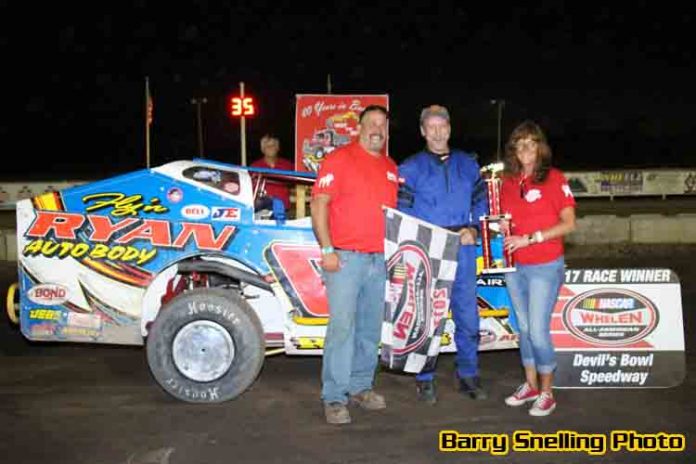 WEST HAVEN, Vt. – Luke Greenwood’s up-and-down relationship with The Dirt Track at Devil’s Bowl Speedway took a turn for the positive on Sunday, August 13, as he earned his first Sprint Cars of New England (SCoNE) victory at the track on Fabian Earthmoving Night. Four other drivers also took hold of the checkered flag during the event, with Jimmy Ryan, Chris Murray, Jesse Durkee, and Alayne Bruno all scoring wins.

Greenwood, who once flipped his winged Sprint Car over the Turn 4 wall at Devil’s Bowl, reversed a recent run of bad luck on the SCoNE tour with a convincing victory in the 30-lap main event. The Hudson, N.H., driver quickly worked his way from seventh at the start into second place in the early laps, but leader Lacey Hanson left Greenwood and the rest of the field in her wake.

Greenwood’s car came into it, though, and a yellow flag at mid-race erased Hanson’s big lead. Greenwood pounced and stole the lead away at lap 17, then opened a big lead. Behind him, Kevin Chaffee and Dan Douville came from deep in the starting order to pick cars off at a rapid pace, with Douville eventually getting past Chaffee for second place. Douville used a late restart to stalk the leader, but Greenwood held on for the win.
Douville finished second after starting 14th, and Chaffee took third place from 11th at the start. Hanson fought an ill-handling car in the final laps but was strong enough to finish fourth. Her cousin, James Hanson came from 15th to squeak out fifth place, narrowly beating Matt Hoyt. Behind Hoyt were Will Hull, Jake Williams, Clay Down, and Dennis McLeod.

Jimmy Ryan of Whiting, Vt., was perfect in both his qualifying heat race and the 35-lap main event for the Central Vermont Motorcycles Sportsman Modified division of the NASCAR Whelen All-American Series. Ryan led every lap that he was in and earned victories in both races, but the box score won’t tell the whole story.

The popular veteran driver started from the pole position in the feature race and opened up a huge lead in the first half during a long green-flag stretch, but a rash of late caution flags and restarts gave Ryan all he could handle and gave a supportive crowd some anxious moments. Kenny Tremont Jr. made his way from 10th at the start to run in second place, and squared off with Ryan no less than five times in the final 10 laps, making strong bids on both the outside and inside lanes. Rookie James Fadden, meanwhile, gave Tremont fits at the same time as he flexed his own muscle in a career-best run.


When the checkered flag flew, the crowd burst into applause for Ryan, whose victory was his first at Devil’s Bowl Speedway since a win on the Asphalt Track more than a year ago and his first on a dirt surface at Devil’s Bowl since 2005. Tremont settled for the runner-up finish but was complimentary of the winner. Fadden gained some attention from the crowd with a fine third-place effort, and Codie Aubin tied his career-best dirt finish in fourth.
Tim LaDuc overcame an 11th-place starting spot and two trips to the rear of the pack after two separate crashes to finish in fifth place. Justin Comes, Justin Severance, Trevor Rocke, Tomas Kimball, and Chris Clark completed the top 10 in order.

Unofficially, LaDuc and Tremont find themselves deadlocked in a tie atop the championship standings, at 563 points each. Vince Quenneville Jr. – who had a rough night and finished 15th – sits third 46 points back at 517, with Comes only three points behind him at 514. Justin Severance rounds out the top five at 492 points.

Hometown favorite Chris Murray of Fair Haven, Vt., continued his incredible run in the Rosen & Berger Auto Recyclers Super Stock division, winning the 20-lap feature for his fifth victory in the last six races. Murray ran a clean race but was forced to pit during a mid-race caution period due to debris from another competitor’s car dragging underneath Murray’s. Once he returned, Murray lit the field up and passed the majority of the cars on the outside lane.

Murray reached leader Scott FitzGerald late in the going and took command with five laps remaining. FitzGerald kept pace with Murray but was unable to take the top spot back and settled for second place. Curtis Condon finished third with Garrett Given and Randy Alger next in line.

With the win, Murray leapfrogged Josh Bussino to take over the championship point lead, despite skipping the season opener in May. Murray holds an unofficial lead of four points, 495-491, over Bussino. Bill Duprey sits third at 473 points.

Jesse Durkee of South Royalton, Vt., was the authoritative winner of the 15-lap Portland Glass Mini Stock feature, in his first Devil’s Bowl start of the season. A multi-time winner at Bear Ridge Speedway, Durkee came to Devil’s Bowl to take part in Round 2 of the three-race “Portland Glass Sweepstakes” series leading up to the season finale on September 17. He drove from 16th at the start to win and get locked into the open-competition finale with an “at large” provisional and a guaranteed starting position in the $750-to-win race.

Sean Perron, another Bear Ridge regular, came out on top of a good battle for second place, but was disqualified in post-race inspection for not having working rear brakes on his car, as required by the rulebooks at both Bear Ridge and Devil’s Bowl. Jason Porter, who originally finished third, inherited the position while Andrew FitzGerald, Chris Charbonneau, and Erin Aiken completed the official top five. Porter and Aiken earned the two available “home track” guaranteed starting positions for the September finale as the top two finishers ranked inside the Top 20 in Devil’s Bowl Dirt Track points who were not already locked into the event.

With two of the Mini Stock division’s top drivers not in attendance at the event, Charbonneau ripped the championship chase wide open, extending his already comfortable lead to a whopping 109 points, unofficially.

Alayne Bruno of Castleton, Vt., scored her first win on dirt and second win overall in the 10-lap Ladies Mini Stock race; Bruno got out front early and was never seriously challenged. Stephanie Roberts finished second and Megen Bradley held off Sami Sargent in the final laps for third place. Lynn Denton rounded out the field in fifth.

Devil’s Bowl Speedway is back in action on its 1/2-mile oval Asphalt Track on Saturday, August 19, at 7:00 p.m. with the annual Rutland Regional Medical Center “Hometown Heroes Night” program. The 3/10-mile Dirt Track will have the “Charlie LaDuc Memorial” event on Sunday, August 20 at 6:00 p.m.