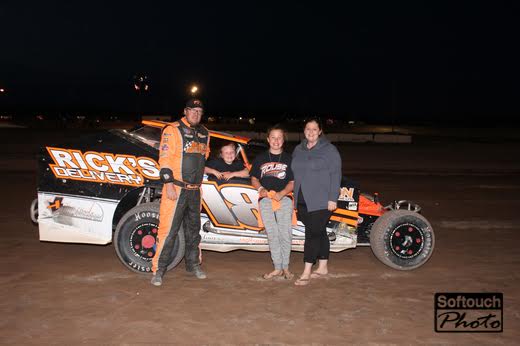 Chad Chevalier and Brad Rouse were on the front row for the main event for the PC Works DIRTcar Sportsman with Chevalier leading the way. Rouse would reel in Chevalier and would take the lead away just prior to the halfway mark. Cody McPherson would bring out the races first caution on lap 20 with a flat tire. On the restart, Rouse would be up front with Adam Leslie and Chevalier battling for second. The caution would come back out as Tom Richau Jr and Jordan Cosco got together exiting turn four, with Richau needing the CAA Tow Trucks to get back to the pits. The restart would see Rouse pull away from Chevalier to score the win.

Jeffrey May and Paul Klager brought the Mod Lites to the green flag for their main event with Klager quickly taking the lead. Steven Beckett took second away from May on lap two. Klager would go onto score the win, his second at Humberstone in 2017. Steven Beckett, Jeffrey May, Chris Watson, Randy Giroux and Tyler Winger rounded out the field.

Chad Homan used his outside starting spot to take the lead early on in the main event for the Maple Leaf Foods RUSH Late Models. Homan would quickly pull away from the field as Sam Pennacchio, Rob Pietz, Phil Potts and Stan Zanchin raced inside the top five. Phil Potts’s run would come to an end with four laps remaining as he hit the front stretch wall but would pull to the pits under his own power. Colton Ledingham and Mike Greene got together in turns three and four to bring out the caution with one lap remaining. The one-lap dash for the cash would see Homan holding off Pennacchio, Pietz, Zanchin and Ken Winfield to get the win.

Barry Beck and Ryan Dinning were on the front row for the JC Auto Street Stocks with Beck in the lead over Billy Bleich Jr and Dave Bailey. Bailey would take the lead away from Bleich on the outside of turn two on lap three. Bleich would battle with Bailey for the lead but Bailey would pull away through lap traffic. Bailey would pull away from Bleich and Dinning to score his fifth win of the season. Bleich would finish in second with Ken Sargent, Barry Beck Jr, and Derek VanMil completing the top five.


Leroy Buscumb and Rob Sauder brought the field of Cosco Haulage Mini Stocks to the green flag for their 15 lap feature event with Buscumb taking the early race lead. Kyle Haynes got loose off turn number four and collected both Evan Curtis and Jason Coutu to bring out the races first caution on lap two. Buscumb would continue to show the way off the restart as Olivier Larocque, and Brandon Iudiciani battled Sauder for second place. Buscumb would hold off Iudiciani to score the win, his third of the season.

Mitch Dumont and Kyle Tomaski shared the front row for the Mike Knapp Ford Pro 4 Trucks with Tomaski leading the opening circuits. Tomaski would pull away from the field as Craig Vlasic battled Mitch Dumont for second place at the halfway mark. Tomaski would race his way to his fourth win of the season.

Richard Hare and Max Chichuck battled for the lead in the early stages of the Cooper Motorsports Minivans of Mayhem event. Neil Martins raced in third with second generation racer Tina Ronning making her second appearance of the season raced in fourth place. Chichuck tried to look underneath Hare and would complete the pass for the lead in the late going and would go on to score the win. Hare finished second followed by Martens and Ronning.

NEWS AND NOTES: 80 cars signed in pitside. The whole racing program was completed at 9:24 pm. Lap sponsorships are available for the Sportsman and Mini Stocks for next week’s Pete Cosco Memorial event.

Next weekend is the Pete Cosco Memorial Weekend! Saturday will feature the Race of Champions Dirt Modified Series and the Race of Champions Sportsman Series plus the Mini Stocks in a non-point event. On Saturday, gates will open at 5:00 pm in the pits, 5:30 in the grandstands and race time is at 6:30 pm.

Sunday, Cosco Haulage presents the third annual Pete Cosco Memorial for Modifieds. Big Block Modifieds will be allowed to run against the Niagara Region’s best 358 Modified drivers. A full Humberstone show is also on the card with gates opening at 4:30 pm in the pits, 5:00 pm in the grandstands and race time on Sunday is at 6:30 pm.