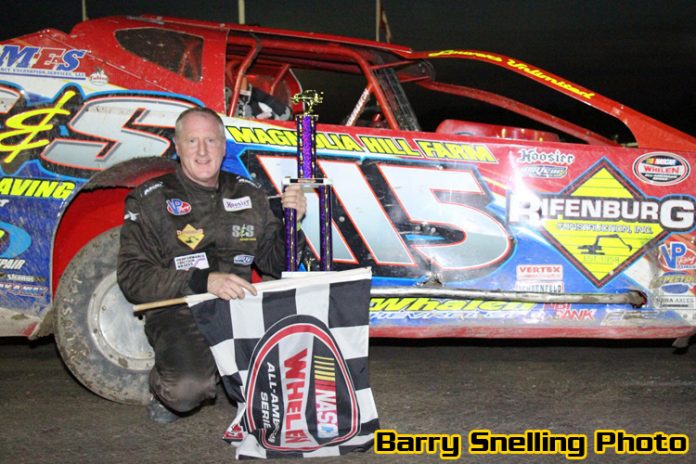 WEST HAVEN, Vt. – Kenny Tremont Jr. and Tim LaDuc are making sure that the Devil’s Bowl Speedway Dirt Track championship goes down to the wire between them, but Tremont inched ahead on Sunday, August 20. The veteran from West Sand Lake, N.Y., scored his fifth NASCAR Whelen All-American Series win of the year in a tight battle, topping a list of winners that included Bill Duprey, Andrew FitzGerald, and Aaron Mulready.

Tremont’s win in the 54-lap Charlie LaDuc Memorial – a race honoring the late father of his rival – was never a sure thing until the checkered flag flew over the Central Vermont Motorcycles Sportsman Modified field. Tremont and Tim LaDuc have been seemingly inseparable of late: They entered the night tied for the championship lead, and started and finished next to each other in both their qualifying heat and the main event.
Tremont lead the feature race for the final 45 laps, but never had more than four car-lengths of breathing room – and usually much less than that – over LaDuc, who made several serious bids to take the lead away.

“I remember Charlie LaDuc racing here at Devil’s Bowl when I was a kid, and he was always a good man, so it means a lot to win this race,” Tremont said. “I know how bad Tim wanted to win this one, and he raced me clean the whole time. It was a lot of fun.”
LaDuc was just as complimentary of Tremont: “My hat’s off to Ken – that was a heck of race,” he said. “I threw everything I had at him, but he had the right line tonight. If I can’t win this one, I’m glad Kenny did because he knew my dad and raced against him.”

Behind the lead pair, 16 year-old rookie Tanner Siemons made a big impression by finishing a strong third in only his second Devil’s Bowl start. The Orford, N.H., youngster has been learning in the Modified ranks at Legion Speedway in 2017 and made his first trip to Vermont a week ago; he held off Jimmy Ryan at the finish for the spot. Randy Howe recovered from an early spin to take fifth place, followed by Justin Severance, Justin Comes, Billy Lussier, Mike Fisher, and Chris Clark.

Tremont’s win breaks the tie with LaDuc in the championship standings, but he has only a miniscule two-point edge with two point-counting races remaining (614-612) – the difference of one position in a feature race.


Bill Duprey of Hydeville, Vt., won a well-driven 20-lap feature race for the Rosen & Berger Auto Recyclers Super Stock division, taking his fourth win of the season and the 48th of his Devil’s Bowl career. Duprey surrendered the lead to five-time winner Chris Murray with seven laps left, but snatched it back two circuits later and held Murray off in heavy lapped traffic for the victory. Garrett Given held off a race-long bid from Randy Alger for third place with Alger fourth and Mike Bradley fifth.

Unofficially, Murray holds a 13-point lead on Josh Bussino (545-532) in the point standings, with Duprey only four more points back at 528.

West Rutland, Vt.’s Andrew FitzGerald scored a long-awaited career-first win in the 15-lap feature for the Portland Glass Mini Stock division. A regular on The Asphalt Track at Devil’s Bowl Speedway, FitzGerald has been trying out the dirt in recent weeks to prepare for the 2018 season; he ran to a convincing win, holding off his younger brother Brendan “Roo” Forrest for the victory. Rookie Dakota Desabrais finished third after a wild last-lap scramble, with Johnny Bruno fourth and Chris Charbonneau fifth. With his finish, Charbonneau has mathematically clinched his first championship in the Mini Stock division.

Aaron Mulready of Buskirk, N.Y., made it three wins in his first five starts with the Catamount Mini Sprint club, taking that division’s 15-lap feature race. Point leader Austin Chaves came from eighth place at the start to make a late rally but settled for the runner-up position. Colby Beinhaur held off his father, Sean, for third place, and Robert Griffin held off his son, Josh, for fifth.

Devil’s Bowl Speedway is back in action on Wednesday, August 23 at 7:30 p.m. with the final Wednesday Night Drag Racing Series program of the season. The 1/2-mile oval Asphalt Track races on Saturday, August 26 at 7:00 p.m. with the annual Sugar & Spice “Double Stack Night” of double features in all divisions, along with the sixth annual “Great North American Pancake Eating Championship” at intermission. The 3/10-mile Dirt Track cranks back up on Sunday, August 27 at 6:00 p.m.

The Rusty Wallace Racing Experience and the Kenny Wallace Dirt Racing Experience will also be on hand during the weekend of August 26-27, offering ride-along and driving experiences on both surfaces at Devil’s Bowl. For more information or to reserve a spot, visit www.RaceWithRusty.com or www.DirtRaceWithKenny.com.