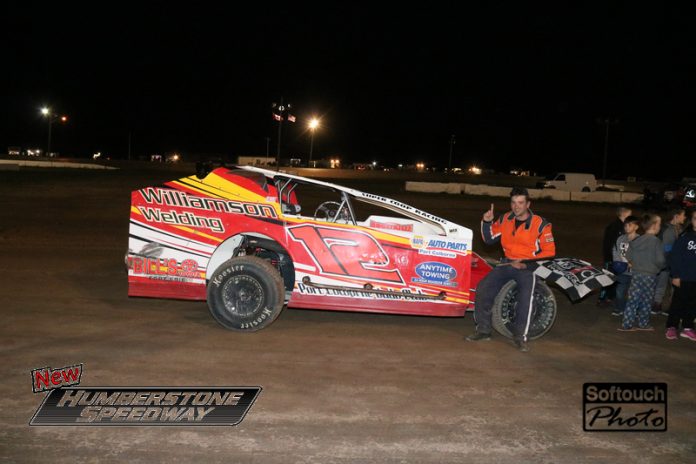 James Michael Friesen and Jay Mallory brought the PC Works DIRTcar Sportsman to the green flag for their 25-lap feature with JMF showing the way. Friesen continued to show the way off a lap seven restart as Jay Mallory was being pressured by Chad Chevalier. Chevalier would take over second place from Mallory on lap 11. Friesen and Chevalier would pull away from the rest of the field as Darrell Farraway passed Mallory to take over third with five laps remaining, and Dylan Davidson worked his way into the top five. Friesen was dominating as he would lead from flag-to-flag to score the win, his first of the season at Humberstone. With his second place finish, Chevalier would be crowned the 2017 PC Works DIRTcar Sportsman champion.

Chad Homan took off in the lead from his pole position start in the 20-lap main event for the Maple Leaf Foods RUSH Late Models. Homan would quickly take off in the lead with Colton Ledingham racing in second. Paul Grigsby went over the edge in turn three to bring out the caution on lap seven. Sam Pennacchio would take the lead from Homan on lap eight, but Homan would regain the lead on lap 11. Dave Stolzenberg Jr came to a stop in turn three to bring out the caution with five laps remaining. The late race restart would see Homan, Pennacchio and Rob Pietz working in the top three with David Pangrazio racing in fourth. Homan would hold off Pennacchio to score his seventh win of the season and clinch the track title.

Derek VanMil and Kyle Pelrine were on the front row for the JC Auto Street Stocks 20-lap feature event with Pelrine showing the way. Dave Small would battle with Pelrine for the lead. Ryan Dinning and Dave Small would battle for the lead after going three-wide with Pelrine on lap five as Dave Bailey moved up into third place on lap six. After a mid-race caution, Bailey would battle with Small for second as Ryan Dinning continued to show the way. The lead trio would battle for several laps until Bailey took the lead away on lap 11 and would hold off Dinning to score the win and clinch his second straight track championship.

Austin Werstroh and Rob Sauder brought the Cosco Haulage Mini Stocks to the green flag for their 15-lap feature event with Werstroh showing the way early on. Cole Hardy and Jason Coutu battled with Werstroh for the lead on lap four. After two cautions, Jason Coutu would take the lead with Hardy running in second place. Coutu would drive on to score the win and with his second place finish, Hardy would win the track title by just a point over Coutu.

Mitch Dumont and Danny Wurster would share the front row in the 15-lap feature for the Mike Knapp Ford Pro 4 Trucks with Dumont showing the way. Wurster, Craig Vlasic, and Dylan Llord battled for second place. While working lap traffic, Dylan Llord would inherit the lead over Mitch Dumont.  Llord would open up his lead over the balance of the field but the lead would be erased after Kyle Tomaski and Danny Wurster got together, in turn, one with just three laps remaining. The late race restart would see Llord take off in the lead over Dumont and Vlasic. Llord would go on to score the win and clinch his second straight track title.

82 cars signed in pitside. The whole racing program was completed at 9:25 pm.

The cars and stars of the Sportsman Super DIRTcar Series will be completing their three-day Niagara Region swing with the only 100-lap event on their schedule, right here at the Humberstone Speedway next Sunday night, September 10th, for the annual Trevor Wilkens Memorial Safecracker 100 presented by Mike Knapp Ford!  The Street Stocks, Mini Stocks, Pro 4 Trucks and Vintage Cars are on the racing card. Gates opening at 4:30 pm in the pits, 5:00 pm in the grandstands and race time on Sunday is at 6:30 pm.