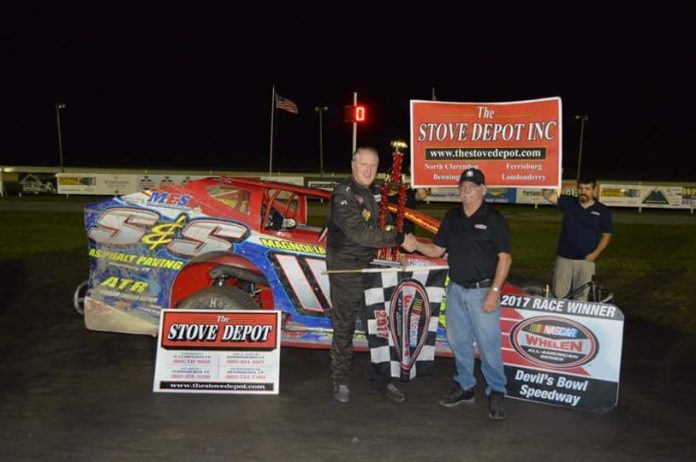 WEST HAVEN, VT – Kenny Tremont Jr. needed a good bit of luck and circumstance to help him win his eighth track championship at Devil’s Bowl Speedway, and he got both to fall his way on Labor Day.  After an early crash, the West Sand Lake, N.Y., driver dug himself out of a hole to win a wild, gloves-off finale and clinch the Central Vermont Motorcycles Sportsman Modified title over Tim LaDuc.  Four other champions were also crowned at the 3/10-mile Dirt Track at Devil’s Bowl: Lacey Hanson, Chris Murray, Chris Charbonneau, and Austin Chaves.

Tremont and LaDuc entered the final point-counting event just five points apart at the top of standings; LaDuc cut the lead to four points after qualifying heats.  Although they finished 1-2 in The Stove Depot 100 later in the evening, things were not easy for either driver.  While LaDuc ran strong early, Tremont’s iconic No. 115 car spent the majority of the main event playing catch-up.  Tremont crashed twice in the early going, forcing him to pit road during a caution period.  When he joined the field for the restart, Tremont was mired in 20th-place and stayed stuck in traffic for several laps.

Randy Howe and Jimmy Ryan both had very strong cars in the first half of the race being falling out; Howe led the first 33 laps, and Ryan paced the field for 16 circuits, each stretching out to substantial leads.  Adam Pierson – making just his second Devil’s Bowl start of the season – took the lead at the halfway mark.  With 64 laps complete, close-quarters racing and no shortage of contact among the lead pack opened the bottom lane momentarily, and the charging Tremont zoomed from sixth place into the lead in the blink of an eye, sending the crowd into hysterics.

He held the lead through the end of the race, but LaDuc – who had a major scare and nearly wrecked – came from the back of the pack on the outside lane in the last 30 laps and tried several times to drive around Tremont in the final laps including on a green-white-checker restart to end the race.  At the end, Tremont clinched the championship by six points over LaDuc (716-710), and the pair shared a congratulatory hug in victory lane; the title was Tremont’s first under the NASCAR Whelen All-American Series banner.


As much as the crowd approved of Tremont’s success, local favorite Lacey Hanson of Orwell, Vt., collected even louder cheers when she dominated the 30-lap Sprint Cars of New England feature.  Hanson started sixth but needed only one lap to get to the lead, and she left the field in her wake to take her second win of the season at her home track.  Hanson also wrapped up the three-race track championship for the Sprint Cars at Devil’s Bowl.

Clay Dow came from ninth place at the start to finish in second, and survived an early bump that sent James Hanson’s car cartwheeling spectacularly through the air and over the retaining wall; he was uninjured.  Matt Hoyt, was hooked up on the tacky surface – and performed multiple wheel-stands coming off the corners – finishing third; he was followed by Kevin Chaffee and Will Hull.  Jake Williams, Chris Donnelly, Dan Douville, Ryan Avery, and Dennis McLeod completed the top 10 finishers in order.

Matt Mosher of Queensbury, N.Y., knocked a 500-pound monkey off his back by winning the 20-lap feature race for the Rosen & Berger Auto Recyclers Super Stock division.  It was almost not meant to be for the hard-luck driver, as his car shut down while leading at lap 6 after his battery came loose.

Hometown racer Chris Murray of Fair Haven, Vt., took the lead when Mosher had his troubles, but after Mosher’s pit stop under the caution flag to get his car re-fired, he soldiered back through the pack and drove away for the win.  Murray had his own problems with a flat tire, but came from the back to finish second and sew up his first Super Stock championship; he beat Bill Duprey by 28 points (644-616) for the crown.  Curtis Condon finished third in the race, followed by Larry Bristol and Mike Bradley.

Andrew FitzGerald of West Rutland, Vt., scored his second victory in three races in the 15-lap Portland Glass Mini Stock race.  FitzGerald was involved in hard crash on the second lap, but his car suffered only cosmetic damage; he restarted last on the 17-car field and quickly got to the front, passing rookie Willie Rice for the lead at the halfway mark.  Rice led six laps and finished a career-best second.

Aaron Mulready capped the inaugural season for the Catamount Mini Sprint club by winning for the fifth time.  The Buskirk, N.Y., racer joined the club midway through the year and dominated, winning over 70% of his starts.  Fifteen year-old Austin Chaves of Chester, Vt., battled with Mulready for the win, but settled for the runner-up finish.  The rookie driver was the class of the field through the entire summer and claimed the championship.

Chaves wasn’t the only youngster up front, though, as 12 year-old Cody O’Brien claimed his first podium finish with a popular third-place run.  Josh Mulready and Brent Warren completed the top five finishers.  Nadine Coates, who led the first seven laps, walked away from a nasty flip at the midway point of the race.

Devil’s Bowl Speedway is closed on September 9-10 as preparation begins for the transformation of the half-mile oval into an all-dirt surface for 2018.  The final event of the 2017 season will be the “Carl Vladyka Memorial” on Sunday, September 17 at 5:00 p.m., as the King of Dirt Pro Stock Series will crown its champion.  Devil’s Bowl Speedway will see its first “open competition” show in many years with an anything-goes format for 602 Crate Sportsman Modifieds, Super Stocks/Street Stocks, and Four-Cylinder Mini Stocks.  The Devil’s Bowl Enduro Series will also crown its champion at the event. 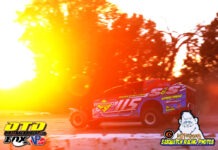