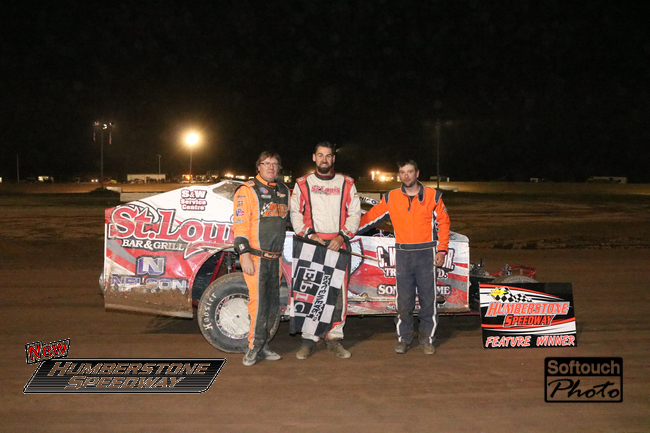 PORT COLBORNE, ONT – St. Catharines, Ontario’s Cody McPherson won the Trevor Wilkens Memorial Safecracker 100 for the Sportsman Super DIRTcar Series on Mike Knapp Ford Night at the Humberstone Speedway on Sunday evening. For McPherson, it was his second straight win on the Series and fourth in 2017 at Humberstone. Dave Bailey from Hagersville, Ontario won his eighth JC Auto Street Stock feature of the season, and sixth in a row. Kyle Haynes from Caledon, Ontario won his second Cosco Haulage Mini Stocks feature of the season. Mitch Dumont from Welland, Ontario won the main event for the Mike Knapp Ford Pro 4 Trucks. Rick St. Pierre won the main event for the Vintage Cars.

Emily Puchalski and Ron Davis III brought the field to the green flag for the Sportsman Super DIRTcar Series event for the PC Works DIRTcar Sportsman with Puchalski showing the way early on. The races first caution would come out on lap one as Brad Rouse got caught up in a jingle in turn four. Rouse was able to rejoin the field on the restart. Puchalski would still lead until defending Series winner at Humberstone Ron Davis III (RDIII) take the lead away from the rookie driver on lap nine. While coming back up through the field, Rouse would suffer a broken right front shock to bring out the races second caution on lap 13. Rouse would once again be able to join the rest of the field on the restart and would make an impact late in the race.

On the restart, Cody McPherson would make his way to the lead for the first time in the event after going to the outside to get around RDIII. McPherson would lead Davis with Jay Mallory, Emily Puchalski and Luke Carleton running in the top five for most of the first half of the race. AJ Custodi would spin to bring out a pair of cautions on lap 49 and again on lap 61. Chad Chevalier would make his way up front as he would get into the top three on lap 60 and for the next 20 laps or so, would go after RD III for second place. RD III’s strong run would come to an end with less than 20 laps remaining after he broke exiting turn two. Dylan Davidson and Adam Leslie would get together on lap 88 to bring out the caution. On the restart, Brad Rouse would move into third place and would watch a classic battle for the lead and win between McPherson and Chad Chevalier. Chevalier would take the lead with eight laps remaining, but McPherson would take the lead again for good with less than five laps remaining and McPherson would hold off Chevalier and Rouse to get the win.

Kyle Pelrine would use his front row starting spot to take the early lead in the 20-lap season finale for the JC Auto Street Stocks. Seven-time winner and recently crowned track champion Dave Bailey would take the lead away from Pelrine exiting turn four on lap two. Once he got the lead, Bailey was on cruise contol for the rest of the event. Bailey drove away from the field in dominating fashion, scoring his eighth win of the season, and sixth in a row.

Kyle Haynes jumped into the lead from his outside pole position in the main event for the Cosco Haulage Mini Stocks. Leroy Buscumb would take second away from visitor Matt Nuell off a lap five restart and would apply the pressure to Haynes. Haynes would hold off the challenges from Leroy Buscumb to score his second win of the season.


Danny Wurster and Mitch Dumont brought the field of Mike Knapp Ford Pro 4 Trucks with Dumont taking the lead. Dumont and Wurster would battle throughout the race until Wurster suffered a flat right front tire with three laps remaining. Dumont would drive on to score the win, his second of the season.

Tim Natalino led from the outset in the Vintage Car feature. Dave Charczuk would take the lead away at the halfway mark. Charczuk’s run would come to an end late in the event after breaking, giving the lead to Rick St. Pierre. St. Pierre would go on to score the win. Kevin Laws would win the qualifying event for the vintage cars.
NEWS AND NOTES: 81 cars signed in pitside. The whole racing program was completed at 9:47 pm. Brian Bellinger broke the track record set by Brad Rouse with 15.671 seconds.

The last racing event on the 2017 schedule will commence next Sunday as ATTR Metals presents the annual Eve of Destruction. An Enduro, Boat-Trailer Race, Demolition Derbies and more are on the card. The Eve of Destruction is Canada’s Wildest Motorsports Event! Also on the card will be a kid’s Power Wheels Demolition Derby! Gates opening at 9:00 am in the pits, 10:00 am in the grandstands and showtime on Sunday is at high noon.

Humberstone Speedway is located just two miles East of Port Colborne on Highway 3, just 17 miles west of the US/Canadian Border at the Peace Bridge (Buffalo/Fort Erie). For more information, please visit us on the World Wide Web at www.humberstonespeedway.com as well as liking us on Facebook by searching NewHumberstoneSpeedway, following us on Twitter @NewHumberstone and Instagram @HumberstoneSpeedway Don’t forget to bring your portable FM radios and listen to all the action on 90.3FM. You can also call the speedway at (905) 834-4002 or the speedway office at Cosco Haulage (905) 935-2886