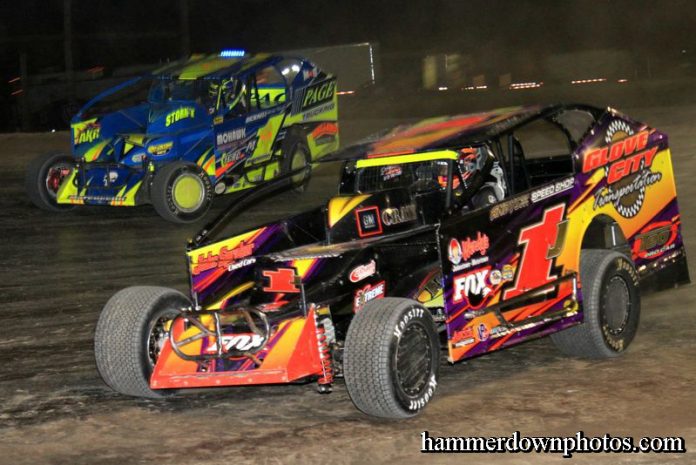 CONCORD, NC – As the most pervasive class at DIRTcar Northeast tracks, the Sportsman Modified division consists of a talented group of drivers, some of whom have already had a stellar season and are favored to win the Chevy Performance 75 on Sunday, October 8.
Rocky Warner: This guy has been dominating the Sportsman division this season. He has already collected 20 wins under the DIRTcar banner, plus other victories along the way. Warner sits atop the contender list, having finished third last year in the Chevy Performance 75.
Dave Marcuccilli: Defending race winner Marcuccilli is definitively looking for a repeat of his 2016 victory. He has six wins so far this season and will strive for more as he’s usually quite strong at the various satellite events during the week.
Brad Rouse: Former race winner at NAPA Super DIRT Week in Syracuse, Rouse has been a dominant force in Western New York and Ontario, collecting 17 wins at five different tracks. Rouse will look to be back in the winner circle at Oswego after finishing 17th last year.
Ronnie Davies III: The Fulton Speedway track champion will join the contenders in an attempt to cap off a very successful Sportsman career by adding this event to his resume. ”RDIII” added eight wins to his collection during the 2017 season, and finished in 15th last year.
Alan Fink: Another strong runner, Fink, who has had nine wins to his credit this season, will be one to watch at Oswego. Running tough competition on a weekly basis in Central New York, Fink will use his experience to get to victory lane first in this event.
Dany Gagne: Plans are not confirmed yet for NAPA Super DIRT Week, but Gagne had a dream year in the province of Quebec by securing the Sportsman track title at Autodrome Granby, Autodrome Drummond and RPM Speedway. He gathered nine wins in the process, making him an obvious favorite to take home the win at Oswego.
Alex Lajoie: Finishing with a solid top-five run last season at NAPA Super DIRT Week, Lajoie is always a contender. He had another good year up in Quebec, securing his lone win at Autodrome Granby with several top-fives in other important races.
Brianna Ladouceur: Having made history last year at Oswego by winning the Futures event on Friday evening, Ladouceur would certainly like to collect the big win this year. Regular runner at Mohawk, Cornwall and on the DIRTcar tour, the Cornwall, Ontario resident always shines in big events. Last year, she finished in 11th place.
Other notables: Being the most popular division in the Northeast, the talent pool is huge, so we’re shure to miss some names. Following are more drivers you may find in the winner circle at the end of the Chevy Performance 75: Tyler Trump, Todd Root, Kevin Root, Zach Sobotka, Taylor Caprara, Cody McPherson, Tristan Draper, Robert Delormier and Thomas Cook.
To stay up to date on the latest news and information about NAPA Auto Parts Super DIRT Week, like us on Facebook at www.facebook.com/DIRTcar or follow us on Twitter @SuperDIRTWeek or @DIRTcar_Racing For tickets and information, call 844-DIRT-TIX (844-347-8849) or go to www.SuperDIRTWeekOnline.com