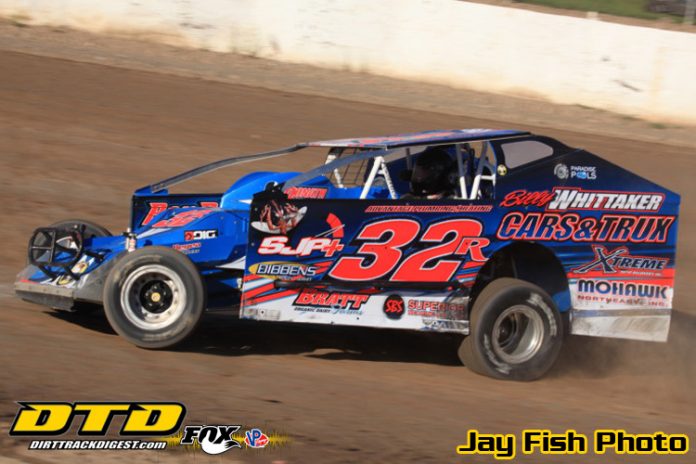 CONCORD, NC – In just one week’s time, weekly short-track race teams from all over the country will make the trek to The Dirt Track at Charlotte Motor Speedway in Concord, NC for a chance to achieve the dream of winning under the bright lights during the second annual OneDirt World Short Track Championship.

The OneDirt World Short Track Championship puts the best grassroots racers center stage at The Dirt Track at Charlotte Motor Speedway on Oct. 26-28, 2017. The event has a purse totaling in excess of $110,000, arguably one the biggest events for small race teams across the country.

Over the last couple of months, The Dirt Track at Charlotte Motor Speedway has undergone a small transformation. New clay was laid down on the 4/10th-mile to increase the banking from 13 degrees to 16 degree in the turns. Tuesday and Wednesday evening, several teams got the opportunity to test the new surface in advance of next week’s OneDirt World Short Track Championship and the Textron Off Road World of Outlaws World Finals the following week.

“The new clay seems to be holding pretty well. It’s really smooth. There really aren’t any bad spots,” said Matt Long, who will compete with the Late Models. “The [track surface] doesn’t appear to be hard on tires. I anticipate it will be similar to last year with multiple grooves.”

“Testing is a big help, and hopefully when next week comes, you can focus mainly on the track itself and know that the car is pretty close when you unload,” said Ryan Atkins of the Late Models. “It’s huge. It’s a great opportunity for us to come race at a place like Charlotte.”


The two-day spectacular will be the prelude to the highly-regarded Textron Off Road World Finals scheduled the following week at the track, but more than 300 young-guns and veterans are ready to leave their imprint on the top-tiered event. Thousands of fans alike will be in attendance to wholly witness history and back-to-back racing on one of the sport’s biggest stages.

Family, friends and fans of dirt short track racing that are not able to make it to Charlotte for the second annual OneDirt World Short Track Championship can follow the coverage multiple ways: DIRTVision.com will offer LIVE pay-per-view packages of the event in its entirety. Full nightly race recaps can be found on OneDirt.com as well as DIRTcar.com. And of course, you can always follow along on DIRTcar Racing’s Twitter and Facebook pages.

Two-day general grandstand admission (Friday and Saturday) will be $55 for adults. Children 13-and-under get in free. Single-day general admission will also be available. Tickets will only be sold at the track during the event. Camping at the Charlotte Motor Speedway campground can be reserved in advance by contacting the Speedway’s camping office at 800-455-FANS