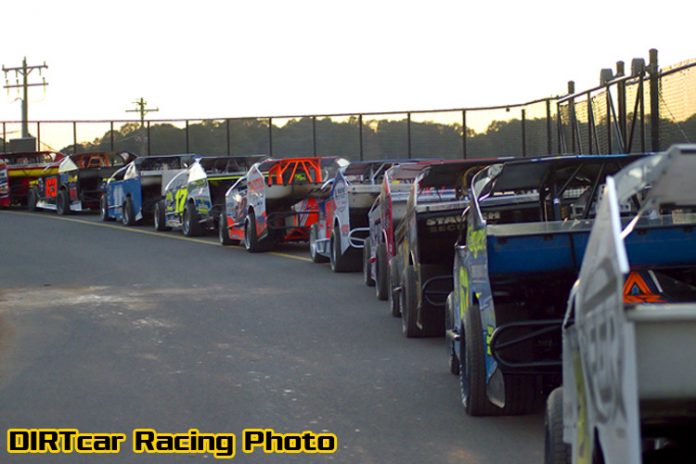 CONCORD, NC – The second annual OneDirt World Short Track Championship mega-event opened Thursday evening with 288 total entries across eight divisions taking to the 4/10th-mile semi-banked oval at The Dirt Track at Charlotte Motor Speedway for hot lap practice sessions. The OneDirt World Short Track Championship, a three-day event, puts the best short track racers in the country on center stage. A purse in excess of $110,000 across all eight divisions will be up for this weekend at Charlotte.
Each of the eight divisions ran two practice sessions during four hours on the crisp, fall, Concord, NC evening. Taking to the premier dirt racing facility were: 63 Fox Shox Pro Late Models, 44 Summit Racing Equipment DIRTcar UMP Modifieds, 45 VP Racing Fuels Sportsman Modifieds, 31 Hoosier Racing Tire Pro Modifieds, seven Chevrolet Performance Pro Sprints, 30 DRIVEN Racing Oil Pro Sportsman, 43 COMP Cams Mini Stocks, and 25 Quarter Master Hornets.
“The OneDirt World Short Track Championship is an opportunity for all eight divisions to get together and race on one of the premier dirt track facilities in the country: the Dirt Track at Charlotte Motor Speedway,” said Kenny Wallace. “It’s absolutely one of the nicest places in the country, and it’s the end of the year so it’s a lot of fun.”
Last year’s Summit Racing Equipment DIRTcar UMP Modified OneDirt World Short Track Championship winner, Kyle Strickler was quick once again during the opening night of practice at The Dirt Track at Charlotte.
“The track was pretty fast and smooth. So far, so good,” said Strickler. “It’s a beautiful facility, and it looks like the race track is going to be smooth and fast. We ended up making a switch over to Longhorn Chassis this year, and we’ve had an awesome year so far, so we would like nothing more than to pick up the win here again for all my sponsors and friends that come out to this event.”
Kyle Bronson finished third in the Fox Shox Pro Late Model during the first running of the OneDirt World Short Track Championship last year, and is looking to improve that by two positions on Saturday.
“The track is great, and my car is pretty good,” said Bronson.” I just need to make a couple of adjustments to be a little better because we’re a little tight right now. Overall the track is excellent, and I’m pretty confident headed into the rest of the weekend. We ran third last year, and I feel like as long as we keep the fenders on we have as good of a shot as anyone to win this deal.”
Plymouth (IN) Speedway regular Tyler Fitzpatrick, in the No. 57 Chevrolet Performance Pro Sprint, said, “It’s a good race and a great experience to be able to come down [to Charlotte].”
Racing action continues Friday night for night two of the OneDirt World Short Track Championship. Pit gates open at 11:00 a.m., spectator gates open at 4:00 p.m., and racing starts at 4:30 p.m. Tickets for the OneDirt World Short Track Championship are available at the ticket booths at the Dirt Track at Charlotte Motor Speedway.
If you can’t make it in person, you can watch the action live on DIRTvision.com. 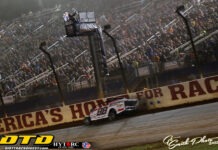 FOUR SCORE: World Finals to Showcase Every Series on Track All Four Days