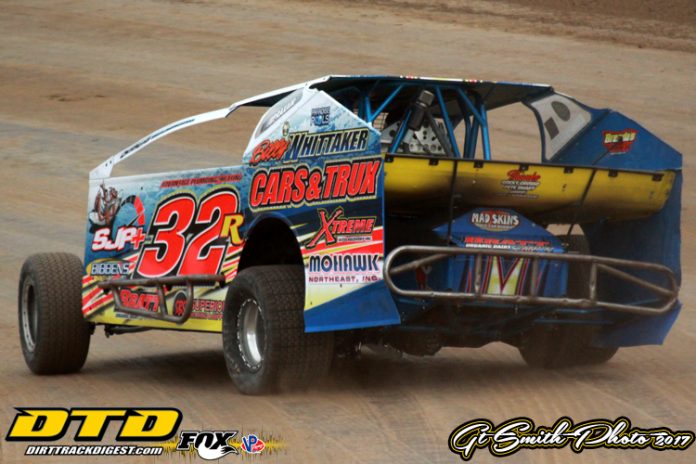 CHARLOTTE, NC – With a strong field of Sportsman Modifieds signed into the World Short Track Championship, four qualifying heats were held on Friday night ahead of the 30-lap, $4,000-to-win feature on Saturday.

After a first lap caution, pole-sitter Kevin Ridley walked away from Brandon Ford and the pack in heat one, but a rash of late calamity sent Ford to the pits and the field scrambling. After multiple attempts at a clean finish, it was Ridley, Chris Curtis, Todd Root, Kyle Inman, and Tyler Thompson transfering to the feature.

Heat two ran all eight circuits without incident, with defending winner Ronnie Davis III leading the way en route to the win. Third starter Dave Marcuccilli gave chase and closed to within a carlength on the last lap, but ultimately had nothing for Davis. Mike Stacey claimed third, with Ricky Newton and Matt Guererri also moving on to the feature.

Eric Giguere led early in heat three, but a number of early cautions kept the field in check. Robert Delormier took the lead off of a restart at halfway and Brad Rouse followed through for second after starting deep. A clean second half of the heat saw Delormier winning, Rouse second, and Giguere third. Carl Susice and Jessica Power came out with transfer spots after a wild battle that left second-starting Kevin Chafee finishing sixth.

Rocky Warner wired the field in heat four, but behind him it was a mad dash for qualifying spots. Cedric Garveau found himself in second after the dust settled with Anthony Stockman, Steve Hartman, and Matt Steffenhagen fighting behind him. Stockman, who started second, finally surrendered the fourth spot to Hartman late in the going, but all this action was well behind Warner, who took the win over Garveau, Hartman, Stockman, and Steffenhagen.