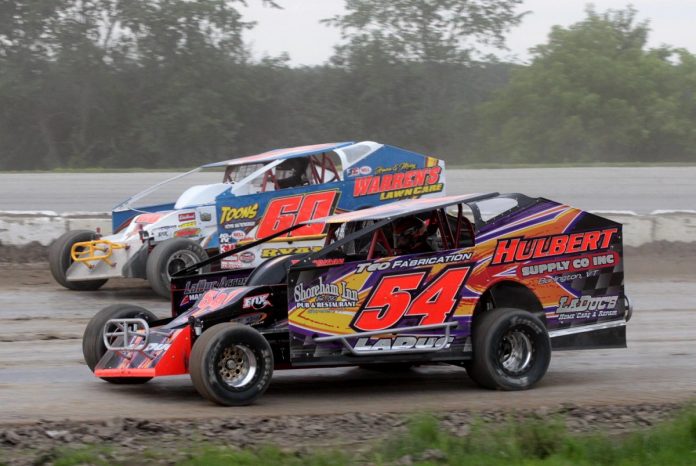 WEST HAVEN, VT – Devil’s Bowl Speedway is getting back to basics, and that includes a return to Sunday night racing in 2018. As the historic Vermont stock car racing facility undergoes the process of having its half-mile track converted from asphalt surface to natural clay, speedway management is working diligently on the format for the 52nd season next summer.

The decision to race on Sundays was reached after gathering information from more than 120 race teams and analyzing more than 1,500 responses from an online public survey of fans. Several adjustments will be made to the racing program in order to speed up the pace of the show and allow fans and competitors to arrive home at a reasonable time on Sunday night.

Among the time-saving plans are rotating schedules each week throughout the season for several divisions in which heat races are eliminated in exchange for extra-distance feature events, along with a rotation of occasional off-weeks for select classes. In addition, a new format for victory lane ceremonies is expected to cut up to 20 minutes out of each show.

“Devil’s Bowl has traditionally been a Sunday-night track, but lifestyles and priorities have changed so much that we really wanted to dig deep and see if Sunday was still manageable,” Devil’s Bowl Speedway promoter Mike Bruno said. “There was support for Saturday, but ultimately Sunday will be the best fit for the majority. However, we feel a responsibility to get everyone home at a decent hour in time for the Monday work day, and we will make a big effort to get our shows done in three hours or less.”

Bruno also said that there is a strong possibility for a handful of special events on Saturday nights or on mid-week dates. The full season schedule is expected to be announced before January 1. Rulebooks for all divisions are being finalized and are expected by December 1.
Racing in weekly divisions will continue with sanctioning from the NASCAR Whelen All-American Series, marking the eighth consecutive year under the NASCAR banner at Devil’s Bowl Speedway. Drivers will be eligible for track, state, and national championships, awards, and point fund money. Kenny Tremont Jr. won the NASCAR Vermont State Championship and the Sportsman Modified track championship on the smaller 3/10-mile Dirt Track at Devil’s Bowl in 2017 and is expected to collect more than $6,000 for his efforts.