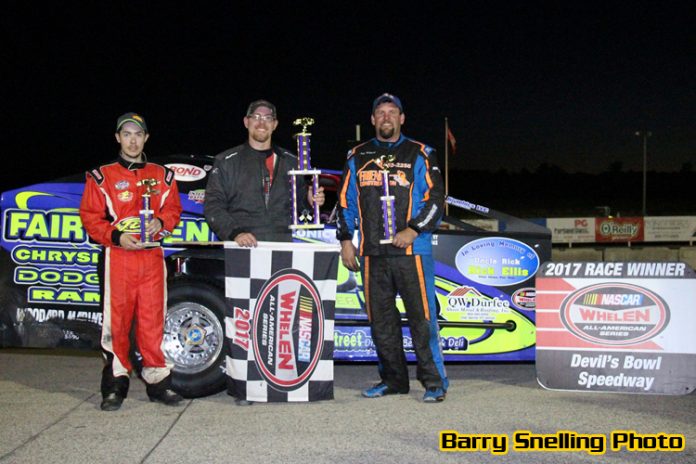 RUTLAND, VT – Devil’s Bowl Speedway has released the annual voting ballot for its annual special awards, with a total of 46 drivers nominated. The winners of the Sportsmanship and Most Improved Driver trophies, will be announced at the Banquet of Champions on Saturday, January 27 at the Holiday Inn Rutland-Killington in Rutland, Vermont.

Up to six drivers in each racing division are initially nominated by track officials, with the winners decided by a vote of drivers. The Sportsmanship Award goes each year to the driver in each class who display a consistent commitment to competitiveness, fairness, and respect. The Most Improved Driver Award is given to someone who has made noticeable progress in their on-track competitiveness.

Twenty-one of the drivers appear in multiple categories, and for the third consecutive year Sportsman Modified driver Billy Lussier of Fair Haven, Vt., has the most nominations. Lussier appears on the Sportsmanship ballot for both the 1/2-mile Asphalt Track at Devil’s Bowl and the 3/10-mile Dirt Track, as well as the Most Improved ballot for the dirt.

Additional special award recipients to be announced at the Banquet of Champions include Devil’s Bowl Speedway’s highest honors: The Award of Excellence, the Dedication Award, and the John Bruno Award, presented to someone who has made significant lifetime contributions to racing while maintaining high standards of conduct and respect on and off the track.


Tickets for the Banquet of Champions are available at $48 for adults and $28 for kids age 13 and under; drivers must purchase a ticket and be present to receive awards. To order tickets or to submit voting ballots, contact Devil’s Bowl Speedway media director Justin St. Louis at devilsbowlspeedway@gmail.com no later than Friday, January 19, 2018. The Holiday Inn Rutland-Killington is located at 476 Holiday Drive in Rutland, Vt.; contact the Holiday Inn toll-free directly at 1 (800) 462-4810 to make overnight room reservations.