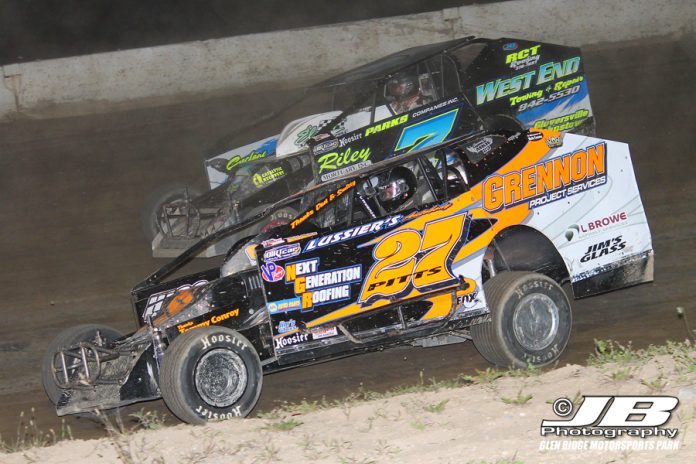 FONDA, NY – While Capital District car shows began this week at the Wilton Mall and continue through next week at Rotterdam, one thing is certain; racing fans are ready for the taste of dirt, the smell of fuel, and the sight of drivers throwing down for the crown.

The ‘Road To The Nationals’ begins Sunday April 29th at Glen Ridge Motorsports Park, where the Andy’s Speed Shop King Of Dirt Racing Sportsman Series presented by Dodson Construction will make their first ever appearance at the fastest ¼ mile on dirt.

Notably missing from the action will be 2-time King Of Dirt Sportsman champion Rocky Warner, who has moved up to Modified full time in 2018. This leaves the tour title wide open for the taking beginning with pre-season favorite Connor Cleveland in the Dean’s Electrical Services 09 Troyer.

Cleveland put up a king sized effort for the crown in 2016 battling with David Schilling down to the wire before claiming the championship. The aforementioned David Schilling in the 1-800-GOT-JUNK number 20 Bicknell will also be a front runner, as he’s been since he started chasing the KOD tour in 2015.

Chad Edwards in the Spencer Racing 37 Troyer Race Car joins Cleveland and Schilling as KOD tour winners chasing the crown in 2018. Edwards had quite possibly his best season to date last year claiming 2nd in the final point standings and a victory at Devil’s Bowl Speedway. He’s now going to open the KOD Sportsman tour at a place he’s familiar with and has visited victory lane at.


Don’t count out Mr. Personality Michael Sabia in the Redline Graphics number 7 Teo Pro Car. Sabia has multiple feature wins on the KOD tour including a pair of Mr. Crate Track USA wins at Lebanon Valley Speedway. He had his best KOD season to date last summer and finished 4th in the final point standings.

It won’t be easy for tour drivers headed to the hill however, as there resides some pretty talented Sportsman Modified drivers starting with the Parillo Services 27 of Tim Hartman Jr. and Dave Constantino in the West End Towing number 7. Both drivers have had tour experience with solid runs giving them a bit of an advantage when it comes to battling with traveling talents.

Hartman Jr. is a 2-time Northeast Crate Nationals champion, while Constantino is a master fabricator who spends his time finding new ways to make his DKM Cyclone Chassis faster. Throw in the likes of track champion Chris Curtis, local favorite Harry Shaffer II, Ricky Quick, and the always-tough Jeremy Pitts for an Ice Breaker of epic proportions at The Ridge.

There of course is sure to be the surprise visits and invaders to challenge for the right to be the first ever King Of Dirt Sportsman winner at The Ridge, which is a pre-cursor to a visit down the hill along Mohawk just 13 days later at the track of champions, Fonda Speedway.

King Of Dirt Racing Sportsman Series has a bit of history at the famed half-mile oval nestled in the Mohawk Valley. There have been three races to date and despite best efforts by all competitors in attendance, Rocky Warner was virtually unbeatable. This year will tell a different tale with the 2-time king moving on to Modified racing full time, Fonda is anyone’s race to win.

On Saturday May 12th the ‘Road To The Nationals’ goes through Fonda and much of the same tour talents will be in town to tussle with the local boys for a 30-Lap Clash Of Champions showdown.

Tour names we know such as Cleveland, Edwards, Schilling, Sabia, Watson, Duell, Pessolano, Buff, Maxon, and Chaffee just to name a few, but what about some Fonda regulars that could throw down for the crown on May 12th and possibly come away victorious?

Cody Clark in the North Hudson Woodcraft Corporation number 4 is a good starting point. Clark finished 3rd in points last season at Fonda with numerous top five finishes and a pair of wins. He also claimed the Afton Speedway track championship, which makes him a driver all will have to contend with.

Young gun and rising Fonda star Nick Scavia stunned the competition by finishing top five in final point standings last summer. Scavia was a model of consistency and found his way to victory lane as well. While he didn’t attempt to qualify last fall, he’ll be one to keep an eye on this spring.

Former track champion Mark Mortensen will surely be one to contend with. Mortensen visited victory lane last season at Fonda and kept the Jumpin’ Jacks Drive In 1M wound up through the season finishing 7th in final point standings. He’s no stranger to the tough tour competition either.