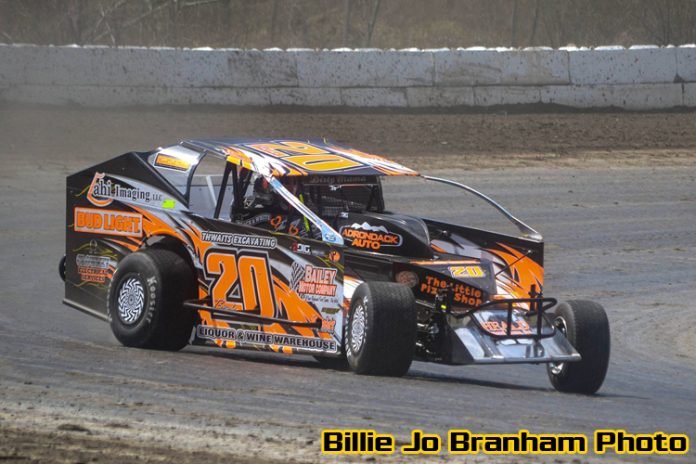 WEST HAVEN, VT – One of the most highly anticipated stock car events in the Northeast is already building its driver roster, as entry forms are already flying in for September’s historic “Vermont 200 Weekend” at Devil’s Bowl Speedway. Longtime competitor Bucko “The Professor” Branham has earned the distinction as the first driver to file an official entry for the event.

The Plattsburgh, N.Y., native will drive his familiar No. 20 AHI Imaging/Bud Light-sponsored Bicknell car in the Sportsman Modified division, as he attempts to qualify for the 30-car, 200-lap, $10,000-to-win main event. Branham owns four track championships at Airborne Park Speedway in his hometown, but he has also tasted success at Devil’s Bowl with wins on the former asphalt track in 2014 and 2015. He returned to dirt racing for the first time in over 25 years last summer and won a Sportsman feature at Airborne.

Branham admitted that he’s looking forward to the Vermont 200 so much that he filled out the entry form and mailed it to the Devil’s Bowl office within minutes of it hitting his email inbox on Thursday afternoon.

“I’m excited for that race, so I figured I might as well get the entry part done now and save the money and the time at the pit gate later,” he laughed.

One aspect of the Vermont 200 that has drivers and fans talking is that any driver will be allowed to compete, regardless of experience level. Branham said that he has heard rumors of a handful of Big Block Modified drivers who are interested in racing at the event, but he’s not intimidated at the prospect.


“The way I see it, it’s just another guy out there,” Branham said. “I’ve raced against the best on asphalt – guys like Brian Hoar and Joey Pole – and I’m not worried about the dirt guys. I figure there’ll be about 100 cars the way people are talking, so I’m going to be realistic – I’ve got to make the show first and worry about winning after.”

While Branham leads the way for the Sportsman class, multi-time winner Garrett Given of Orwell, Vt., is the first driver to file an entry in the Super Stock division. The Super Stock and Mini Stock divisions will each run a 50-lap feature during the Vermont 200 Weekend, with the winners each earning $1,000. Given reported that he has a brand new Super Stock chassis fitted with a Chevrolet Camaro body that will be ready for opening day on May 27.

Vermont 200 Weekend entry forms are available on the Devil’s Bowl Speedway website at www.DevilsBowlSpeedwayVT.com, or by emailing devilsbowlspeedway@gmail.com. Drivers who register by September 1 will save 33% on entry fees.

Devil’s Bowl Speedway is located on Route 22A in West Haven, Vt., four miles north of Exit 2 off of U.S. Route 4 and just 20 minutes from Rutland, Vt. For more information, visit call (802) 265-3112. Devil’s Bowl Speedway is on Facebook at facebook.com/DevilsBowlSpeedway and on Twitter, Instagram, and Snapchat at @DevilsBowlSpeed; follow the action using the #DevilsBowl hashtag.