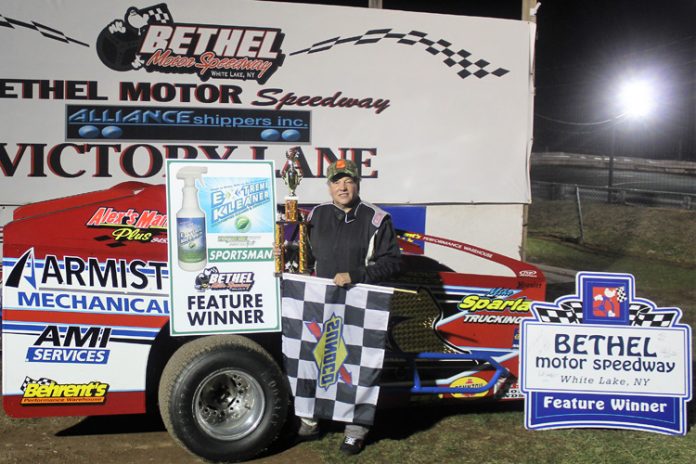 This past Saturday proved to be a chilly but even more exciting Opening Night presented by Affordable Home Improvements at Bethel Motor Speedway as they kicked off the 2018 race season.

Seasoned chauffeur Rick Mill proved he has the early season gusto despite the cooler tempartures as he wired the Extreme Kleaner Sportsman field by leading every lap of the feature. Mill had to look over his shoulder though as he had former champion Kyle Redner keeping pace and putting the pressure on during the race duration. Versatile racer Ed Dachenhausen quickly came to third position as he marched through the field in it’s early stage and caught up to the second place running Redner, but did not find the opening to capture second.

Long time campaigner, John Cote had the hot ticket on opening night as he capitalized on his pole position for the feature by leading every lap. Cote who had his hands full with Nascar Whelen Modified Series rookie Joe DeGracia running a stout second. DeGracia tried to pass Cote both on the high side and low side as Cote negotiated lap traffic but came up a car length short at the dual checkered flags. Former champion, Steve Conklin came up thru the field in the early stages and ran as high as second, but brought home a third place finish despite a late race handling issue.

Legends racing found former Bandolero champion, Mike Policastro in a new ride for the 2018 season. For the opener, it proved to be the winning combination as he led every lap despite a strong challenge from Chemung campaigner Teddy Bowen. Bowen was hot on his tail throughout the race and made several attempts to nose by on the inside but Policastro was able to shut the door each time. Policastro was able to get to the stripe first and collect his first career Legends overall win at Bethel over Bowen and hard charger Sean Verwys who came from the last to finish third by race end.


Four Cylinder Pure Stocks found a nail biting battle between Vinny Degraw and John Houghtaling. The drivers ran side by side for fifteen laps, trading the lead back and forth each lap until finally with five to go Degraw found he had the better car on this night as the strong running Houghtaling began to fade in the last few remaining laps thus handing the hard fought victory to Degraw. Cliff Levinson came across the line in third who followed closely behind the leaders for the entire race.

Mike Roth, last year’s Bandolero champion picked up where he left off last year as he picked up the opening night feature win. Roth made a pass into first on Lap 3 getting by a strong running Joey Aungst then cruised to victory over Aungst and third place finishing Evan Rygielski..

The Beginner Bandolero feature found Ty Smith leading every lap and holding off a determined Giovanni Ruggiero to pick up his first ever career win. Kaden Rogers rounded out the top three as he crossed the finish line.

Enduro guru, Mike Travis outdistanced the competition to take home his first win of the season.

Other news off the track will find Mobile-Medic as the official weekly ambulance for the 2018 race season. Also announced was the ‘Sweet Sixteen’ which is a racer participation program that sweetens the weekly purse with monetary increases when sixteen or more cars start a feature in their respective division. Street Stocks will also be seeing a weekly increase in their purse compared to previous seasons as a reward for their improved attendance this past season.

Next Saturday, April 28th finds the speedway bringing out the excitement with all classes in action plus Vintage Modifieds and a Pit Crew / Fan Uniform Contest at intermission.