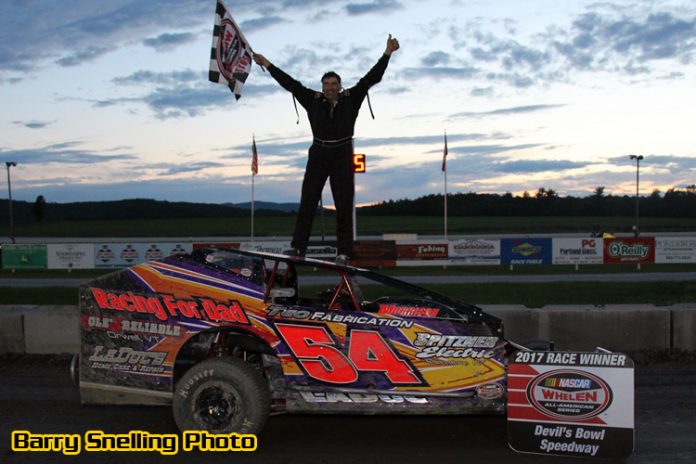 WEST HAVEN, VT – Devil’s Bowl Speedway will kick off its new era of dirt track racing in style on Sunday, May 27, with a free fan festival and car show on Opening Day. Racing fans old and new are invited to come to the speedway for the free event, which will be held from 11:00 a.m. to 1:00 p.m., prior to the night’s racing program.

After having been held in Downtown Rutland for several years, the event has been moved to Devil’s Bowl in order to ease travel burdens on race teams and parking concerns in Rutland City.

Fans will now be able to take a two-hour trip through the “locker room” during the event, with up-close-and-personal access to the Devil’s Bowl pit area as race teams prepare for their first event of the season later that day. Drivers and cars from all divisions will be on hand to meet and greet supporters of all ages, and fans are encouraged to take pictures and bring items to be autographed.


Drivers who display their cars at the fan festival will not only get preferred pit area parking before the racing event begins in the afternoon, they will also get a jump start on the season by receiving 10 bonus points in the championship standings.

Devil’s Bowl Speedway will also take part in several other local community events in the area in the coming days and weeks. Drivers, cars, and track representatives will be on hand for an open house bazaar at St. Mary’s Church in Fair Haven on Saturday, May 19 from 9:00 a.m. to 2:00 p.m., and also at the Memorial Day Parade in Fair Haven on Saturday, May 26. Racecars and drivers will also be on hand for Memorial Day celebrations in West Rutland and Vergennes on Monday, May 28.