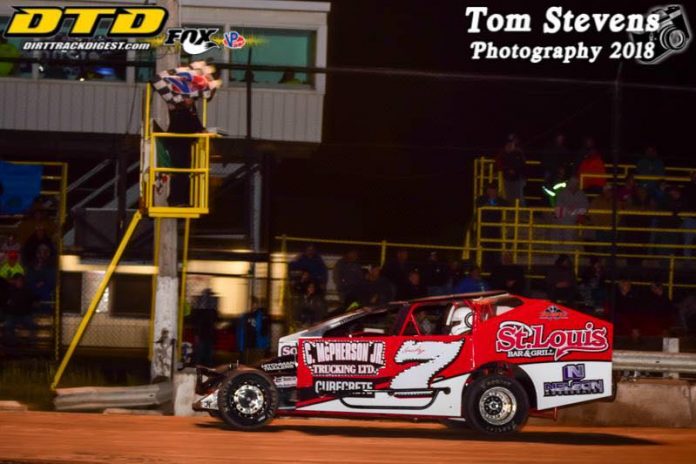 Justin Sharp took off in the lead from his pole position in the 25-lap feature go for the Harvey’s/Swiss Chalet DIRTcar Sportsman. Cody McPherson took the lead away from Sharp after a mid-race caution with James Michael Friesen, Adam Leslie and Emily Puchalski running inside the top five. Over the last ten laps, McPherson was feeling the pressure from Adam Leslie, after Leslie went by Sharp to move into second place. “I could hear Adam behind me”, McPherson said post-race. McPherson was able to hold off all the challenges that Leslie threw at him to pick up his first Humberstone checkered flag of the season.

Adam Ferri and Rob Pietz shared the front row for the Pro Fabrication RUSH Late Models feature with Ferri showing eth way. Chad Homan and Sam Pennacchio raced in third and fourth respectively early on and both would catch Pietz. Just before the halfway mark, Pietz was able to make his move as he pulled away from Homan and Pennacchio and would catch the race leader Ferri. Pietz would pass Ferri on lap 11 to take the lead. Chad Homan was able to get around Ferri to take over second place and Homan would begin to go after the leader. Pietz was able to hold off Homan to score his first checkered flag of the season.


Jason Fontaine led the early stages in the 20-lap feature for the JC Auto Thunder Stocks. Dave Bailey moved into second place on lap six and would begin to go after Fontaine. Bailey would take the lead away from Fontaine on lap 10 after going to the outside and completing the pass coming off turn four. “The outside of the track had really good bite tonight,” Bailey said in victory lane. “Last week I gave Justin Ramsay the top because I wanted to protect the bottom and Jason (Fontaine) did that tonight.” Over the last ten laps, Bailey would pull away from Fontaine to score the win, his first of the season at Humberstone, and second on the weekend.

TMR teammates Kyle Rothwell and Tyler Lafantaisie led the field of Cosco Haulage Mini Stocks to the green flag with Rothwell showing the way. Rothwell continued to show the way with Cole Hardy and Jeremy Cooper battling for second. Late in the event, while the leaders were in lap traffic, that allowed Hardy, Cooper, and Lafantaisie to reel in the leader. Rothwell would lead all 15 circuits to score the win, his first of the 2018 season.

Terry Ronning led from the pole in the 12-lap main event for the Mike Knapp Ford Pro 4 Trucks. Ronning led the opening five laps until being challenged by Mitch Dumont. Dumont would take the lead away from Ronning on lap seven. Dumont would pull away to earn his first win of the season.

Mark Shadwell led early in the main event for the Vintage Cars Jeff Larmet would take the lead away on lap three with Conrad Baker running in the second position. Jeff Larmet was able to hold off Shadwell to score the win. The qualifying heat event was won by Terry Larmet

NEWS AND NOTES: 91 race cars signed in pitside for week two of the 2018 season. The New Humberstone Speedway welcomed 150 students, teachers, and parents from the St. Joseph’s School in Port Colborne to enjoy the night at the races. St. Joseph’s was the first school to be a part of the new program started by Track President David Bitner Jr called “Buckle Up Buddies”. The school choir also performed the national anthem. The final checkered flag flew just before 10 pm.

Humberstone is back in action on Sunday, June 3 as Port Colborne Home Hardware presents the BEI Lightning Series for the Sportsman plus a full card of racing. Gates will open at 4:30 pmwith racing getting underway at 6:30 pm. Kids are encouraged to join the Humberbee’s Kids Club for their activities starting at 5:00 pm on race nights. 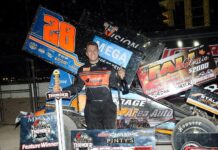