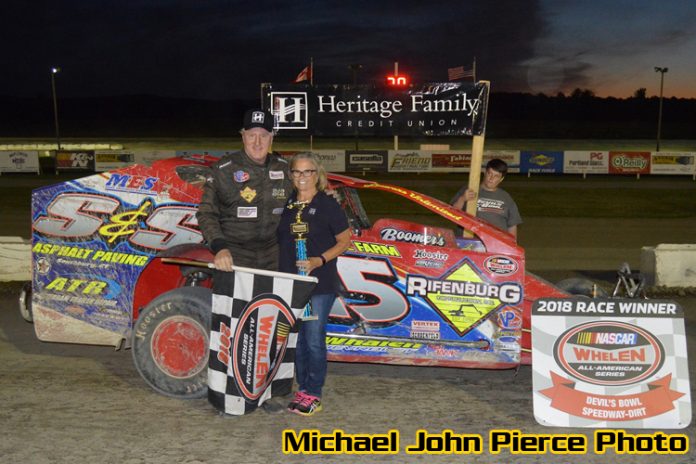 WEST HAVEN, VT – Kenny Tremont Jr. proved on Sunday night that he can handle anything that comes his way in a dirt Modified stock car. The veteran racer scored his second-straight win at Devil’s Bowl Speedway on June 10, taking the Heritage Family Credit Union “Member Night” feature after a disastrous start to his evening.

The West Sand Lake, N.Y., campaigner was off the mark through two rounds of qualifying in the NASCAR Whelen All-American Series Central Vermont Motorcycles Sportsman Modified division, finishing last in his heat race and barely making forward progress in the consolation round. As a result, he did not earn a handicapped starting position and rolled off the grid 24th in the 29-car field.

The 30-lap race went green for a long stretch, with two- and three-wide racing throughout the pack. Tremont got most of his work done on the inside lane, picking his way through traffic to reach 11th place when the caution flag flew at lap 17. He cracked the top five just three laps later as he began to search around on the top groove, and finally made his way past leader Adam Pierson on the outside after a restart with four laps left.

“I’m still not even sure how this happened,” Tremont admitted in victory lane. “We had a terrible car earlier but my guys kept working at it, and I caught the right breaks in traffic. We did not expect to win tonight.”

Before Tremont got to the front, polesitter Jimmy Ryan set a blistering pace as the leader. Heavy lapped traffic cost Ryan momentum, though, and allowed David Schilling to stuff his way through for the point just before the lap 17 caution period. Schilling and teammate Pierson put on a show following the restart, with Pierson taking over at lap 21. The final caution on lap 26 gave Tremont his opportunity.

Pierson and Schilling posted their best finishes of the season in second and third, respectively. Tim LaDuc came from 20th at the start to finish fourth, and Josh Sunn drove from 17th to fifth. Ryan turned his tough early season around with a sixth-place effort, followed by Alex Bell, Ron Proctor, Joey Scarborough, and Trevor Rocke. Heat wins went to Ryan, Scarborough, and Bell, and Marty Kelly III won the consolation round.

Travis Billington made it three wins in four races in the O’Reilly Auto Parts Limited Sportsman division, and once again the South Glens Falls, N.Y., youngster came from deep in the pack to get it done. The race was a rough one for many of the novice Modified racers, and Billington used patience and a strong car to glide through the field.

Kyle Hoard, Adam Piper, Brent Warren, and Joey Roberts all took turns leading the 25-lap race. Roberts spun out of the top spot after contact from Warren on lap 12, opening the door for Billington. Paolo Pascarella, who has been the only driver to truly keep pace with Billington in the first four events, finished second.

Former Mini Stock champion Mike Ryan was a strong third in his first Devil’s Bowl start of the year, coming from last on the 20-car field. Mike Parodi and R.J. Germain rounded out the top five ahead of Hoard, Matt Bilodeau, Jamey Ferland, Dan Lyle, and Jason Baker.

Scott FitzGerald of West Rutland, Vt., won an exciting 20-lapper for the Super Stock division, taking his first win since October 2016. Chris Murray and Curtis Condon had a good battle up front before Murray spun out of the lead with 11 laps complete.

FitzGerald took over from there on the outside lane but had no easy time of it, and also had to hold the field off in a green-white-checkered restart with two laps left. Bill Duprey, Josh Bussino, and a resurging Murray were all over FitzGerald at the finish in that order, with Condon fifth.

Jason Porter of Freeport, Maine, made it two-for-two in the Portland Glass Mini Stock division, winning the 15-lap feature race. It was his second win in as many starts on the season, and he came from 20th place at the start and bounced through an early crash to get the job done.

Brandon Emerson of Williamstown, Vt., was a first-time winner in the Friend Construction 500cc Mini Sprint division, which was cut from 15 laps to 10 laps due to time constraints. Emerson drove the Mulready Racing No. 51 car to his first Devil’s Bowl win in just his second start at the track. Cody O’Brien finished second, followed by rookie drivers Dakota Green, Shawn McPhee, and Joel Belanger.

Twelve year-old Evan Roberts of Fletcher, Vt., scored the win in the first Bandit Youth Mini Stock race of the season. Roberts, who won twice last season, led every step of the six-lap feature. Ten year-old Thomas Given finished second in his first start after an impressive outside lane pass on third-place finisher Nick Austin-Neil.

Devil’s Bowl Speedway’s next event is on Sunday, June 17, as Central Vermont Motorcycles presents the annual Father’s Day “Topless” Night. Sportsman Modifieds and Limited Sportsmen will race without roofs, and 500cc Mini Sprints will race without wings. Super Stocks and Mini Stocks will also be in action. General admission is $12 for adults, $10 for seniors, $5 for teens (13-17), and free for kids age 12 and under. Racing starts at 6:00 p.m.