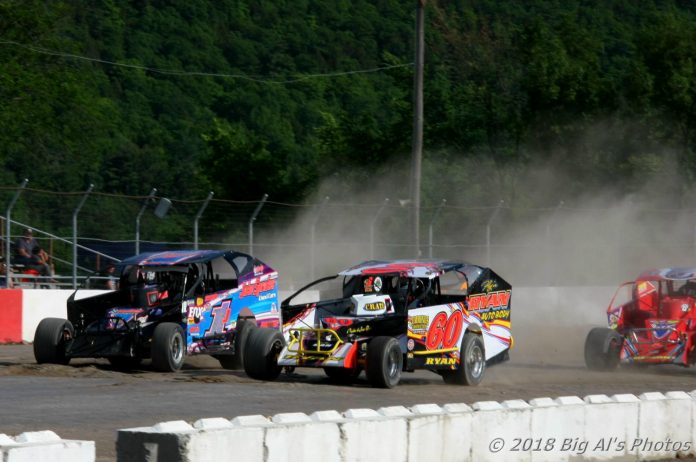 WEST HAVEN, VT – The fuse has officially been lit for the annual “Firecracker Spectacular” event at Devil’s Bowl Speedway. Rutland County’s biggest and loudest Independence Day celebration is shaping up to be the best yet, with a massive fireworks show and as many as 100 racecars expected for the Tuesday, July 3 special presented by Bruno’s Towing & Recovery.

If the early season action has been any indication, then Tuesday’s event will be a whopper. The weekly NASCAR Whelen All-American Series divisions have been nothing short of thrilling through the first month of racing on the new half-mile dirt surface, often running three-, four-, and even five-wide in the corners.

The Sprint Cars of New England (SCoNE) tour will be in town for its second appearance of the season on Tuesday night. Two-time champion Danny Douville of Bridgewater, N.H., proved why he’s called the “Topside Tornado” in the last SCoNE race in May, running from 12th to the victory with a dominant drive on the outside lane.

The Central Vermont Motorcycles Sportsman Modifieds have boasted an average of 28 entries per race so far. Eight-time champion Kenny Tremont Jr. of West Sand Lake, N.Y., has won twice, but rising star Josh Sunn of White River Junction, Vt., has quickly found a home at Devil’s Bowl and has a pair of wins as well. Tim LaDuc, David Schilling, Joey Scarborough, and Jimmy Ryan are all close behind, along with a dozen other potential winners.

Defending Super Stock champion Chris Murray of Fair Haven, Vt., is off to a good start with three wins, but still can’t shake Billy Duprey, Scott FitzGerald, or the rest of the pack. The wild Portland Glass Mini Stock division is up for grabs in 2018, and Chris Conroy of Newport, N.H., leads the early standings. The Friend Construction 500cc Mini Sprint division has seen major growth, and 13 year-old Cody O’Brien of Springfield, Vt., leads the way.

The Firecracker Spectacular wouldn’t be complete, of course, without a gigantic fireworks display, which is scheduled for approximately 9:30 p.m. The event also features the annual Kids Bicycle Giveaway at intermission, when young fans win new bikes donated by drivers and race teams.