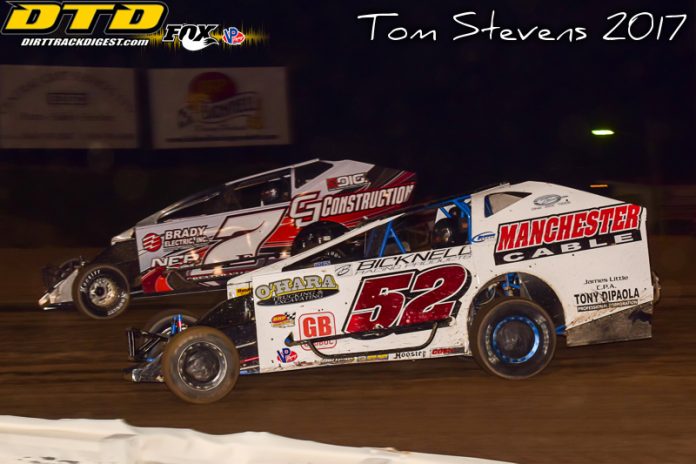 PORT COLBORNE, ONT – For the second season in a row, the New Humberstone Speedway hosted their $1,000-to-win showdown for all classes to celebrate Canada Day. Was victorious in the main event for the Race of Champions 602 Dirt Sportsman Modified Series. Charlie Sandercock from Carrying Place, Ontario took home the victory in the Northeast Late Model Alliance combined event for the Pro Fabrication RUSH Late Models. Rob Murray from St. Catharines, Ontario crossed the line first in the Insta-Panels Duel on the Dirt combined race for the JC Auto Thunder Stocks. However, Murray failed post-race inspection. Port Colborne, Ontario’s Olivier Larocque picked up the victory in the Insta-Panels Duel on the Dirt combined race for the Cosco Haulage Mini Stocks, his first feature win of the season at Humberstone. Redboss Pyrotechnics lit up the sky after the racing action with a Canada Day Fireworks spectacular.

Darrell Farraway raced away from his pole position in the 40-lap main event for the Race of Champions 602 Dirt Sportsman Modified Series. Adam Leslie would move into the second position and would go after Farraway on lap six as James Michael Friesen moved into third place. Cody McPherson would work his way through the field from his seventh starting position to take over third from Friesen on lap 12. Friesen would go three wide with McPherson and Farraway to move into second place on lap 17 and would challenge Leslie for the lead. Friesen would take the lead on lap 19. With Friesen well in command out front, McPherson would take second away from Leslie with seven laps remaining. The caution would come out for a spin by Dave DiPietro in turn four, setting up a five-lap shootout.

Chad Homan took off from his outside pole position to take the lead in the main event for the North East Late Model Alliance combined race for the Pro Fabrication RUSH Late Models. Charlie Sandercock would take the lead away from Homan on lap seven as he and Homan pulled away from Sam Pennacchio, Tim Gillespie, and Kyle Sopaz. Sopaz would take third away from Pennacchio on lap 13 and would reel in Homan and race leader Sandercock. A late race restart would bunch the field back up but Sandercock would regain the lead and would lead the final seven circuits to pick up the victory over Chad Homan.

Insta Panels Duel on the Dirt combined race for the JC Auto Thunder Stocks was brought to the green flag for their 40-lap feature by Austin Reid and Jason Fontaine with Fontaine leading lap one with Justin Ramsay running in third. Pete Reid would take over second position on lap three and would go after race leader Fontaine. Rob Murray would move into second after a lap six restart and would challenge Fontaine. Murray and Reid would battle for several laps in second place as Fontaine would start to pull away from the field. After a mid-race caution, Rob Murray was able to get to the outside and would take the lead away from Fontaine on lap 23. Once the field got some green flag laps laid down, Murray would open up the lead as Doug Anderson battled with Dave Bailey for second place. Murray would drive away to what would appear to be a $1000 payday. However, Murray failed post-race inspection. Doug Anderson, and Dave Bailey would complete the top three.

Jay Moulton and Olivier Larocque shared the front row for the Insta Panels Duel on the Dirt combined race for the Cosco Haulage Mini Stocks with Moulton showing the way. Austyn Werstroh took over second with Larocque, Tony Kelly, and Leroy Buscumb racing inside the top five early on. Kyle Wert, and Gillian Hils made contact on the front stretch to bring out the red flag on lap seven. All drivers were alright and climbed out of their cars under their own power. On the restart, Leroy Buscumb moved into the top three. Olivier Larocque would take the lead on lap 11 after Moulton went over the edge of the racetrack exiting turn two. Tony Kelly Jr took over second place on lap 15 and would set his sights on the race leader. Larocque would continue to show the way throughout the second half of the 40-lap feature.


NEWS AND NOTES: 112 cars signed in pitside for the #CanadaDayShowdown.

Next Sunday night will be a special one as it is the Bob St. Amand Sr Memorial Night. All divisions will be receiving Papa Payout bonuses. A full card of racing of Sportsman, Late Models, Thunder Stocks, Mini Stocks and Pro 4 Trucks will be presented. Gates will open at 4:30 pm with racing getting underway at 6:30 pm. Kids are encouraged to join the Humbee’s Kids Club for their activities starting at 5:00pm on race nights.