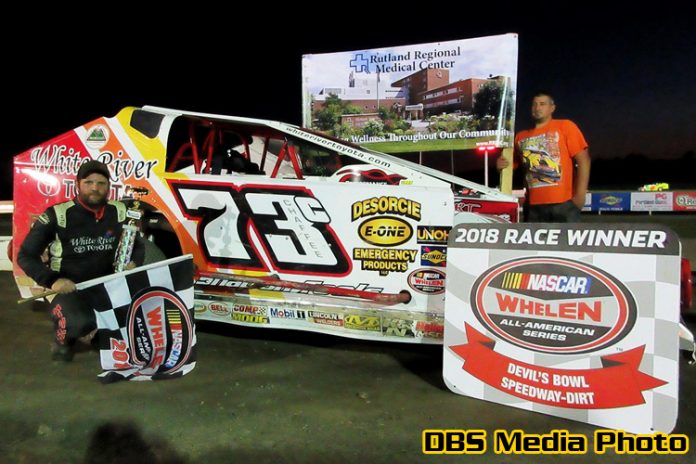 WEST HAVEN, VT – The moon might not have been full on Sunday, July 8 over Devil’s Bowl Speedway, but the drivers were in rare form. Kevin Chaffee of Bradford, Vt., stood the tallest at the end of the wild, crash-filled “Hometown Heroes” event with his first-ever Devil’s Bowl win in hand, while other drivers to make it out of the carnage and win races included Joey Roberts, Chris Murray, Jason Porter, Brandon Emerson, and Diane Porter.

Pole sitter Allan Hammond of Canaan, N.H., set the pace for the first five circuits of the 30-lap main event for the Central Vermont Motorcycles Sportsman Modified division before Mike Palmer nosed in front. Just after Palmer took control, though, all manner of chaos broke loose behind him as Joey Scarborough and rookie Tanner Siemons bumped together to trigger a massive pileup that collected half of the 26 cars in the field.

The red flag waved for about 15 minutes as the safety and wrecker crews worked feverishly to separate the 13 cars that were wadded together. While most were able to drive away, a handful including championship point leader Kenny Tremont Jr. sustained heavy damage and were forced to pit road; Tremont finished 22nd.

When racing resumed, Salisbury, Vt., veteran Palmer led the next dozen laps. Chaffee stalked Palmer for much of that distance before taking over on lap 19, and then outlasted several restarts and challenges from Palmer, Tim LaDuc, and others to earn his first win under NASCAR Whelen All-American Series sanction.


Orwell, Vt., racer LaDuc finished second and was able to leapfrog Tremont to take a 21-point lead entering next week’s double-points Mid-Season Championship event. Vince Quenneville Jr. bounced around in traffic and survived a wild ride down the frontstretch that eliminated Palmer from contention with just three laps left to finish in third place. Scarborough finished fourth and Hammond completed his best night of the season in fifth place.

Joey Roberts of Fletcher, Vt., posted his second win of the season in the 20-lap O’Reilly Auto Parts Limited Sportsman feature. Roberts and Kyle Hoard had a scorching battle for the top spot in the first half of the race before Roberts pulled away. Michael Wagner-Fitzgerald finished second in his first start since the season opener. Paolo Pascarella rebounded from a hard multi-car crash in the early laps to finish third.

Hoard was fourth with Adam Piper fifth, and point leader Travis Billington came back from a crash and two trips to pit road for sixth. Brent Warren, Mike Ryan, Tanner Forbes, and Matt Bilodeau were next in line.

Maine resident Jason Porter raised his winning percentage in the Portland Glass Mini Stocks to 80% with a score in that division’s 20-lap feature race. Porter is running a part-time schedule in 2018 and indicated – perhaps to the relief of his competitors – that Sunday’s event will be his last for several weeks due to work commitments; the win was his fourth in five starts in 2018.

Mike Preston and P.J. Cram finished second and third, respectively, Zach Wood was fourth in his first start of the year, and Kaleb Shepard took fifth despite two trips to pit road for flat tires. The Mini Stock results are unofficial pending a review of the post-race technical inspection.

Not to be outdone by her husband, Diane Porter scored a popular win in the first Ladies race of the season; the 8-lap race was her first start of any kind. Sami Sargent, driving Wood’s car, was leading on lap 4 when her steering wheel came off, sending her hard into the retaining wall; she was sore but otherwise uninjured. Porter took over at that point, holding off Jessica Moquin, Stephanie Roberts, Morgan Ballard, and Mary Gardner.

Chris Murray of Fair Haven, Vt., continued his domination of the Super Stock class, winning a three-segment scored event. Murray scored one race point for winning the first 10-lap segment, repeated that feat in the second round, and was on his to a perfect score when he got turned around in front of the field with three laps left. Still, Murray put on a show, passing on the extreme outside lane of a four-wide glob of cars in the final lap; he finished fifth in the segment for a total low score of seven points (1, 1, 5) and the overall win.

Brandon Emerson of Williamstown, Vt., topped the Friend Construction 500cc Mini Sprint division for the third time this season. Austin Chaves led the first 12 circuits but crashed when he and Emerson made incidental contact while racing for the lead; it was the third significant delay of the race, and led to a 15-minute time limit being enacted and ending the race two laps shy of its scheduled 15-lap distance. Leading rookie contender Dakota Green finished second with Colby Beinhaur third. Erick Mulready and Michael Bradley completed the top five.

Devil’s Bowl Speedway’s next event is on Sunday, July 15 with the “Vince Quenneville Sr. Memorial” Mid-Season Championships. Double points will be on the line for all weekly divisions that are in action, and there will be a special appearance by the ground-pounding Small Block “358” Modifieds with twin 20-lap feature races. Special event general admission is $15 for adults, $13 for seniors, $5 for teens (13-17), and free for kids age 12 and under. Racing starts at 6:00 p.m.