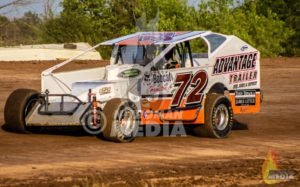 James Michael Friesen and Jay Mallory led the field down to the green flag for the 30-lap feature for the Harvey’s/Swiss Chalet DIRTcar Sportsman with Friesen jumping into the lead. Jordan Cosco would move into second and would challenge Friesen for the lead for several circuits. Cody McPherson and Chad Chevalier moved up through the field. After a lap 12 restart, Chad Chevalier would battle with Friesen for the lead. Chevalier would go to the outside to pass Friesen on lap 14. With Chevalier showing the way, Friesen and McPherson would battle for second place, with Friesen holding McPherson off. Brad Rouse would make it a three-car battle in the closing stages as that trio would reel in Chevalier. Friesen would regain the lead back from Chevalier with three laps remaining and would go on to score the win, his second straight feature win at New Humberstone. Friesen offered in victory lane that “it is special to win tonight. I grew up knowing the St. Amand family and it is an honor to win on the night to honor Bob Sr”. The finish of the race is unofficial pending a technical review.

The Sportsman also ran the completion of the 25-lap feature from June 10th with Jay Mallory and Brad Rouse battling for the lead with Rouse taking the lead. After a lap nine restart, Greg Panunte would take the lead away after Mallory and Rouse got together, in turn, one, with both losing several positions on the speedway. Cody McPherson would move into the top two and would go after race leader Panunte. McPherson would then pass Panunte with five laps remaining and would go on to score the victory.

Rob Pietz and Sam Pennacchio led the Pro Fabrication RUSH Late Models to the green flag for their 20-lap main event with Pietz showing the way early. Chad Homan moved into the top three and would go after second place, Sam Pennacchio. Homan would take second just before the halfway mark as Pietz would open-up the lead. The races first caution would come out on lap 13 as Adam Ferri slowed after hitting the front stretch wall. Homan would take the lead off the restart and would go to score his third win of the season.

The JC Auto Thunder Stocks was brought to the green flag for their 20-lap feature by Jason Fontaine and Dave Bailey with Fontaine showing the way early. Fontaine and Bailey would battle throughout the event, including splitting lap cars and still battling for the lead, having the crowd on the edges of their seats throughout the race. After battling for much of the event, Bailey would clear Fontaine late and would go on to score the win.


Jay Moulton led from the pole in the 15-lap feature for the Cosco Haulage Mini Stocks. Olivier Larocque took second away off an early race restart and would start out to pull away from the field. Larocque would hold off challenges from several competitors including Leroy Buscumb, Jay Moulton, and Cole Hardy. Larocque would go on to score his second straight feature win.

Adam Nicholls led the opening circuits in the main event for the Mike Knapp Ford Pro 4 Trucks. Danny Wurster, Dylan Llord, and Mitch Dumont battled for the lead Dumont took the lead on with two laps to go. Dumont would go on to score the win, his second in a row, and third of the season.

NEWS AND NOTES: Huge thanks to the St. Amand family along with all the lap sponsors and contingency sponsors that helped put on the event. Also, a huge thank you to all the sponsors of the bike giveaways that took place throughout the night.

Next Sunday night, July 15, the Metro Group of Companies presents the fan favorite Autograph Night and Super Hero Night! A full card of racing of Sportsman, Late Models, Thunder Stocks, Mini Stocks and Pro 4 Trucks will be presented. Gates will open at 4:30 pm with racing getting underway at 6:30 pm. Kids are encouraged to join the Humbee’s Kids Club for their activities starting at 5:00 pm on race nights.