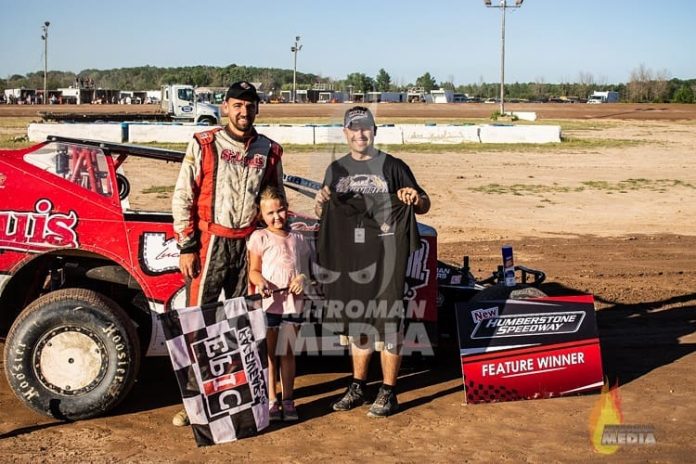 Cody McPherson and Emily Puchalski led the field down to the green flag for the 25-lap feature for the Harvey’s/Swiss Chalet DIRTcar Sportsman with McPherson showing the way. McPherson would pull away from the field as the battle was on behind him. Darrell Farraway and Jay Mallory would battle throughout the main event. Jordan Cosco and James Michael Friesen would battle for fourth throughout the event as well. McPherson would go on to score his third victory of the season. Jay Mallory would out-race Darrell Farraway to finish in second with Jordan Cosco and James Michael Friesen completing the top five.

Ken Winfield and Sam Pennacchio were on the front row for the 20-lap main event for the Pro Fabrication RUSH Late Models with Pennacchio quickly taking the lead with Rob Pietz in second and Chad Homan racing in third. The top three would pull away from fourth place runner David Pangrazio. Jay Liverance spun, in turn, two right in front of leader Sam Pennacchio with Pennacchio hitting Liverance to bring the caution out on lap 13, giving the lead to Rob Pietz. Off the restart, Pietz and Chad Homan would battle for the lead as Pangrazio looked on from third. Homan would take the lead on lap 16 after an inside move exiting turn two. Homan would pull away to his fourth win of the season.

The JC Auto Thunder Stocks was brought to the green flag for their 20-lap feature by Jesse McDonald and Barry Beck Jr, with “The Bearcat” leading the opening circuits. The first caution would come out on lap three as Tanner Podwinski spun in turn two, with Lorraine Overholt also being involved. The spin took place with Pete Reid and Dave Bailey making slight contact with the spinners, but both were able to continue. The restart would see Jesse McDonald taking over the lead as Pete Reid raced from second place. Joe Bleich would spin on lap seven to bring out the races second caution. Beck would regain the lead on lap nine as a three-car battle for third shaped up between Jim Lampman, Dave Bailey, and Jason Fontaine. Reid and Beck would battle for the lead throughout the second half of the main event. While fighting for third place, Dave Bailey and Jim Lampman got hooked together going into turn one. Both were able to continue but lost several positions on the racetrack. Pete Reid would pass Beck for the lead on the last lap and would go on to score his third win of the season.


Go Fast Teeple and Danny Wurster set the pace in the main event for the Mike Knapp Ford Pro 4 Trucks with Teeple showing the way, driving the Dylan Llord truck. Mitch Dumont moved into second place as Craig Vlasic raced in third. Divisional rookie Matt Cayouette flipped violently in turn two to bring the red flag out on lap five. Cayouette was alert and talking to medical personnel at the scene. When the red flag was lifted, Teeple was able to keep the lead on the restart as Dumont would challenge for the lead. Mitch Dumont would take the lead on lap seven and he would go on to score the win, his fourth of the season.

NEWS AND NOTES: Fans had the exciting chance to be on the race track and get the autographs from their favorite drivers during the Autograph Session. Austin Wood made his return to driving as he drove the Ray Hockridge owned #TEN Sportsman ride for the evening. Go Fast Teeple drove the Dylan Llord #13 Pro 4 Truck for the first time and had a successful night.

Next Sunday night, July 22, the cars and the stars of the BEI Lightning Series come to town for their annual visit as CAA Niagara presents a full card plus the second Eve of Destruction Enduro qualifier. Gates will open at 4:30 pm with racing getting underway at 6:30 pm. Kids are encouraged to join the Humbee’s Kids Club for their activities starting at 5:00 pm on race nights.