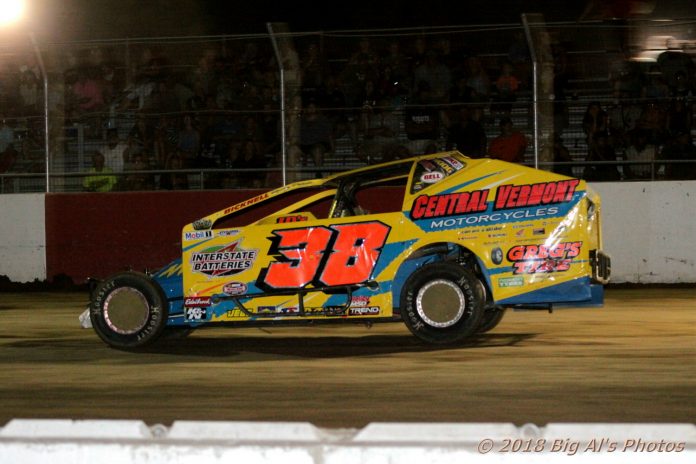 WEST HAVEN, VT – Sometimes things fall into place perfectly, and that’s just what happened for the Scarboroughs at Devil’s Bowl Speedway on Sunday, July 15. Twin brothers Joey and Jake Scarborough of Brandon, Vt., wanted to perform well in the Vince Quenneville Sr. Memorial event to bring full circle more than 50 years of racing lineage between the Scarborough and Quenneville families, and they did so in fine style by finishing first and second, respectively.

The Central Vermont Motorcycles Sportsman Modified division pulled down another solid field of 28 entries for the event, and veteran drivers Mike Palmer and Ron Proctor dominated the first half of the special 38-lap race honoring the late Quenneville’s most famous car number. The first caution flag waved at the halfway mark, and that’s when Jake Scarborough took over; he paced the field for the next six laps before being challenged and eventually overtaken by his brother.

The Scarborough twins drive cars bearing numbers 24 and 38, which each pay tribute to the late Norm Scarborough – one of the most accomplished car owners and chassis builders at Devil’s Bowl Speedway history, who won two championships in the late 1960s with Vince Quenneville Sr. as his driver. It was Joey Scarborough’s No. 38 in victory lane at the end of the race, with Jake’s No. 24 the runner-up.

Kenny Tremont Jr. rebounded from a tough week to finish third and reclaim the lead in the championship standings. Justin Comes earned his first top-five result of the season in fourth place ahead of the quickly-improving Allan Hammond. Kevin Chaffee was sixth, followed by Scott Duell, Adam Pierson, Alex Bell, and Tim LaDuc. Unofficially, Tremont’s lead is 11 points (362-351) on LaDuc.


The 358 Modified division returned to Devil’s Bowl for a double-feature format, running twin 20-lap races. Jessey Mueller of Olmstedville, N.Y., carried his recent string of success to his home track in the opening round, taking his first win on a dirt surface at the facility; he won 11 times on the former asphalt track at Devil’s Bowl. Neil Stratton of Bennington, Vt., was second, followed by Demetrios Drellos, Hector Stratton, and Frank Hoard III.

Neil Stratton was the winner of the second feature, taking his first win at Devil’s Bowl since an event held on the former 3/10-mile infield dirt track in 2014. Drellos finished second ahead of Mueller, Brian Whittemore, and Hoard. Travis Bruno walked away uninjured after a nasty flip in the second feature.

Michael Wagner-Fitzgerald of Gansevoort, N.Y., was a first-time winner in the O’Reilly Auto Parts Limited Sportsman division, gathering the victory in a right-place-right-time situation. Former Mini Stock champion Mike Ryan dominated the 20-lap race but had a hard-charging Kyle Hoard chasing him in the final laps. Hoard gave it his all entering the final corner, but contact with Ryan sent both cars off the track and allowed Wagner-Fitzgerald to dart from third place to the win. Brent Warren finished a tight second with point leader Travis Billington third. R.J. Germain and Mike Parodi round out the official top five runners.

Curtis Condon of Queensbury, N.Y., was a popular winner in the Super Stock division’s 15-lap feature race. A short field was certainly not short on excitement, as the dominant Chris Murray recovered from two spinouts to take the lead away from Condon on the white flag lap. The pair raced hard over the final half-mile, and Condon was able to survive contact in the final corner to take his first win of the season. Murray was second with Kevin Elliott third, Josh Bussino fourth, and rookie Andrew FitzGerald a career-best fifth.

Kaleb Shepard of Vergennes, Vt., was a first-time winner in the Portland Glass Mini Stock division, capping the night with a victory in a 15-lap feature. The popular Subaru driver, sometimes-known by his alter-ego “Snarve Bloomquist” took the lead from Mike Lique at lap 7 and never looked back. Lique was the runner-up, beating out point leader Chris Conroy, Shawn Moquin, and Chad White.

Devil’s Bowl Speedway’s next event is on Sunday, July 22, as Brown’s Orchard & Farm Stand and Brown’s Quarried Slate present the annual Street-Legal Spectator Races. Any street-legal vehicle (except motorcycles) will be allowed to race in the one-on-one, single-lap, elimination-style races; drivers must wear a helmet and seat belt and purchase a pit pass. Also in action will be the Sportsman Modified, Limited Sportsman, Super Stock, Mini Stock, and 500cc Mini Sprint divisions. 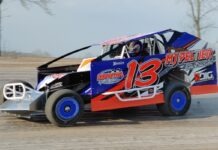