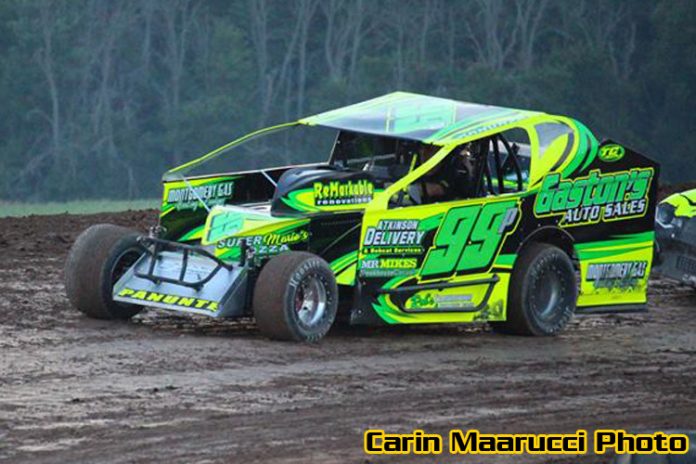 Tyler Puchalski and Justin Sharp brought the Harvey’s/Swiss Chalet DIRTcar Sportsman to the green flag for their 25-lap feature event with eighth-place starter Dylan Davidson coming to a stop, in turn, one on the opening circuit. Justin Sharp would take the lead away on the restart as Greg Panunte moved into second. Panunte would take the lead away on lap three as James Michael Friesen challenged Puchalski for third. Panunte would open-up his lead over the field as Friesen would take second away from Sharp. Brad Rouse was on the move as he took over third place off a lap nine restart and the top three of Panunte, Friesen, and Rouse would pull away from the rest of the field. Jordan Cosco would enter the top five on lap 17 as he passed Justin Sharp. With five laps remaining, Brad Rouse would pass James Michael Friesen to move into second, as Panunte pulled away from the field. Greg Panunte would go on to score his first feature win of the season.

Stan Zanchin and Jeff Dayman were on the front row for the 20-lap main event for the Pro Fabrication RUSH Late Models with Dayman jumping into the lead as Sam Pennacchio took over second. Rob Pietz moved into third with Chad Homan and David Pangrazio raced in the top five. Dayman would pull away from the field from Pennacchio. Colton Ledingham looped his racer in turn four to bring out the race’s first caution on lap 11. On the restart, Dayman would take off as the leader with Pennacchio, Pietz, Homan, and Pangrazio raced in the top five. Dayman would go on to score his first win of the season.

The JC Auto Thunder Stocks was brought to the green flag for their 20-lap feature by Rob Murray and Dave Bailey with Bailey taking the lead away with Murray, Jason Fontaine, Pete Reid and Barry Beck Jr racing in the top five early on. Jim Lampman entered the top five for the first time on lap five after getting around Reid. Bailey and Murray would pull away from the battle for third between Beck and Fontaine. Bailey would hold off Murray to score his third win of the season.

Evan Curtis and Jay Moulton shared the front row in the 20-lap feature for the Cosco Haulage Mini Stocks with Curtis taking the lead early on. After an early caution on lap four, Leroy Buscumb moved into the second position and would challenge the leader, Curtis. Curtis would open-up his lead over Buscumb and Cole Hardy. Olivier Larocque would get around outside pole sitter Moulton to move into fourth place with five laps remaining and would challenge Hardy and Buscumb. Curtis would go wire-to-wire to score the win.


Dylan Llord and Danny Wurster set the pace in the main event for the Mike Knapp Ford Pro 4 Trucks with Llord showing the way. Mitch Dumont would take the lead away from Llord on lap two and would pull away as Llord and Wurster battled for second place. Dumont would hold off Llord to score his fifth win of the season.

Alex Morris quickly jumped into the early race lead in the main event for the Vintage Cars. Kevin Lawes and Terry Larmet battled for second with Mark Shadwell raced in fourth. Shadwell would make it a three-car battle for second until Larmet took his racer to the pit area. Alex Morris would go on to score the win over Shadwell, Kevin Lawes, Conrad Baker, and Jeff Larmet would complete the top five. Vintage Car heats were won by Alex Morris and Mark Shadwell.

NEWS AND NOTES: 85 racecars signed in pitside for the night’s racing action. The crowd on hand was delighted with the driver introductions for the Pro 4 Trucks and RUSH Late Models. The Thunder Stocks, Mini Stocks, and Sportsman will all have special driver introductions throughout the rest of the season. Lap Sponsorships are available for the All Canadian Championships. To sponsor a lap, the Humberstone Speedway Facebook page for more information.

Next Sunday night, August 5 is the running of the longest-running events in Southern Ontario racing, the All Canadian Championships presented by Performance ATV and Leisure. A full card of Sportsman, Late Models, Thunder Stocks, Mini Stocks, and Pro 4 Trucks will be on the card plus the Vintage Cars will also be in attendance. Gates will open at 4:30 pm with racing getting underway at 6:30 pm. Kids are encouraged to join the Humbee’s Kids Club for their activities starting at 5:00 pm on race nights.