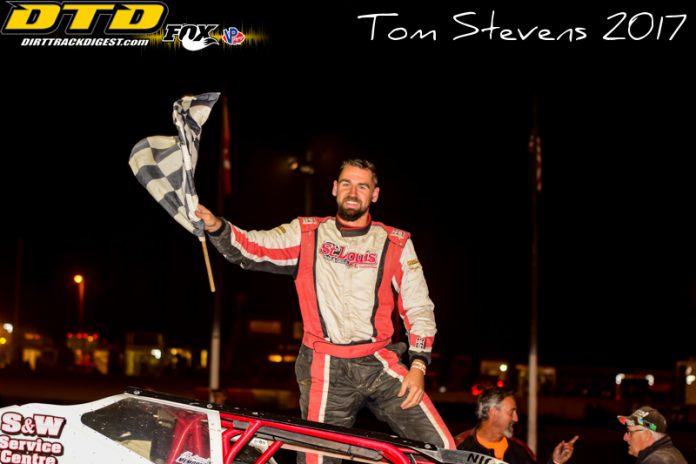 Jordan Cosco and Adam Leslie brought the Harvey’s/Swiss Chalet DIRTcar Sportsman to the green flag for their 50-lap main event with Leslie showing the way with Justin Sharp, Cody McPherson, Cosco, and Dylan Davidson racing in the top five. Leslie would stretch his lead over Sharp and McPherson in the early stages of the main event. McPherson would take second place away from Sharp on lap 13 and would go after race leader Adam Leslie. The leaders would hit lap traffic on lap 15, allowing Brad Rouse to work into third place after passing Justin Sharp. The caution would fly on lap 23 as Rob Sauder spun in turn one. The restart would see Leslie continue to show the way. McPherson would take the lead away on lap 35 as Leslie got loose exiting turn two. Rouse would be able to take over the runner-up spot and would start to reel in McPherson. Chris Storm and Robbie Johnston made contact, in turn, one to bring out the caution with five laps remaining. The late-race restart would see McPherson and Rouse pull away from the field. Robbie Johnston and Derek VanMil collided, in turn, one with Johnston going on his side to bring the red flag out on lap 46. The restart would see McPherson pull away and would go on to score his fourth win of the season.

Jeff Dayman and Ken Winfield were on the front row for the Pro Fabrication RUSH Late Models feature event with Dayman showing the way with David Pangrazio, Chad Homan, Rob Pietz, and Ken Winfield racing in the top five. Pangrazio would take the lead away from Dayman on lap six and would stretch his lead over the rest of the field. Pangrazio would jump back into the lead off a lap nine restart as Rob Pietz, Chad Homan, and Sam Pennacchio went three-wide for third place. Pennacchio would take second away from Dayman on lap 13 and would begin to go after race leader Pangrazio. The caution would come out on lap 19 for a Stan Zanchin spin in turn three and on the restart, Chad Homan came to a stop in turn three. Over the last 11 laps, Pangrazio would hold off Sam Pennacchio and Rob Pietz to score his first career event at New Humberstone.

The JC Auto Thunder Stocks was brought to the green flag for their 30-lap feature by Jesse McDonald and Bryce Richardson with Richardson showing the way early. Justin Ramsay would take the lead away on lap two. Dave Bailey would move into second place also on lap two and would go after Ramsay. Multi-time feature winner Rob Murray slowed on the front stretch to bring out the races’ first caution on lap six. The restart would see Ramsay, Bailey, and Jason Fontaine pull away from the field. Bailey and Ramsay would battle for the lead for several laps as Billy Bleich Jr moved into third and then went around Bailey for second on lap 12. Ramsay, Bailey, and Bleich would battle for the lead with Trevor DeBoer racing in fourth place. Bailey would take the lead on lap 21. Bailey would hold off Bleich and DeBoer over the final nine laps to score his fourth win of the season.

Jeremy Cooper and Leroy Buscumb shared the front row in the 20-lap feature for the Cosco Haulage Mini Stocks with Buscumb taking the lead as Evan Curtis moved into second off the drop of the green flag. Curtis and Buscumb would battle for the lead as Olivier Larocque looked on from third place. Larocque would move into second and on lap seven, would challenge Buscumb for the lead. As the field hit lap traffic, Larocque would close the gap on Buscumb and on lap 14, would take the lead away. John Lubeck brought out the caution on lap 19, setting up a one-lap dash for the cash. Larocque would hold off Buscumb to score the win, his third of the season.

Dylan Llord and Vince Fargnoli set the pace in the main event for the Mike Knapp Ford Pro 4 Trucks feature event with Llord showing the way with teammate Mitch Dumont working into position number two. Llord and Dumont would battle for several laps for the lead as veteran Danny Wurster raced on in third place. Dumont would take the lead away from Llord on lap 10 and would start to pull away. Wurster would take second away from Llord after Llord suffered a flat right rear tire on lap 15. Dumont would go on to score his first All Canadian Championship, and sixth feature win of the season.

The Sportsman feature for the Thunder on the Dirt Vintage Series saw Andy Imbeault take the lead early on from his outside pole starting position. Imbeault would lead all 12 laps to score the win over Kevin Lawes, Conrad Baker, Jeff Larmet, and Steve Lackie. The Modified feature would see Alan Byerly lead from his pole position. Byerly would lead Rick St. Pierre and Alex Morris. St. Pierre would take the lead away from Byerly on lap six and Alex Morris would take over second place. St. Pierre would hold off Morris to get the win with Byerly, Bill Willard Jr, and Jim Kirkwood completing the top five. Vintage Car heats were won by Alan Byerly, Andy Imbeault, and Conrad Baker.

NEWS AND NOTES: 123 racecars signed in pitside for the 56th edition of the All Canadian Championships. The crowd on hand was delighted with the driver introductions for the Mini Stocks.

Next Sunday night, the cars and stars of both the BEI Lightning Series for Sportsman and the Action Sprint Tour presented by RaceRivals.com will be on hand. Verge Insurance Center will present the racing action that will also feature the Late Models, Mini Stocks, and Pro 4 Trucks. Gates will open at 4:30 pm with racing getting underway at 6:30 pm. Kids are encouraged to join the Humbee’s Kids Club for their activities starting at 5:00 pm on race nights.