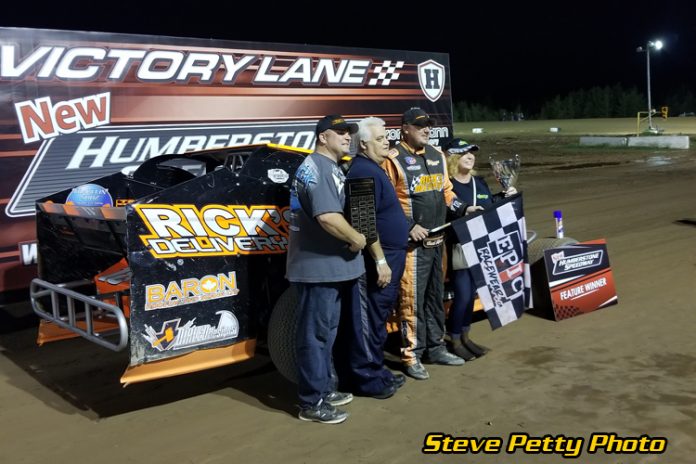 Tyler Puchalski and Chad Chevalier brought the Harvey’s/Swiss Chalet DIRTcar Sportsman to the green flag for the Gabe Bellante Memorial 40-lap main event with Chevalier jumping in the lead. After a pair of cautions plagued the beginning of the main event, Chevalier would take off out front as Brad Rouse and Dylan Davidson moved into second and third respectively. Cody McPherson would battle with Luke Carleton for fourth place on lap seven and would complete the pass exiting turn two. Rouse would catch race leader Chevalier while the leader was in lap traffic. Off a lap 11 restart, Chevalier and Rouse would take off as Davidson was challenged by McPherson for third place. Davidson’s strong night would come to an end on lap 13 after having motor issues. The restart would once again see Rouse and Chevalier battle for the lead as Adam Leslie moved into third place. Rouse would take the lead away from Chevalier on lap 16. Leslie and Chevalier would battle for second for several laps as Rouse would start to pull away from the field. Chevalier would regain the runner-up position on lap 21 as McPherson would take over third from Leslie on lap 23. Rouse would pull away from the field and he would go on to score the win, his second of the season and second Gabe Bellante Memorial victory.

Sam Pennacchio and Stan Zanchin were on the front row for the Pro Fabrication RUSH Late Models feature event with Pennacchio quickly taking the lead as Jeff Dayman battled with Zanchin for second place. Chad Homan would take third away from Zanchin and would challenge Dayman for second in the races’ early stages as Pennacchio pulled away from the balance of the field. Homan would move into second on lap six and would start to go after Pennacchio. Homan caught Pennacchio on lap 15 while working lap traffic. Pennacchio would go on to score his first feature win of the season.


The JC Auto Thunder Stocks was brought to the green flag for their 20-lap feature event by Pete Reid and Billy Bleich Jr with Bleich taking off in the lead. With Bleich in the lead, Jason Fontaine would move into second place with Reid, Cory Sawyer, and Barry Beck Jr racing inside the top five. Sawyer would take over third place on lap 12 after Pete Reid got loose entering turn three. The caution would fly for the first time on lap 16 as Mitch Dumont spun, in turn, three, erasing Bleich’s lead over the field. Bleich and Fontaine battled for the lead as Fontaine took the lead with two laps remaining. Fontaine would hold off Bleich to score his first win of the season.

Jeremy Cooper and Jay Moulton shared the front row in the 20-lap feature for the Cosco Haulage Mini Stocks with Moulton showing the way and Evan Curtis moving into second place at the end of the opening circuit. Curtis would challenge Moulton for the lead as Cooper, Olivier Larocque, and Craig Vlasic battled for positions inside the top five. Cole Hardy would enter the top five just before the halfway mark after Cooper bobbled in turn one. Vlasic and Hardy would move into third and fourth place respectively on lap 15 after Larocque miscued in turn four. Moulton would pull away from Curtis to pick up his first win of the season.

Danny Wurster used his outside pole position to take the early lead in the main event for the Mike Knapp Ford Pro 4 Trucks feature event. Mitch Dumont would quickly take over second and then would take over the lead on lap three. Dumont would pull away from Danny Wurster and would drive on to score his eighth feature win of the season.

NEWS AND NOTES: 68 racecars signed in pitside for the night’s racing activities. The crowd on hand was delighted with the driver introductions for the Sportsman prior to the start of the Gabe Bellante Memorial.

Next Sunday night, the mighty Modifieds return to New Humberstone as Pete Cosco Haulage presents the Pete Cosco Memorial, a $4,000 to win 75-lap special for Modifieds. The Race of Champions Dirt 602 Sportsman Series will be on hand for their $2,000 to-win special to honor Pete Cosco. The Late Models, Thunder Stocks, Mini Stocks, and Pro 4 Trucks will also be in action. Showtime is at 6:30 pm.

All kids in attendance can check out the activities with the Humbee’s Kids Club happening at 5:00 pm each race night on the second floor of the VIP Tower.