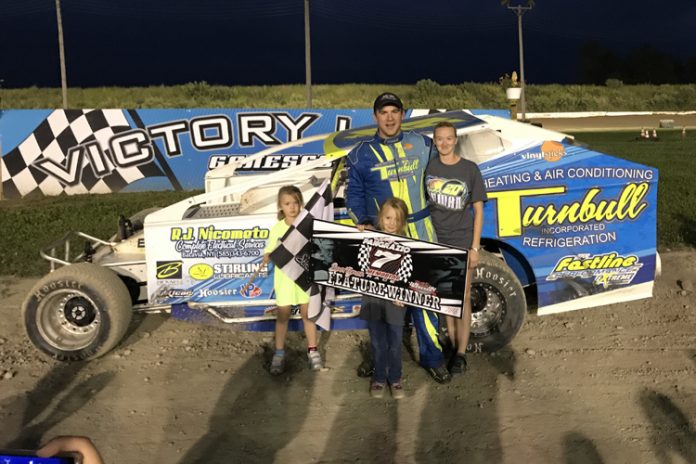 BATAVIA, NY – A speedy night at the Genesee Speedway saw a slew of tight finishes on a perfectly-prepared race track for the Terry Pangrazio Memorial.

The Crate Late Model Feature saw Bill Holmes take the early lead and set out to a comfortable advantage for much of the feature; in the waning laps though, lapped traffic became dense and Holmes saw JJ Mazur run him down and make things interesting on the final circuit. Coming off the final corner, Holmes was stuck behind lapped cars battling three-wide off the corner for position. Holmes was able to keep enough momentum to claim his second win of the year, closing the gap slightly on the points lead held by JJ Mazur, who followed across closely in second. Beamer Guzzardi was also up with the lead duo and placed in third, with Doug Ricotta a solid fourth. David Pangrazio completed the top five.

Kyle Inman put on one of the craftiest and well-planned moves of the season to take the lead from Tony Pangrazio on lap 17 and then drive away to win his second Sportsman feature of the season and move one step closer to his third-straight track championship. Inman, of Darien, had to battle with Pangrazio since the initial green flag, as those two duked it out for second until what would be the races only caution on lap three. On the ensuing restart, Pangrazio took the lead from Cody Wolfe and Inman was quick to follow through to second. Inman hounded the 41 for a dozen laps, peeking to the inside on multiple occasions, but found that his motor was bogging down too much off the corner to complete a pass. On lap 15, he showed the nose to the inside of the leader enough to make him move another groove lower on the track. Two laps later, Inman worked up to the time and rode the rim around Pangrazio to take the lead. Once taking the top spot he checked out and ran away. Pangrazio crossed in second, only to be disqualified after the race for coming up light at the scales. Jim Harbison, who was in the mix for the lead for much of the race, would end up second while Austin Susice would place third. Zach George and Dave Conant would drive up to complete the top five.

Dave DuBois became the first driver to lock up a track championship for 2018 as he dominated the 360 Late Model feature for his eighth win of the year. DuBois took advantage of the top lane on a lap two restart and got in front of Rich Hale and then held a comfortable distance throughout the 15 lap feature. The championship for “The Outlaw” is his eighth career at Genesee, his seventh in a row. Rich Hale scored his best run of the year coming home in second. Tom Baker stole third away from John Zimmerman while Tommy Kemp rounded out the top five.

To conclude the show, the Street Stocks were certainly the most drama-filled of the night. A host of incidents took top names out of the event, most notably on lap 15 when leader Byron Dewitt slapped the frontstretch wall coming out of turn four and then came to a stop a half-lap later. Doug Jones inherited the lead and had to work hard to hold back the advances of Josh Pangrazio, who had his tribute No. 7 car charging hard. The two had banged in to one another hard during the middle of the race, but were able to throw each other a thumbs-up under an ensuing red flag. On the final circuit, Pangrazio tried a crossover move in turns one and two, then went and used the high side in turns three and four to pull even with the No. 11x of Jones coming to the checkered. The two were locked together coming to the line with Jones beating Pangrazio back to the line by just .037 seconds. Pat Powers placed in third with Bill Taylor and Dennis Cummings rounding out the top five.

Dante Mancuso won another epic Mini Stock Feature, as nearly a half-dozen drivers had a look at the race lead at some point in the 15 lap feature. Cole Susice led early but on a lap 8 restart but slid over the berm in turn two to allow Mancuso to take the lead. Chris Leone then took a peek at the lead, only to suffer a similar fate on lap 11, sliding over the banking. The final challenger to Mancuso was Brad Shepard, who put a nose under the No. 1, but in lapped traffic Mancuso was too strong and picked up his fourth win to pad his point lead heading in to the final week. Shepard would settle for second, ahead of Eric Weis while Susice would rally to fourth, ahead of Brandon Shepard.

Jessica Traxler finally broke off her streak of runner-up finishes to claim her first Bandit Feature win of the season. Traxler, the 2017 division champion from Warsaw, held command of the event from start to finish without much challenge after taking the initial lead from Adam Jackson. Jackson would settle for second, holding off Greenley George while point leader Bailey Logsdon lost two laps with a flat tire.

Next Saturday is the final night of the regular season with all six divisions in competition, including the 29-lap Russ Prentice Memorial for the 360 Late Models. Race time is set for 6:00 P.M. For more information visit www.Genesee-Speedway.com.