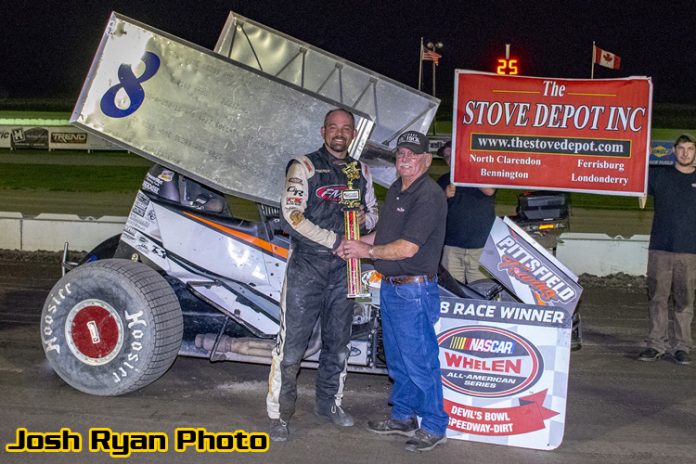 Comes put on a show in the 30-lap feature race for the Central Vermont Motorcycles Sportsman Modified division of the weekly NASCAR Whelen All-American Series. The Middlebury, Vt., racer started 10th and worked his through traffic on the far outside lane, living up to his “High Side Hustler” nickname. Comes passed John St. Germain Jr. for the lead at lap 18 and briefly sailed away from the pack, but track championship point leader Kenny Tremont Jr. chased Comes down and caught him in the final two laps.

Tremont pulled even with Comes during the final lap, but Comes was able to hold him off in a furious drive to the finish line. St. Germain posted his best finish of the year by a long shot with third place, and Adam Pierson was fourth.

Low-buck underdog Brian Whittemore finished fifth in the race and clinched the first-ever championship in the five-race Central Vermont Motorcycles “Challenger Series” for drivers who had not won a dirt track feature race at Devil’s Bowl in the modern era since 2010. Whittemore received a big cheer from the crowd in victory lane.

Double-duty driver Pierson scored a career milestone with his first win in a winged Sprint Car, with a dominating performance in the 25-lap race for the visiting Sprint Cars of New England tour. The East Corinth, Vt., driver recently stepped into the Bruce Clattenburg-owned No. 8 car in a fill-in role and needed just three weeks to get to victory lane.

Will Hull and Bobby Hackel had a very entertaining battle for the runner-up spot, which originally went to Hackel, but he was penalized two positions by race control for driving under the inner tire barrier to complete a pass. That put Hull into the second position officially, followed by Matt Hoyt, Hackel, and Dan Douville.

Hull, of Plainfield, Vt., clinched the five-race Sprint Car track championship by overtaking Douville in the point standings, and just 24 hours after a violent flip at Bear Ridge Speedway nearly destroyed his car.

Eighteen year-old Paolo Pascarella of Troy, N.Y., earned his first win in three months in the O’Reilly Auto Parts Limited Sportsman division, dominating a 20-lap race. Pascarella shot from fifth place at the start to take the lead from Larry Gallipo five laps into the race, and had no trouble walking away with the win. Travis Billington came from 11th to finish second, ahead of point leader Brent Warren. Joey Roberts was fourth and Gallipo scored his first-ever top-five finish.

It wasn’t even close in the 20-lap Super Stock feature, as Fair Haven, Vt.’s Chris Murray won by more than half a lap for his ninth victory of the season. Curtis Condon rebounded from a trip off the backstretch at the midway point in the race to finish second. Josh Bussino, Scott FitzGerald, and Kevin Elliott completed the top five.

Mike Preston of Panton, Vt., ran to his fourth win of the year in the 15-lap race for the Portland Glass Mini Stocks. Tim Simonds reeled Preston in over the final laps but settled for a career-best second place. Point leader Kaleb Shepard took third over Brad Bertrand and Shawn Moquin.

Devil’s Bowl Speedway is back in action on Sunday, September 9, as Casella Waste Management presents the Leon Gonyo Memorial 50-lap special for the Sportsman Modifieds – the final tune-up before the historic Interstate All Battery Center Vermont 200 on Sept. 15-16. All five weekly divisions will be on the card, along with the Ladies Mini Stocks. Regular general admission is $12 for adults, $10 for seniors (age 62+), $5 for teens (age 13-17 with proof of age), and free for kids age 12 and under. Gates open at 4:30 p.m. and racing starts at 6:00 p.m.