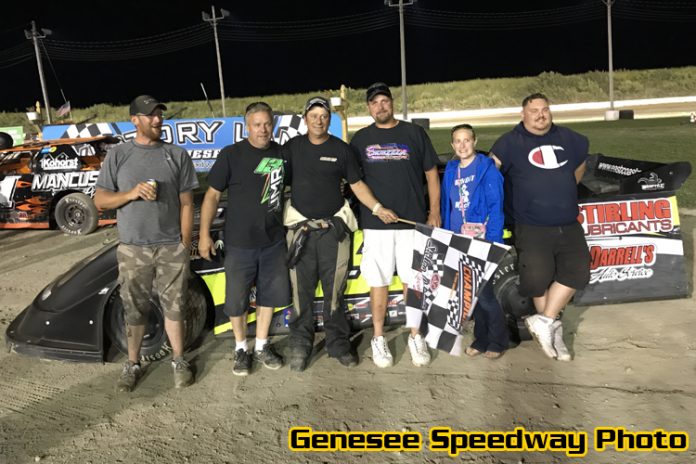 BATAVIA, NY – In what is the final weekly event for the 360 Late Models at Genesee Speedway, John Zimmerman made sure to leave with good memories, as he led wire-to-wire to win the 25-lap, $1,000-to-win finale presented by Johnson Automotive. Zimmerman, of Burt, was able to score his second win of the season over Jeremy Wonderling and Dave DuBois, who hung with him but were never able to apply enough pressure throughout the feature. Only once did the caution flag have to wave, but that caution period on lap 16 was much-needed for “The Z-Man” as he was able to relax his fingers for the rest of the long extra-length race. Dave DuBois had already locked up his eighth Genesee Track Championship entering the night and he and his crew were sure to celebrate in style after the event. Rounding out the top five were Tommy Kemp and Tom Baker.

Jon Rivers captured his second career Crate Late Model Feature win in the 25-lap event. After finally breaking through for his first win in the division last month, the veteran was able to reel off his second win in the last three races by holding back JJ Mazur. The race ran off caution-free until just after halfway, allowing Mazur to close up on the No. 85. As the race wore on, Mazur began to reel in the leader and started to challenge in the final two laps, but it was “Jonzilla” would could not be dethroned on the night. Mazur’s second place finish was good enough to secure his second-straight Genesee Track Championship. David Pangrazio was third, just in front of Bill Holmes and Doug Ricotta, who completed the top five.

Ray Bliss put on a clinic in front of the field in the Sportsman Feature to score his second win of the season. Bliss, of Warsaw, took the lead from the outside pole and then was prolific on each restart to capture his first win at the Genesee since May 12th. It was the second time in the last three seasons that Bliss won the final point race of the season. The racetrack was fast and Bliss saw a host of drivers challenge him for the top spot, including youngster Cody Wolfe who was able to finish in second. Kyle Wendt drove up to finish in third while polesitter Tony Pangrazio crossed in fourth. Austyn Fugle rounded out the top five, just ahead of Kyle Inman, who placed in sixth, which was good enough to capture his third-straight Sportsman Track Championship.

Doug Jones scored his third Street Stock win of the season and his second in as many weeks, as he made a late-race pass on Bob Babbitt to collect the win in a competitive 20-lap event. Ryan Allen led the first 15 laps but was hounded by four fast cars and after laps of trying veteran Bob Babbitt finally was able to take the lead. Less than a lap later, Doug Jones, who also got by Ryan Allen on lap 16, drove underneath the leader and took the lead, setting sail on the pack to cruise to the victory. Babbitt would settle for second while Jesse Qutermous drove up to third. Dennis Cummings did not have his finest night, but his fourth-place showing was more than enough to claim his first career Genesee Track Championship. The Wellsville Driver won two races early in the season and then used consistent finishes to hang on to the point lead. Rounding out the top five was early race leader Ryan Allen.


The final race of the night was filled with drama as the Mini Stock Feature saw Cole Susice win and then have to wait and see how the points tabulated for the championship. Susice took the lead on a lap five restart and sliced through lapped traffic to capture his third win of the season. Brandon Shepard held off Brad Shepard for second while Chirs Leone crossed in fourth. Point Leader Dante Mancuso had a throttle linkage issue on lap five and had to surrender the lead but was able to make it back out and drove up from 21st to finish 5th, which was good enough to win his second-straight Genesee Track Championship in the division.

All Bailey Logsdon had to do was start the Bandit Feature to claim her first Genesee Track Championship, but she did plenty more than that, winning her seventh feature of the season in dominating fashion. Logsdon hit her marks throughout the caution-free event to defeat defending champion Jessica Traxler. Adam Jackson raced up to round out the podium.

The final night of the regular season at Genesee Speedway not only saw six drivers claim their hard-fought championships, but on a Chamber of Commerce night in Batavia, race teams and fans collaborated for a great cause. Fans and Drivers did a “Buck Pass” for Warrior House of WNY, the presenting sponsor of the night, and were able to raise $1,032 for the great cause. A total of 91 cars were in the pits on the night.

With the regular season now over, the postseason ramps up with the 2nd Annual Topless Crate Nationals on Saturday September 15th and Sunday September 16th. For more information, visit www.Genesee-Speedway.com.