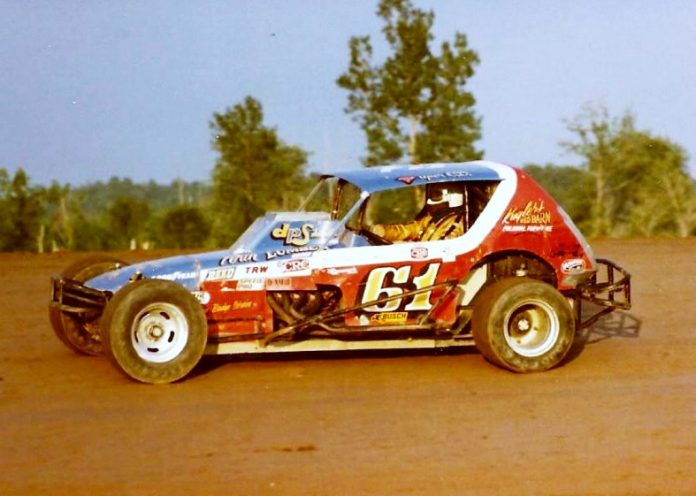 WEST HAVEN, VT – The Interstate All Battery Center Vermont 200 at Devil’s Bowl Speedway just got a little bigger. Legendary dirt track Modified stock car driver “Super” C.D. Coville has been named the Grand Marshal of the event and will deliver the most famous words in motorsports: “Drivers, start your engines.”

Coville’s presence adds to the luster of the biggest event in Vermont dirt track racing history. The 200-lap, $10,000-to-win race on Sunday, September 16, has drawn interest from drivers and fans from up and down the East Coast and into Canada.

All qualifying and racing action for the Sportsman Modified division will be held on Sunday beginning at 2:00 p.m. Also on Sunday will be a $1,000-to-win four-cylinder Mini Stock race presented by Portland Glass, and the $1,029-to-win “Carl Vladyka Memorial” championship finale for the King of Dirt Racing Pro Stock Series.

Often-controversial, Coville was a star at Devil’s Bowl for nearly 20 years during his illustrious career. Either loved or hated by fans, the Fultonville, N.Y., driver was the track champion at the West Haven, Vt., facility in 1979, 1982, and 1995, and has 27 documented wins there among the more than 150 overall victories in his career.


Coville’s role as the Grand Marshal of the Vermont 200 brings full-circle a decades-long relationship with the family of Devil’s Bowl Speedway promoter Mike Bruno. Coville drove for the late John Bruno, Mike’s father, in the late 1980s, and says he is a fan of Mike’s son, 15 year-old Mini Stock driver Johnny.

“John always gave everything one-hundred percent, but when I started driving for him it took a few weeks for us to get up to par as a new team,” Coville remembered. “My wife stayed home one night that we were at Devil’s Bowl because she didn’t want to see me keep losing. Well, we won that night,” he said with a laugh. “I’m sure John would be proud of what Mike has done at Devil’s Bowl, and I’m excited to meet Mike’s boy, Johnny.”

Coville also shared a fond memory of racing at Devil’s Bowl against another legend, “Barefoot” Bob McCreadie, while driving the famous Perth Lumber Wagon No. 61 car.

“One race that always stood out to me from Devil’s Bowl – I’m pretty sure it was a Syracuse qualifier race, and McCreadie was in town,” Coville said. “We were going at it hard every lap, back and forth, running way up high and banging off the wall like they do at Eldora. That was a lot of fun, and I beat him.”

Coville has remained deeply involved in dirt track racing through his involvement with the Fonda Speedway, and says he is excited to reunite with old friends at the Vermont 200.

“I’m looking forward to getting to see some people that I haven’t seen in a long time,” Coville said. “I’ve run into a few Devil’s Bowl folks at Fonda, but it’ll be great to get back there for that big race. I hear the party on Saturday night is a lot of fun, too, and we’re going to try to be up there for that.”

A star-studded list of drivers is building for the Interstate All Battery Center Vermont 200. More than 35 drivers have filed official entry forms for the race, with that number expected increase by 40 or more on race day. Among the top runners expected are Kenny Tremont Jr., Connor Cleveland, Vince Quenneville Jr., Hector Stratton, Bucko Branham, Tim LaDuc, Scott Duell, Bobby Hackel, and many more.

Information for the Vermont 200 Weekend is available on the Devil’s Bowl Speedway website at www.DevilsBowlSpeedwayVT.com, including the full weekend schedule, camping information, and lap sponsorships at just $50 each.