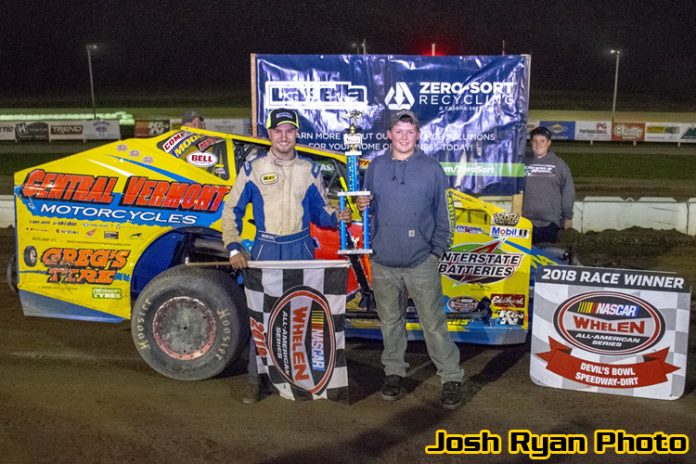 A crisp late summer night threw a curveball into Scarborough’s chassis setup plans, and he struggled through practice, qualifying, and hot laps in the Central Vermont Motorcycles Sportsman Modified division of the NASCAR Whelen All-American Series. Admitting that the setup his team threw at the car for the feature race was a total guess, Scarborough was surprised – and relieved – that it worked.

Veteran racer Ron Proctor held the lead for the first 18 circuits before Scarborough took over and drove away from the field. A huge lead was erased by a caution flag, and the ensuing restart brought Tim LaDuc to Scarborough’s rear bumper. Scarborough survived LaDuc’s challenge, and then outran a charging Adam Pierson in the final 10 laps for the victory.

Joey Roberts of Fletcher, Vt., notched his fifth win of the season in the O’Reilly Auto Parts Limited Sportsman division. Though it was scheduled to be a 20-lap sprint race, it turned out to be a marathon as several wrecks and spins slowed the pace including a big pileup on the opening lap which destroyed the cars of Mike Ryan and James Hanson. When the smoke cleared, Roberts had the best car and ran away for the win.

Shawn Moquin of Milton, Vt., was a first-time winner in the 15-lap race for the Portland Glass Mini Stock division. Moquin needed just one lap to drive from sixth starting position into the lead, and he would never relinquish command; Mike Preston reeled Moquin in but could not mount a challenge. Johnny Bruno was third ahead of Craig Kirby and Jake Barrows. Kaleb Shepard has a big 74-point lead on Moquin, 800-726, unofficially.

The 15-lap race for the Friend Construction 500cc Mini Sprints ended with a surprise as leader Austin Chaves’ car quit on him three laps from the finish. Chaves’ lead at the time was nearly half of a lap – so big that the next drivers in line could not see his car and, simply, forgot about him. When Chaves coasted into the pits, that left twin 13 year-old brothers Shawn and John McPhee of Rutland, Vt., to duke it out with Kevin Smith. Shawn McPhee led only the last lap after taking the spot away from his brother, for his second win of the year. John McPhee was second with Smith third, point leader Cody O’Brien fourth, and Colby Beinhaur fifth. Another 13 year-old, O’Brien, dodged a bullet and retained the point lead, leading Chaves by 24 markers, 608-584.

Mary Gardner of Granville, N.Y., earned her first win in the Ladies Mini Stock division, taking down an eight-lap race. Gardner held off the hard-charging Morgan Ballard, who was the runner-up, with Jessica Moquin third. Danielle Beckett was fourth with Connor McKee fifth.

The Interstate All Battery Center Vermont 200 Weekend is next on Sept. 15-16, which is shaping up to be the biggest event in Devil’s Bowl Speedway history. Saturday’s program begins at 4:00 p.m. and features a 50-lap Super Stock race, the 500cc Mini Sprints, and the Ron Casey Memorial non-winner’s race for Sportsman Modifieds, followed by an open practice session and the annual pig roast barbeque and bonfire party. Sunday’s event begins at 2:00 p.m. with qualifying for as many as 70 or more Sportsman Modifieds and a 200-lap, $10,000-to-win main event; the King of Dirt Racing Pro Stock Series and the Mini Stocks will also be in action on Sunday.

Admission is $12 on Saturday, $25 on Sunday, or just $30 for the two-day weekend ticket; kids 12 and under will be admitted for free. Pit passes are $40, good for both days. Camping is $25 per campsite, good from Friday at noon to Monday at noon.