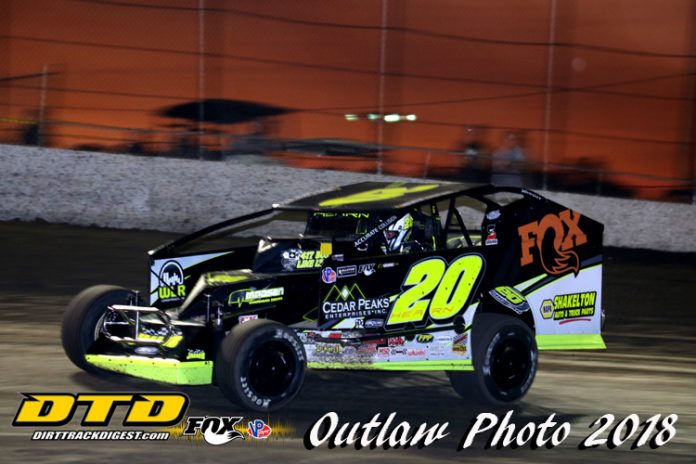 WEST HAVEN, VT – A star-studded roster of dirt track Modified stock car drivers is getting ready for the Interstate All Battery Center Vermont 200 at Devil’s Bowl Speedway on Sunday, September 16. The first-of-its-kind race for crate engine Sportsman Modifieds has drawn interest from no less than nine United States and two Canadian provinces, and as many as 70 or more drivers are expected to enter on race day.

Qualifying begins on Sunday at 2:00 p.m. with time trials, heat races, and consolation rounds. The 200-lap feature event will see a starting field of up to 34 cars gunning for the $10,000 top prize, and two B-mains will each pay $500 to win for non-qualified cars.

Topping the list of drivers expected on Sunday is Brett “The Jet” Hearn, a winner of more than 900 races during his career. The New Jersey native has not driven a Sportsman car in more than two years and has not raced at Devil’s Bowl Speedway since 2000, but he says he is ready to tackle the new half-mile surface and try to beat the local favorites for the money. He plans to compete in his own No. 20 car.

Eight-time Devil’s Bowl champion and current point leader Kenny Tremont Jr. will be waiting for Hearn when he arrives. The West Sand Lake, N.Y., driver has three wins at Devil’s Bowl in 2018 among more than 350 in his career, and he recently beat Hearn for a Super DIRTcar Series Modified win at Lebanon Valley Speedway.

Forty-year racing veteran Hector Stratton of Bennington, Vt., has filed an official entry into the event and looks to add to his 31-win Devil’s Bowl career. Rising Modified star and former Devil’s Bowl regular Jessey Mueller plans to return to his home track on Sunday; he won a Small Block Modified feature there in July. Former Albany-Saratoga Speedway champion Marc Johnson – a multi-time winner at Devil’s Bowl – is also expected to compete, as is Empire Super Sprint star Danny Varin.

Top Devil’s Bowl rookies Marty Kelly III and Tanner Siemons are expected, as well as many of the leading Limited Sportsman drivers including top-five point runners Brent Warren, Travis Billington, Joey Roberts, Paolo Pascarella, and Adam Piper. More drivers are expected to officially enter the event by the end of the week.

The Interstate All Battery Center Vermont 200 Weekend is jam-packed with racing action; also on the card for Sunday are the King of Dirt Racing Pro Stock Series with the 29-lap Carl Vladyka Memorial paying $1,029 to win, and the $1,000-to-win Portland Glass 50 for four-cylinder Mini Stocks. The two-day event kicks off on Saturday at 4:00 p.m. with a 50-lap, $1,000-to-win Super Stock race, the Friend Construction 500cc Mini Sprints, and the Ron Casey Memorial Non-Winners Shootout for Sportsman Modifieds.

Two-day general admission is $30 for adults (age 13+); single-day tickets are available on Saturday for $12 and Sunday for $25; kids age 12 and under are free. Pit passes are $40, good for both days, and camping passes are $25 each, valid Friday at noon to Monday at noon. Race entries for the Sportsman Modified division are $75 each, or $30 each for the Super Stock, Mini Stock, and 500cc Mini Sprint divisions.

Sponsorship for the event is underwritten by Interstate All Battery Center of Rutland, with support from Fabian Earth Moving, Portland Glass, Kubricky Construction, and Central Vermont Motorcycles. Lap sponsorships are still available for $50 each; email devilsbowlspeedway@gmail.com for more information.