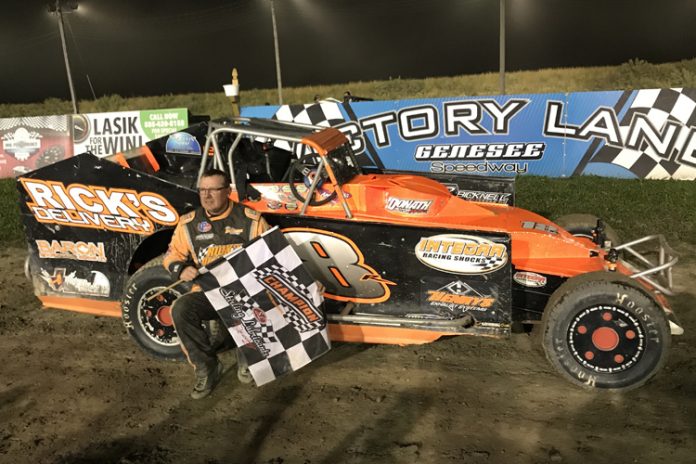 BATAVIA, NY – Jason Genco continued his amazing season at the Genesee Speedway on Saturday Night, as he captured the opening night of the Topless Crate Nationals for the second year in a row.  Genco, of Frewsburg, NY, dominated the 25-lap, $1,500-to-win feature, holding a healthy lead throughout the event to claim his fourth win of the season at the 1/3-mile oval.

“I wasn’t sure if the bottom was going to be the place to be but clearly it wasn’t because the top was just so good for me tonight,” said Genco in Victory Lane.


Genco was strong from the start of the night, turning the quickest lap in timed hot laps, winning his heat, and then drawing the outside pole for the feature. The No. 29J quickly pounced on the lead at the initial green flag then used a safe but steady line 2/3 of the way up the track.  The race required some restarts, but nothing seemed to phase the Rush Series point leader as he kept hitting his marks to drive away to the win.

Doug Ricotta recorded his best run of the season with a fine second place showing.  Ricotta had to fight off some fast competitors on double-file restarts to hang on to the runner-up position and then drive away during the long green flag runs.  Scott Gurdak made his first appearance at Genesee count with a third place showing, holding back Jeremy Wonderling, who crossed in fourth.  Track Champion JJ Mazur rounded out the top five.

Brad Rouse and Kyle Inman battled one another for much of the 2018 around the Northeast, and they were able to duke it out once again on Saturday Night in the 25-lap Sportsman Feature.  Rouse, of St. Catharine’s, Ontario, was able to hold off late-race advances of Inman to claim the $1,500 top prize.

“When the track gets slick we are on our game and the track was great,” stated Rouse in Victory Lane.  “Kyle is a good competitor and I knew he would be right there the whole way.”

Inman started on the pole, but Rouse had the preferred line on the outside and was able to win the dual with the No. 20k coming to the complete the first lap.  The first caution of the race did not occur until lap 14, but on the restart Inman started to show signs of life going after the leader, one lap later though he would slide up high and lose any forward momentum he would gain.  On the final restart of the race with three laps remaining, Inman stayed close but was unable to get by and had to settle for second.  While the top two had a fine battle for the win, Ray Bliss and James Michael Friesen ran side-by-side for third place for much of the race, with Bliss coming out on top.  Austyn Fugle would round out the top five.

In the first ever performance by the Rush Sprint Cars to the Genesee Speedway, series point leader Chad Ruhlman put on a clinic, leading all 20 laps to stay nearly perfect for the season.  Ruhlman, of Bemus Point, NY, took the lead from the pole and thought the top line would be the place to run, but quickly found that he had to get to the bottom line and hit his marks in his No. 87R to pull away from fellow heat winner Shawn Smith, who ran strong to finish in second.  Brian Woodhall was steady all night to place in third, while Zackery Bealer had a strong drive forward to finish in fifth.  Steve Cousins would round out the top five.

Doug Jones stayed hot late in the season as he won his third-straight feature in the $1,000-to-win Street Stock Feature.  Jones took the lead from Adam DePuy on lap eight and then held off Kurt Stebbins and Josh Pangrazio to claim the third race in the street stock series.  The win was the fourth overall on the year for Jones in the No. 11x.  The race had a great five-car battle for the lead.  Kurt Stebbins appeared at times that he might be able to steal away the win, but as the laps closed out, Stebbins had to focus more on holding off Josh Pangrazio, who charged hard but would come across just behind Stebbins in third.  Early Leader DePuy fell back to fourth while track champion Dennis Cummings drove up to round out the top five.

Brad Shepard made a slick move on a lap 13 restart to move by Chris Leone for the lead in Mini Stock Feature and drive away to capture his second win of the year in the 20-lap special. Shepard, of LeRoy, chased Leone for the first dozen laps but just did not have enough momentum to get on by.  On the restart, Shepard timed the jump perfectly and moved to the inside of the No. 62, using the bottom line to finally get in to the lead after a full two laps of battling.  The three-time track champion survived some late race restarts to win on Crate Nationals weekend for the second year in a row.  Leone would settle for second while Bill Weller Jr drove up to finish in third. Casey Burch got back by James Gayton in the closing laps to cross in fourth.

An impressive 130 cars were in the pits for the opening night of the Topless Crate Nationals.  For more information, visit www.Genesee-Speedway.com. ciu