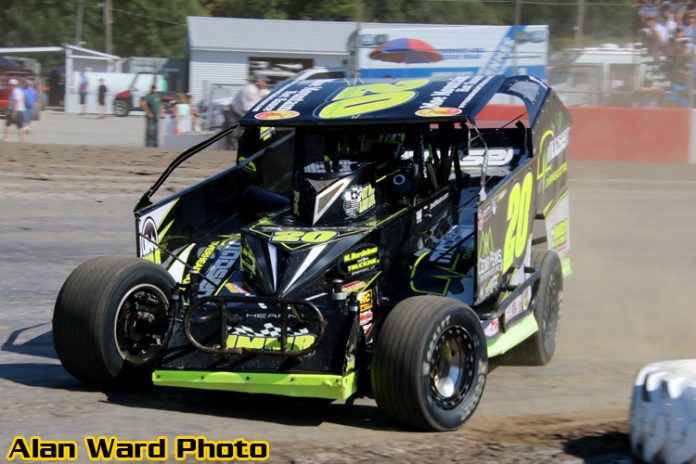 WEST HAVEN, VT – Brett Hearn added to his legendary dirt Modified stock car racing career at Devil’s Bowl Speedway on Sunday, September 16 by winning the biggest event in the track’s 52-year history at the Interstate All Battery Center Vermont 200. The Kinnelon, N.J., star entered as the favorite to win the $10,000 prize, but the race was anything but easy before he tallied the 910th win of his career and his first at Devil’s Bowl since 1994 in front of a monster grandstand crowd.

Driving a crate engine Sportsman Modified for the first time in more than two full years, Hearn didn’t miss a beat. He turned the fastest lap in time trial qualifying, and then won the pole position in a random draw before the main event. Hearn showed the way as the race leader and threatened a runaway, but his car suffered a flat left-front tire on lap 31 during the race’s first caution period and he was forced to make a pit stop. Hearn was relegated to 27th place in the lineup when racing resumed.

Local driver Joey Scarborough of Brandon, Vt., and former track champion Bobby Hackel of Rensselaer, N.Y., squared off at the restart; Hackel led one lap, then Scarborough paced the field for a dozen circuits before Hackel took back over at lap 45. Jessey Mueller made a charge and grabbed the lead at lap 53, holding it through the halfway break and all the way to lap 121 before Hackel made his way to the front again. Hearn, meanwhile, had a few nervous moments in heavy traffic, but reached the top five just before the three-quarter mark of the race.

The race came to a grinding halt with 144 laps complete as 13 cars piled up at the flagstand, drawing a red flag that lasted nearly 30 minutes as cars were lifted off of each other and towed away; no injuries were reported and most drivers were able to continue, though several cars were thoroughly destroyed.

Hackel and Hearn found themselves locked in a battle for the lead for almost 20 laps after the wreckage was cleared, with Hackel holding off the “Jersey Jet” as the crowd grew more anxious. Most of the top drivers got their work done on the outside lane, but Hearn had to use a crossover move to get underneath Hackel and retake the lead at lap 161. From there, he cruised uncontested to the big payday, which included $10,000 cash and a another $3,100 in combined lap leader cash and product certificate bonuses.


Adam Pierson of East Corinth, Vt., put together a strong second-half of the race and was as quick as Hearn in the final 30 laps. He caught and passed Hackel for second place but ran out of time to make a serious run at Hearn and settled for the runner-up spot and $4,000. Hackel’s third-place finish and lap leader bonuses gave him $4,850, unofficially, and Mueller’s total take for fourth place was $4,500 including bonuses.

Visiting Super DIRTcar Series star “Doctor” Danny Johnson of Rochester, N.Y., came to life late in the race and finished fifth after starting 13th, and David Schilling made a strong drive in the final circuits for sixth place after starting 23rd. Scarborough ended up seventh ahead of Connor Cleveland, Kevin Chaffee, and Jack Speshock.

Fifty-six drivers attempted to qualify for 34 starting positions. Qualifying heats were won by Hackel, Tim LaDuc, Jimmy Ryan, Scott Duell, Mueller, and Pierson, while Chad Edwards and Rocky Warner won the last-chance consolation races. Rookie Marty Kelly III of North Bennington, Vt., earned a $250 certificate from Beyea Custom Headers and a $50 certificate from Shiley Fabrication as the “Hard Charger” of the race, driving from 33rd to 15th for a gain of 18 positions. D.J. Robinson and Travis Bruno each collected $500 for splitting wins in the B-Main races for non-qualifiers.

The King of Dirt Racing Pro Stock Series came to Devil’s Bowl Speedway to crown its 2018 season champion in the second annual “Carl Vladyka Memorial” 29-lap race, and Jason Casey of Canaan, Conn., emerged with his first KOD title. Nick Stone of Schenectady, N.Y., won the race in a convincing drive, but Casey’s second-place finish was good enough to net him the championship.

Devil’s Bowl Speedway’s weekly Mini Stock division turned out 30 cars strong for the $1,000-to-win “Portland Glass 50” event, but a rough-and-tumble race cut the distance in half to 25 laps due to time constraints. Nevertheless, Jason Porter made his 260-mile trip from Freeport, Maine, a success as he won a very competitive race for his fifth win of the season. Glen Ridge Motorsports Park champion P.J. Bleau was the runner-up with Legion Speedway star Erin Aiken third.

Devil’s Bowl Speedway closes its 2018 season on Sunday, September 23 with the championship finale for the Sportsman Modified, Limited Sportsman, Super Stock, Mini Stock, and 500cc Mini Sprint divisions, as well as the return of the “Mountain Man” 200-lap Enduro paying $2,000 to win. General admission is $15 on Sunday with kids 12 and under admitted free. Grandstands open at 2:30 p.m. with racing at 4:00 p.m.

Did Not Start: Hunter Given, Orwell, Vt.