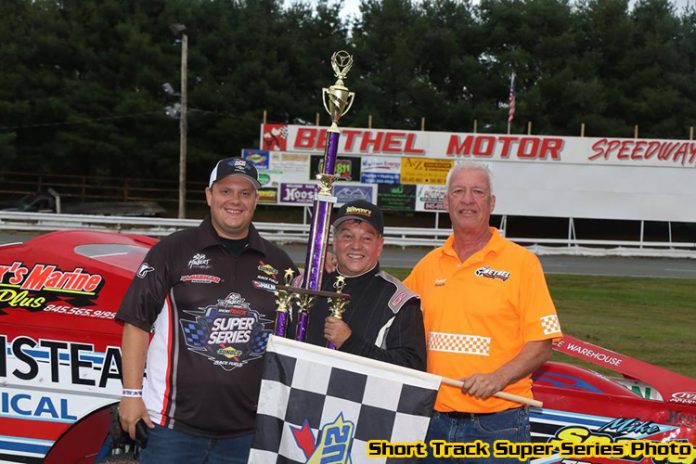 WHITE LAKE, NY – In a 69-lap event with its share of twists, turns and drama, veteran driver Rick Mill stood in the limelight Sunday afternoon at Bethel Motor Speedway.

“The lapped cars were crazy, but it’s what you would expect in a race like this,” Mill said of the 24-car starting field on the tight bullring. “It was a pleasure to race with this (STSS) series. I have to thank everyone involved for giving us the chance to run for this kind of money here.”

Rich Coons, like Mill a longtime dirt racer, led the field to starter Warren Alston’s green flag. Coons led the first five tours before Mill – who had rolled off second – was able to wrestle the top spot away utilizing the outside lane.


As Mill led, the action was wild in his wake. Coons ultimately slid through the infield and clipped a charging Bill Papula. Coons headed to the pit area to for his crew to examine right-rear damage and Papula’s day ended on the back of a wrecker.

Dominic Roselli moved up to second following the melee and chased Mill, feeling pressure from Jeff Richardson, who had recovered from an early race spin that sent him to the rear of the field.

Richardson cleared Roselli and spent the race’s second half chasing Mill’s No. 77.

During the final circuits, Mill began to put some distance on the field.

A final caution on lap 67 slowed the event and set up a green, white, checkered shootout.

Mill was able to gap Richardson and pick up the victory. He was joined in Victory Lane by Harry, Joan and Jeff Behrent representing event supporter Behrent’s Performance Warehouse.

Goshen, N.Y.’s Richardson, running as a teammate to 2017 event winner Ed Dachenhausen, earned a runner-up effort. Montgomery, N.Y.’s Coons miraculously rebounded to finish third despite his No. 27 sitting over on the right-rear heavily.

Jimmy Johnson of Bloomingburg, N.Y., soldiered to a sixth-place finish. Johnson received $200 as the top Crate 602 Sportsman from Extreme Energy Solutions/Extreme Cleaner and $100 courtesy of Mike Sparta Trucking as the highest-finishing regular from Orange County Fair Speedway in Middletown, N.Y.

Completing the top-10 were Chris Raser of Milford, Pa. in a car wrenched by Kirk Horton and family; Mahoning Valley (Pa.) Speedway regular Jeff Parker of Havertown, Pa.; Bryan Jones of Monticello, N.Y.; and Travis Green of Wallkill, N.Y., who received a $100 bonus as the top-finishing Accord (N.Y.) Speedway regular from promoters Gary and Donna Palmer.

The Hard Charger, worth $200 from Armistead Mechanical, went to Greg Morgan who started 24th and finished 11th, a gain of 13 positions.

Three 15-lap ‘Semi’ qualifiers were run to establish the ‘Fall of 69’ field. Winners were Dachenhausen, Jerry Curry and Mill.

The accompanying Tri-Counties Collision ‘Woodstocker’ 40 for Street Stocks was a down-to-the-wire, thrilling affair. After leading much of the race, Kevin Skelly’s car developed a push condition allowing Walt Henry to take command. Henry fought off Brian Bauernfiend and Kyle Welsch, who had been challenging for the lead early on only to cut a tire, pit and race back through the field.

BETHEL BEATS: All drivers participating in the ‘Fall of 69’ were awarded 60 show-up points toward the STSS Open Sportsman championship battle, which wraps up this Friday night (Oct. 5) at Thunder Mountain Speedway during American Racer Cup Short Track SuperNationals 11….

After competing on the dirt Saturday night at Woodhull (N.Y.) Raceway, Dale Welty was among the last competitors through the pit gate on Sunday. Welty, the STSS Sportsman point leader, was competitive on the pavement until sustaining damage in a multi-car tangle mid-race….

Three of the pre-race favorites succumbed to issues. Bill Papula was done after the aforementioned tangle while in third; ’17 race winner Ed Dachenhausen was towed off with an apparent broken left-front spindle; and Jerry Curry succumbed to left-rear suspension issues driving a former Jackie Brown-owned car…. 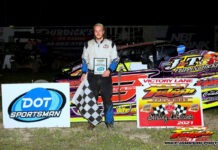